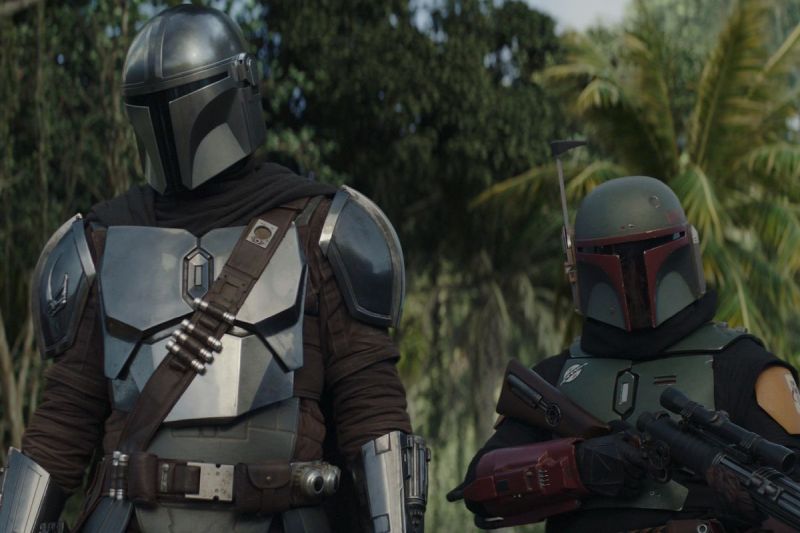 The Mandalorian: Chapter 15: The Believer

What is it ? : We see the Karthon Chop Fields, junk Walkers & Tie Fighters are worked on by various prisoners cutting them up, we see Migs Mayfeld who is approached by a New Republic Security Droid which tells him he is to be released into the custody of Marshall Dune.
Cara Dune escorts him to Slave 1 where Migs spots Boba Fett, in his freshly painted armour, and mistakes him for The Mandalorian, but realises his mistake commenting that he thought he was someone else, only for the Mandalorian to emerge. They make a deal, that in exchange for his help in locating the Child and Moff Gideons Vessel, that his sentence will be made more comfortable. So Migs tells them he can get the information from an Imperial security terminal and that one exists on the ISB mining colony of Morak, so they depart in Slave 1.
Arriving on Morak, they come up with a plan to sneak into the Imperial Base, but it requires someone whose DNA isn't in Imperial records, so Fett, Dune and Shand all cannot accompany him, so The Mandalorian agrees to. However this will mean that he cannot wear his armour, but he comes up with a plan.
The group captures an Imperial Cargo Juggernaut and Mayfeld and the Mandalorian take the uniforms and most importantly helmets of the two pilots, however Mayfeld soon discards his helmet. As they drive their cargo of volatile Rhydonium to the Imperial Base, they talk, with Mayfeld defending his past actions, telling the Mandalorian that everyone has standards, but they all let them slip bit by bit. For example, is the Mandalorian Creed that he must not remove his helmet, or that he must not show his face, as the Mandalorian now seems to be breaking the first. That everyone has lines, until things get messy.
As they drive through a settlement, Mayfeld comments that to the people that live here, both the New Republic and The Empire are invaders on their land, and soon they hear over the Juggernauts radio as other transports are being attacked, and they see explosions in the distance.
Soon locals on speeder transports approach and begin boarding the upper hull of the Juggernaut to plant Thermal detonators on the cargo, so The Mandalorian begins fighting them off, firstly with his blaster, but then hand to hand when his blaster runs out. He defeats several waves of the raiders, but things look desperate as they need to slow down as they approach a rickety looking bridge, but Tie Fighters and other Imperial forces come to their rescue forcing the raiders away, and cheering them as they enter the Imperial base.
To the cheers of Stormtroopers and other Imperial military, they disembark from the Juggernaut and locate the Security terminal in a mess hall, but Mayfeld recognises one of the officers inside, and without his helmet is worried that he will likewise be recognised. The Mandalorian offers to go in his place, but Mayfeld tells him that the system will require a facial scan, and that it won't work while he is wearing the Helmet, but the Mandalorian insists.
He heads to the terminal, entering the key Mayfeld gives him, but it is about to set off an alarm as it scans his helmet, and he quickly removes it to allow the scan to complete. But the Imperial officer notices him acting oddly and begins to approach, as he completes downloading the information on Moff Gideons location.
The officer questions the Mandalorian, who tries unsuccessfully to bluff his answers, but doesn't know key information such as his TK number. Mayfeld suddenly begins answering on his behalf, telling the officer that the Mandalorian was wounded by an explosion, and hasn't been the same since.
The officer congratulates them on successfully being the only transport to deliver it's load that day, offering them a drink. As they drink, Mayfeld brings up Operation: Cinder, and speaks to the officer about Burnin Konn, where not only did the Empire exterminate the entire city, but Mayfelds entire division was killed, 5 to 10 thousand soldiers, and the officer calls them heroes of the Empire, and at thay Mayfeld pulls his blaster and guns down the officer.
The two fight the now alerted Imperial forces, smashing their way out onto the side of the building, above a waterfall. As they climb, they are assaulted by Imperial troopers, but Cara Dune and Fennec Shand have taken up sniper positions and defend the two as they try to reach the top of the building.
As they do, Fett pilots Slave 1 down and the two leap aboard, before Mayfeld grabs Fetts Cycler rifle and fires on the Rhydonium storage tanks which explode destroying much of the base.
As Slave 1 races away, two Tie Fighters chase it, and Fett launches a Seismic Charge from the rear of the ship which explodes destroying them.
Later, Dune and Shand arrive at the landed Slave 1, and Mayfeld tells the Mandalorian that he never saw anything back at the base, referring to the fact that he saw his face, and then holds out his arms to be restrained and returned to prison, but the Mandalorian ignore him and talk about how sad it was that he had been killed in the explosion. Mayfeld is confused, but the Mandalorian waves him away.
Later aboard Moff Gideons Arquitens Cruiser, the communications officer tells him they've received a communication, and he watches a recording of the Mandalorian repeating the same speech that he had given at the end of season one, "You have something I want. You may think you have some idea of what you are in possession of, but you do not. Soon, he will be back with me. He means more to me than you will ever know." . . .

High Points : Another rock solid episode, and one which as well as some great action, manages to somewhat humanise the forces of The Empire somewhat. Mayfeld shows how the Empire doesn't care what happens to it's own people, and we see the Imperial forces jubilant when some of their own survive the attack on the Juggernaut. Although the officer manages to be evil enough to keep the Empire as the villains, it's really nice to see some humanity added to the faceless forces of the Empire.

After a few episodes where I've been critical of the amount of call backs to previous episodes and movies, I feel like this episode gets it exactly right. We get Juggernauts, which we've seen in Revenge of the Sith and Rogue One, but they're just older vehicles, familiar without being just added for fan service. This is definitely the Empire we know, although a dirtier, more worn out Empire. For here, the Stormtroopers aren't the gleaming white troopers we saw aboard the Death Star, they're muddy, dirty, and worn. We're seeing the Empire past it's peak, where it can't get new equipment and standards are dropping, really selling the time period.

I have to complement Pedro Pascal's acting in this episode, usually we don't get to see his face, so his acting is all with his physicality and voice. However this time we do get to see him act, and I really liked it, as to me he came off as confused as to what to do with his face. Here is someone who has never used facial expressions to communicate, so he comes across as slightly slack jawed and as if he's not all there mentally. Something that Mayfeld jumps on to explain his lack of answers, that he'd taken a head wound and hadn't been the same since.

Low Points : There's nothing too much I want to criticise in this episode, except some of the stuff about the helmet. The Mandalorian has to remove his helmet so the Imperial terminal can scan his face. But this scan doesn't seem to be like the fingerprint scan my phone does, or the facial recognition that my phone can do, but rather just a scan to make sure you actually have a face. It's not security as I'm aware of it, unless the Empire really has a big problem with faceless people stealing its data.
Also, after the officer approaches the Mandalorian, there's nothing to stop him putting his helmet back in. In fact, it would have probably helped with his disguise, as he could have put the helmet back on as part of "straightening his uniform" as an officer spoke to him, slipping it back into place as he stood straight and said "yes sir".

I also find it rather stupid that The Mandalorian rather stupidly warns Moff Gideon that he's coming for the child. While it's really cool that he uses Gideons speech back at him, telling an Imperial Moff that you're about to attack seems a little silly and tactically unwise.

So what do you really think ? : I adored this episode, although the action wasn't quite as good as the last episode which I rated just as highly, this episode manages to be better on the world building and storytelling, and while it has great action, that's not where the real joy of this episode lies.

Final Words : So one episode left, and it's not going how I thought it would. Last time I thought this episode would be about building the team to rescue the child, and that rescuing Mayfeld would take up most of the episode, something which was actually dealt with before the titles. So unless we get a similarly rapid team building segment, as the Mandalorian gathers his team, we're actually going to get a much smaller team of just the Mandalorian, Boba Fett, Fennec Shand and Cara Dune, allowing more time to be spent with each, with is probably preferable.