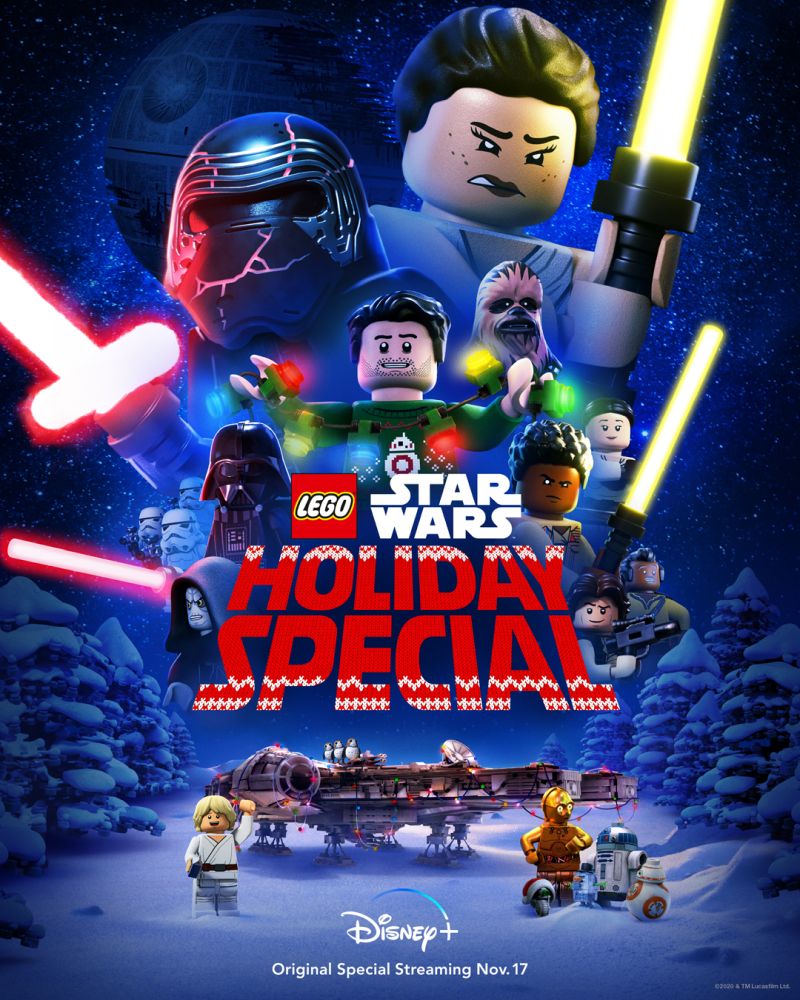 What is it ? : Set after Rise of Skywalker, the Galaxy is preparing to celebrate Life Day, since they are free to do it once again after the fall of the First Order, and the heroes have travelled to Kashyyyk to spend time with Chewbacca's family.
Rey is aboard the Millenium Falcon training Finn to be a Jedi using the Blast Helmet and training remote, but he doesn't seem to get it, so while the others, Poe, C-3PO, Rose, R2-D2, etc all prepare decorations aboard the ship, Rey studies the ancient texts of the Jedi looking for how she can train Finn better.
In one of the books she finds mention that to visit the temple on Kordoku on Life Day where a key to the galaxy's past will help make a Jedi's future clearer.
So she departs in her X-Wing with BB-8, while Chewbacca's family of Malla, Itchy and Lumpy all arrive and the party starts to fall apart as it's not been organised very well.
On Kordoku Rey discovers a Jedi Temple, and inside she finds a crystal relic which opens a portal to the past, stepping through she witnesses Luke training under Yoda on Dagobah, and thinks she can learn from watching past Jedi Masters teaching their apprentices.
She then transports herself to the Trade Federation Battlecruiser as Obi-Wan and Qui-Gon await the meeting with the Trade Federation and are gassed. She then visits Obi-Wan and Anakin as they ascend the lift to meet with Amidala after the assassination attempt on her life, but the pair spot her and ignite their lightsabers.
Portalling out she appears in Luke's X-Wing cockpit as he makes the trench run on the Death Star, before returning to Kordoku again. BB-8 warns her of the danger of meddling in time, but she just wants to see one more Master and Apprentice, but using the crystal takes her to see Palpatine and Vader aboard the Second Death Star.
Palpatine recognises the Crystal as powerful, and rejecting Vaders Life Day present of a "Galaxy's Best Emperor" mug, he commands Vader to get him the crystal, and Vader follows Rey through the portal back to Kordoku.
The two begin battling over the Crystal, but another portal opens up, and they end up at the Battle of Hoth where they encounter another Vader, and some Snowtroopers join the fight. Through another portal they fight over the lava of Mustafar as Anakin and Obi-Wan duel, before ending up on Nevarro where they stop fighting to observe that Grogu is "so cute".
They then end up on Anakin Skywalkers Pod Racer as he competes with Sebulba, and a series of portals lead to them gathering more and more characters such as Clone Troopers, various Han Solo's (who shoot first at Greedo) and Obi-Wans (who all greet each other with "hello there"), Sith Troopers from the Xyston Star Destroyers around Exogol, until they land in the desert of Tatooine as a young Luke Skywalker stares out at the setting suns drinking Blue Milk.
A large fight breaks out, but Rey, Vader and young Luke end up falling back through the portal to Kordova, where Vader takes the crystal and returns to Palpatine on the Death Star 2, leaving Rey and young Luke stranded.
Palptine takes the crystal and wants to see his own personal future, where he assumes he rules the galaxy, so opens a portal to 30 years ahead.
Kylo Ren is shirtless in his throne as Supreme Leader, when Vader and Palpatine arrive, and Kylo is excited to see Palpatine and his Granddad, although reveals Vader's final betrayal to Palpatine who recruits Kylo as his new apprentice.
Meanwhile back on Kashyyyk, Poe is sad that the party has gone wrong, but Rose has invited Max Rebo who plays traditional Life Day music and the party kicks off, with Lando, Jannah, Zori and Maz Kanata all arriving.
Back on the Second Death Star, Palpatine sends Vader to get Luke from the Forest Moon of Endor, although Kylo warns him that's how things went before.
At Kordova Rey thinks she has failed, and Yoda appears to her, showing her friends, and showing her that what the other Jedi Masters had with their apprentices was friendship, but she had put Finn down about his failure, so hadn't been a good friend. Realising the power is within her all along, she summons down crystals from the walls of the Jedi Temple and creates another portal, arriving on the Death Star to confront Palpatine and Kylo.
She, along with the two Lukes, battles Vader, Kylo and Palpatine, and Palpatine looks triumphant, asking Rey to take her place at his side as his new apprentice, however Vader grabs him and throws him down the reactor shaft. As he falls, Palpatine finds the spirit of Life Day and repents, saying he doesn't want to conquer the galaxy any more, however he then impacts the reactor and dies.
Rey returns Young Luke to Tatooine, and restores everyone who has been battling there to their own places in time, before returning to the Millenium Falcon and celebrating Life Day with her friends and patching things up with Finn, as it begins snowing and they all rush out to see it.
And things end with Yoda saying Life Day is a time for family and friends, and wishes you a happy Life Day.

High Points : Okay, it's Lego, it's for kids, so you shouldn't expect too much. But for what it is, it's pretty good. There's a bunch of laugh out loud lines, and some really good observations about Star Wars (the "hello there" meme, and Han shooting first jumps to mind), and I especially love the Yoda, Luke dialogue on Dagobah,

Yoda: Do or do not, there is no try!
Luke: But isn't trying, like, a good thing?
Yoda: Participation Trophies for Jedi there are not!

I think the fact they named it the Holiday Special, sets the tone that they're really not taking it seriously and setting the bar low for expectations.

Low Points : Was Life Day a real priority for the First Order? And since they seemingly ruled for only a very short time (beginning of Force Awakens to the end of Last Jedi is only a matter of days. and Rise of Skywalker is apparently only 6 months later), so did any Life Days actually occur under the rule of the First Order?

But, trying to nitpick this is rather stupid, so while there's some silly decisions here, I really shouldn't try to overthink it.

So what do you really think ? : I enjoyed it, it was a bit silly, and not an unpleasant way of spending Christmas Eve.

Final Words : I usually stat out the silliness I choose to review at Christmas, the Ewok Movies, and the Holiday Specials, but since most of this is set within the timelines of other movies, I think I might be a little stretched to find anything to do. Oh well.