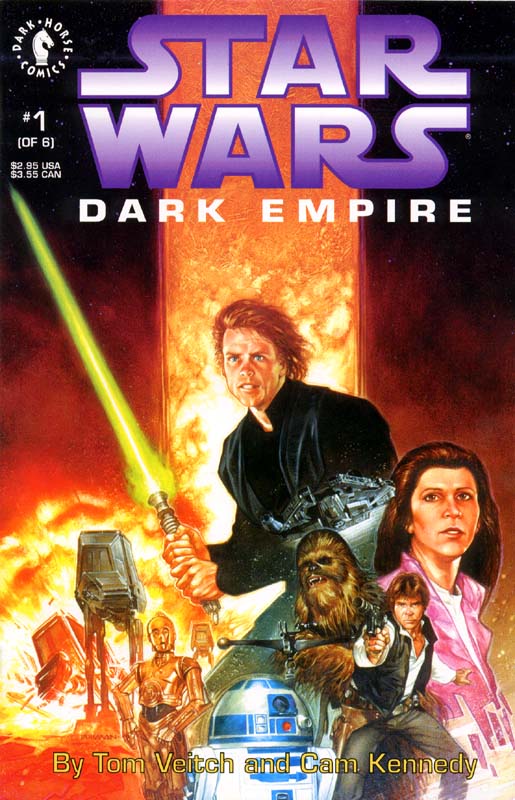 Dark Empire 1: The Destiny of a Jedi

What is it ? : The Star Wars Scroll (or just angled text in a comic) does a lot of heavy lifting to set the scene. The time period is after Return of the Jedi, and the New Republic has been fighting the remnants of the Empire for a number of years, and without thousands of Jedi Knights to enforce the peace, the Republic is faltering, and has lost control of many systems, including Coruscant (called the Imperial System in this comic), however civil war has broken out in the Imperial Remnants, allowing the Republic to use captured Star Destroyers on hit and run attacks.
In one of these attacks, Luke Skywalker, Wedge Antilles and Lando Calrissian have crashed their Star Destroyer, Liberator, into the Imperial City and are holding out against the massed Imperial Forces there.
Han Solo and Princess Leia are aboard the Millennium Falcon on a daring mission to rescue their friends.
The Falcon emerges above Coruscant into a massive debris field, with wreckage from destroyed Star Destroyers, Tie Fighters, Y-Wings and many others blocking the way. The Falcon nimbly dodges through the field, as does the Nebulon-B Frigate Antares Six, however the other Nebulon-B, the Rebel Star is destroyed. As they drop down from orbit, they see the surface is covered with the wreckage of war machines and years of battle, as AT-AT's stride through fields of crashed Tie Fighters and gargantuan Tank Droids., until they spot the survivors of the Liberator under siege from Imperial Walkers.
Using the ships guns, they take out the walkers, and land, meeting with Lando and Wedge, however Luke is missing, having sensed the Dark Side and headed off into the ruins just after they crashed. But as they speak they come under attack from Scavengers, who are raiding for all of the technology and weapons scattered across the battlefield, and begin attempting to strip the Falcon for parts. The Scavengers release Cyborg Battle Dogs against the heroes, but Leia channels the force as Luke has taught her, and sends them flying.
The Scavengers then activate Weapons Droids, but Luke emerges from the ruins, and crushes their internal systems causing the Scavengers to flee. However an AT-AT spots him and opens fire, but Luke simply reflects the energy bolts back towards the walker damaging it, and then with Yoda's refrain of "size matters not" in his head he pulls the Walker to the ground, destroying it.
He tells Han and Leia to rescue everyone and flee this place, as he senses the Dark Side stronger than he has ever sensed it, so must remain to investigate, and as they argue with him, a Hyperspace Wormhole opens, and as he heads into it, he warns Han and Leia to protect their children as they are the future of the Jedi, and they should not underestimate the power of the Dark Side.
And as Han, Leia, Wedge, Lando and the rest of the Liberator survivors flee, Luke is drawn up into the Wormhole along with various pieces of scrap from around him, as Luke senses that his mere presence on this planet has attracted the attention of a hatred so strong it has warped space itself, and his mind touches another user of the force, Luke's mind represents the very essence of a Jedi, and the other Dark beyond Darkness.

High Points : Now, I'm going to struggle with this one a bit, as although I remember at the time loving the scale of it all, wars which have left Coruscant scattered with the wreckage of War Machines, while the planet is barely reachable due to the field of debris from years of fighting. But now it just seems a little silly, everything is turned up to 11, and given this is Star Wars, that's saying something.
However, if that's what you're looking for, Dark Empire delivers, it's Star Wars taken to the max, with Luke capable of just shrugging off the effects of an AT-AT's guns (seem familiar anyone?), and then just crushing the vehicle with a gesture. Where evil creates galaxy spanning Hyperspace Wormholes to transport Luke to them! It's massive, it's kind of epic, but it just seems all a bit too much for me now.

Low Points : Wow the scroll text at the beginning really does a lot of heavy lifting, telling the story of years of warfare where the New Republic is basically failing against a unified Empire, but as the Empire fragments, the battle is more equal.
I honestly can't remember if this was just sprung on us, or whether these events took place in other books and comics, but I really think it's the former as the events I remember reading about don't really match up with these at all.
Leia's training as a Jedi is also quickly glossed over, as she seems more powerful than Luke was in Return of the Jedi, although Luke is now off the charts powerful.

So what do you really think ? : I remember loving Dark Empire at the time, but it seems a little rushed, with events just spilling onto the page without telling a story, and it just seems too much. I know many people love the EU (now Legends), but Dark Empire itself is one of the reasons why I'm kind of glad it's been made non-canon (and I know that's not going to win me any popularity contests).

Final Words : So there's six issues of Dark Empire, six of Dark Empire 2, and 4 of Empires End, so we're going to be sticking with Dark Empire for a while, hopefully it reminds me of why I liked it back when it was published, or at least serves a lesson as to why wiping it from history was the right choice.