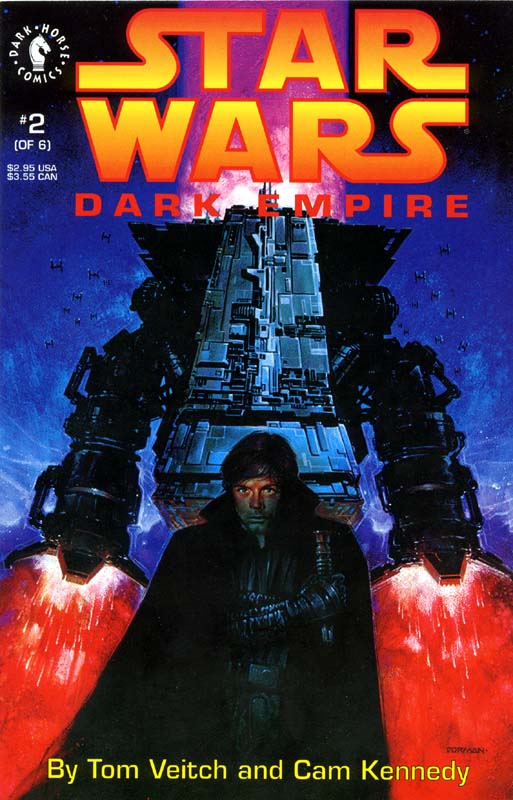 What is it ? : The New Republic Fleet is in orbit around Da Soocha V which houses Pinnacle Base one their massive strongholds. Admiral Ackbar is speaking to Mon Mothma who updates him on events in the last issue, and Ackbar reports back that the Millenium Falcon and the survivors of The Liberator are emerging from Hyperspace and landing at the base.
Informing Mon Mothma on Luke's disappearance into the Dark Side Wormhole, Han, Wedge, Lando and Leia are informed that events are occuring across the galaxy, as the sides in the Imperial Civil War seem to have united and retreated together into uninhabited areas of the Deep Core. Meanwhile new machines, World Devastators have been unleased on Mon Calamari where they consume raw materials as they move across the planet and using furnaces and forges within their holds turn them into new weapons of destruction. Wedge and Lando are ordered to take control of another captured Star Destroyer and lead the defence of that world, while Han and Leia remain behind aiding in integrating the forces which are joining the Republic in their battle against the Empire.
Meanwhile across the galaxy Luke is prisoner in the hold of a Mandalorian Dungeon Ship designed to carry Jedi prisoners. He uses the force to look beyond the hull of the ship, where he senses the evil emanating from the world of Byss where they have just arrived.
He is herded out of the ship into a force cage, used to restrain Jedi where he is taken to a large chamber where guards threaten him, but Luke hurls them away telling them he goes where he wants. And he is guided to a throne upon which sits Emperor Palpatine.
Palpatine explains how his flesh does not easily support the Dark Side, and the Death Star II was not the first, nor would it be the last time he has died. He explains that the Rebels have had years to dominate the galaxy, but without the Jedi they have failed, therefore he is going to lay claim to it once again. Offering Luke his fathers place at his side, offering him control of the World Devastators.
As Luke grasps his Lightsaber he has recovered from R2-D2, the Emperor points out the futility of his situation, even if he strikes out in anger and kills Palpatine once again, the Emperor will live again. But if he joins Palpatine, and learns the secrets of the Dark Side, then perhaps he will be able to defeat him in the long run.
After contemplating the situation, Luke drops his lightsaber and kneels subserviently before the Emperor.
Back on Da Soocha V, Leia senses the loss of Luke to the Light Side, and telling Han that Luke needs her, as together they can defeat the darkness, Han orders the Falcon fuelled and prepared to fight the Dark Side once more. . . .

High Points : I'm still not overly impressed by the story, as the World Devastators make little sense, mobile factories which churn out new weapons as they harvest the materials of the planets they lay waste to. While it's an interesting version of the Grey Goo theory, where the machines create more machines until everything is consumed. But in Star Wars we've never seen factories work this way before, being able to create weapons of war in mere hours or minutes, makes me wonder why the Empire didn't field better and even more numerous ships during the Galactic Civil War.
But the one element I am impressed with is Palpatine. His use of clones does create an interesting dilemma for Luke. Even if he can kill someone without turning to the Dark Side, with Palpatine it does help at all, as he will just jump into a new body. It also makes sense of why Palpatine gets old and withered during Revenge of the Sith, but isn't really any older or more withered after using the Dark Side for 20 years during Return of the Jedi (and why he looks different between the original cut of Empire Strikes Back and Return of the Jedi).
The ending is clear already though, as Luke can strike down Palpatine by defeating the cloning process, although I can't remember if there's going to be an element of tension as to whether he can withstand the corruption of the Dark Side long enough to bring this plan forward.

Low Points : Han stays at Da Soocha V because new planets are now just joining the Republic? What? Even after all these years, after 2 Death Stars, after all the atrocities of the Galactic Civil War, only now are some planets deciding that, "hey, maybe this Empire is bad after all"?
Seems to me that there really shouldn't be any fence sitters left by this point.

So what do you really think ? : It's still massively over the top, and even the interesting element of the story, Palpatine being back through cloning, is kind of turned up to 11, "The Emperors back, and now he's got infinite lives!".
But I am somewhat intrigued as to what they'll do with Luke and Palpatine, although I'm ready to be disappointed.

Final Words : Misspoke in the last review, as there's only 2 issues to the final part of Dark Empire, Empires End. But that's still 14 issues of this series I'll be covering, which should occupy us for the majority of this month.