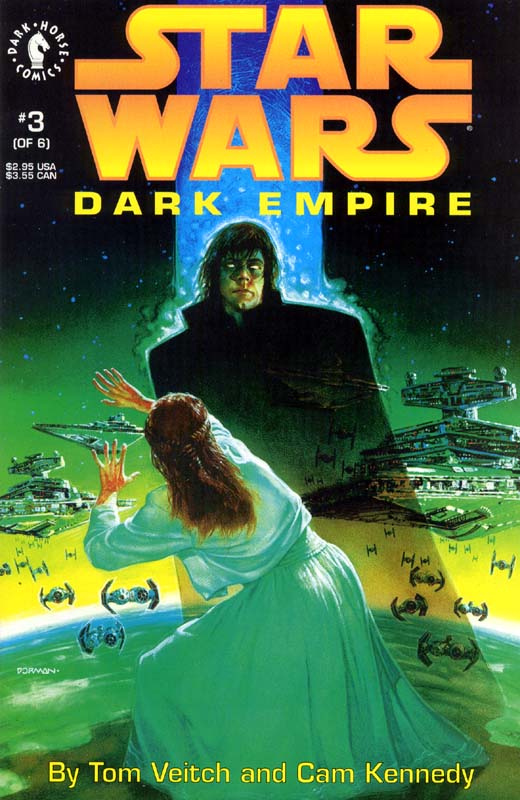 Dark Empire 3: The Battle for Calamari

What is it ? : We pick up with Lando commanding the Star Destroyer Emancipator against the Imperial Forces, including World Devastators, attacking the world of Calamari. The Super Star Destroyer in command of the Imperial forces, the Allegiance, is broadcasting footage of the attack, which allows Lando to calculate a perfect Hyperspace emergence for his fleet, coming out of Hyperspace and opening fire on the Imperial vessel before they can even raise their shields.
The Allegiance is destroyed, and the Imperial fleet overwhelmed allowing the Republic forces to enter orbit and begin supporting the Mon Calamari forces below. The World Devastator now leading the Imperial forces, the Silencer-7, informs Supreme Leader Skywalker of the Republic attack, and releases a wave of new fully automated Tie Fighters which swarm the Republic fighters which have entered the atmosphere, showing how outdated the Republic X-Wings are now.
Lando take the Emancipator down into the atmosphere to attack the World Devastator, but the massive factory vessel forces the Star Destroyer into its furnaces where it is melted down for its raw elements, causing Lando to have to order his crew to the Escape Pods.
Back on Da Soocha V, Han is instructing new recruits, and introduces them to a new type of fighter, fresh from a world which has just overthrown the Empire and joined the Republic, the A-9 Vigilance, also instructing the recruits that they've just finished the replacement for the X-Wing, the E-Wing, but have overloaded it's weapons so much that they occasionally explode. But these new fighters give them a chance against the new Tie's.
Leia is meditating, and sees a vision of Darth Vader, but realises it is not her father, but her brother Luke, who tells her not to follow him, and she collapses. As she awakens, she tells Han that her brother is in trouble, and the two prepare to leave, heading in the Milleninum Falcon to Nal Hutta.
While Han and Leia are wanted criminals in the Hutt Empire for the murder of Jabba, they need access to the smugglers there to gain access to the Deep Core where Luke has been taken.
As they arrive they are almost instantly spotted by Bounty Hunters and the Falcon is chased between the skyscrapers of the city, fleeing into the hangar of a old friend of Hans, Shug Ninx, who is partnered by an ex-lover of Hans, Salla Zend. Leia tells Salla that she and Han are married, and Salla offers her commiserations, telling Han that the only ship that can help him into the Deep Core is the Starlight Intruder, which currently is having a Hyperdrive fitted.
With time to kill, Han takes Leia to show her the city where he once lived, and they encounter an old woman, Vima, who recognises Leia as a Jedi, offering her a small box, before they head onto Hans old apartment, where his Droid, ZZ-4Z informs him that he has a guest, one Mister Fett.

High Points : There's a few interesting ideas in here, almost lost among the need to make everything bigger. Firstly, the idea that Han expresses as "If he's such a great Jedi, why do I keep needing to rescue him?", that while Luke is potentially very powerful, but Han is a rogue element which changes the balance in the favour of the heroes. Yes, Han can't shoot Vader in Empire Strikes Back, but he does introduce a random element which lets Luke succeed (by shooting Vaders fighter in A New Hope for example).

They also do a good job of making Han useful to the Republic. While he is militarily capable, here he truly excels in who he knows, having contacts among smugglers who regularly make deliveries to the Imperial Worlds in the Deep Core. So know exactly how to circumvent Imperial security and patrols. This makes a lot of sense, the Empire isn't a perfect organisation, and it's officers like to indulge in various "illegal" substances and habits, so turn a blind eye and even positively encourage smugglers. Smugglers who Han knows and can help him out.
This is done much better than Star Wars often handles criminal organisations, usually putting them out there as a third faction against the Empire and Rebellion (I'm looking at you Black Sun, Zann Consortium,The Hutts and even Talon Karrde). But here they're just criminals, falling between the cracks, providing a service to the Empire, and capable of getting places that the Republic cannot.


Low Points : I have to point out that the Allegiance, described as a Super Star Destroyer, looks completely different to the Executor. This has been retconned later by saying it's an Allegiance class Star Destroyer, but really it's just down to Cam Kennedy's art style where instead of accurately depicting the vessels, they're more of impressions of what a Star Destroyer should look like, which means that Dark Empire has more new types of Star Destroyer than any other resource.

I've got to question the continuity as well. At the end of last issue, Han and Leia were preparing the Falcon to launch as they "had a date with the Dark Side", but this issue Han is just teaching new recruits and it's not until Leia has her vision of Luke as Vader that they prepare the Falcon once again to hunt him down. Now did the writer just forget, or did Han and Leia get all ready to leave, then realise that they had no idea where they were going to look, so just forgot about it for a while? It's easily fixable in story, but just is notable for it being the dramatic ending to the last issue, where they're off to rescue Luke, but then this issue it's halfway through when they remember they were actually going to go and rescue Luke.

So what do you really think ? : The story is getting better, but only in the moments where it's not trying too hard. The first half of the issue, where Star Destroyers are getting eaten by World Devastators, and there's an ongoing escalation between the new fighters of the Empire, and the new fighters of the Republic, is pretty boring. But once we get into Han using his old contacts to help smuggle them into the Deep Core, and we get some personal moments as Han questions Luke's almost mythical status as a Jedi, and Salla hints at her and Han's history, it's far more interesting.
It's definitely the details which are interesting here, rather than just the massive broad strokes of titanic war machines clashing in the skies over Calamari.

Final Words : I'm not holding out much hope for Dark Empire redeeming itself as a classic, but it is proving to have some interesting ideas an moments, and perhaps those can make it stand out as a story rather than just having to make everything bigger.