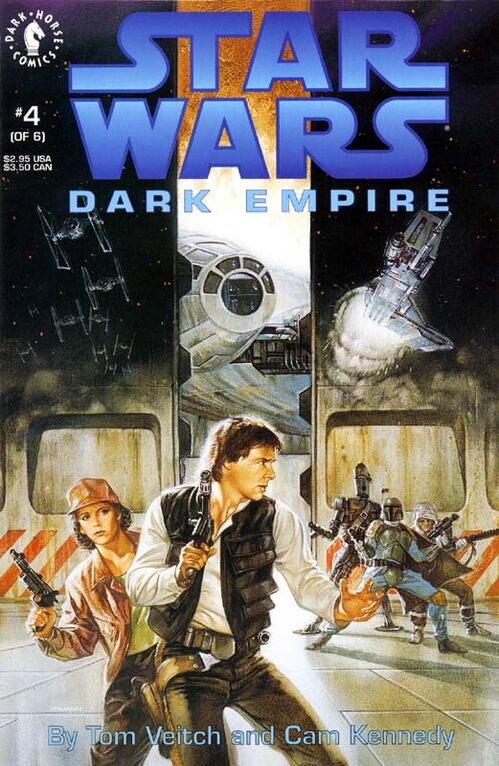 What is it ? : Inside Hans old residence on Nar Shaddaa is Boba Fett, who tells Han that the Sarlacc found him somewhat indigestible. A gun fire begins as the Hutts have bounties on both Han and Leia for the death of Jabba, and the pair flee through the streets of the city chased by Boba and a large group of other Bounty Hunters all wanting the reward.
After a few streets, Boba fires a rocket at the pair which knocks a Hutt from his Repulsorlift Floater to his doom, allowing Han and Leia to leap aboard it and fly it up to the Starlight Intruder which is now ready and has the Falcon docked on it's back. As the vessel jumps to Hyperspace, Leia opens the box given to her by Vima to find that it contains a lightsaber, and as she touches it she receives a vision of Luke directing the Imperial forces from Byss, and Lando fighting for his life above Calamari.
At Calamari, as his Star Destroyer is dismantled by the World Devastator and he escapes aboard an escape pod, sensors pick up Republic reinforcements arriving, headed by the new E-Wing fighters. An attack which is apparently successful when the World Devastator begins dropping from the skies, but aboard it the crew report that its systems have been instructed to shut down from someone on Byss and the massive vessel crashes to the surface.
The Starlight Intruder arrives at Byss, and is given permission to land as the planetary shields are opened for it, however Boba Fett is shadowing them aboard Slave II, but his vessel collides with the shields as they are slammed shut as soon as the Intruder passes through.
As the Intruder heads towards it's landing platform, Han and Leia slip away in the Falcon and head towards the command tower where Leia senses Luke is, and they are permitted to land and taken to Luke. As Sentinel guards approach them, Luke tells them that Leia will be taken to Palpatine much to her disbelief, and she ignites the lightsaber striking one of the guards, only for a gesture from Palpatine as he enters to destroy the saber entirely. The Emperor shows off a chamber containing many clones of himself, explaining that is how he survived Endor, knocking Leia unconscious with Force Lightning, and as Han leaps to his wifes defence, Luke catches him by the throat and Han tells him he is worse than his father, and Han will kill him. Luke responds that while it is possible he must die, it will not be at the hands of Han. . . .

High Points : The story is fast paced, and some of the dialogue is witty and entertaining, Han taunting that the Hutts will have a bounty on him now after his rockets knock a Hutt to his death, comes to mind. And while the story puts all the pieces into place, it doesn't feel as if much else happens here. So we know that the World Devastators are all controlled from Byss, so everything comes down to the events there. And now Han, Luke and Leia are all there with Palpatine, with Luke pretending to be Dark Side, but perhaps actually falling without realising it.

Low Points : But while all the pieces are put into place for the end game, there's not actually much happens in the issue.
Boba is introduced, and then goes out again like a fool, crashing against some force shields.
We see reinforcements arrive at Lando's battle at Calamari, but then it ends straight away when Luke orders the World Devastator shut down.
In fact the section of Calamari is so brief, that Lando never actually lands in his escape pod, watching events unfold passively from it's interior.

And the ending is being not only set up, but also signposted, as the Emperor, who can survive almost anything because his mind can leap into one of his clones, takes his most powerful opponents into the chamber where all the clones are kept, defenceless. He might as well have installed a self destruct system with a big red button marked "don't press".

So what do you really think ? : I haven't really mentioned before, but after each comic there is a few pages of text which fill in background information about the events which just occurred. As an example, for this issue it talks about Luke having been the one to order the World Devastator deactivated, as he struggles to defeat the Empire from within. However the Emperor is aware of this, and is sure of Luke eventually turning to the Dark Side due to his continued actions, that the cost of one World Devastator is worth the end reward of a new Sith at his side.
However, this is completely lost from the Graphic novel format of the story, and its not that the text is just misplaced at the end of the entire story, but that it's entirely missing.

Final Words : Well, Dark Empire 1 isn't impressing me much, it's tried too hard by introducing big stuff, trying to entertain by just bigger stuff, and bringing back favourite villains such as Palpatine and Fett, which reminds me a lot of the latest Disney stuff. There's been a lot of talk about how Rise of Skywalker copied Dark Empire with it's returned Palpatine, but now with Boba Fett back in the Mandalorian, I'm starting to feel as if all of new Star Wars is getting based off what's between the covers of Dark Empire.