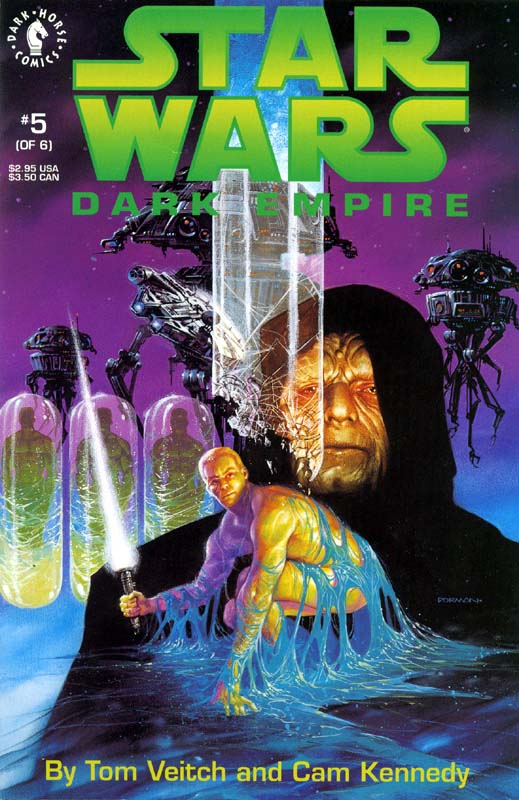 What is it ? : Shug Ninx and Salla Zend aboard the Falcon have taken refuge with another smuggler, hiding the ship in it's cargo hold since the Empire detected and impounded the Starlight Intruder. They pick up a signal from Han asking for help, so launch to head back to the tower where they dropped him and Leia off, but are intercepted by a giant probe droid which drags them into a hangar in it's belly.
Meanwhile Leia is alone with Palpatine, who tells her that he is dying, and shows her a Jedi Holocron, telling her than if she joins this weak old man, he will teach her the secrets of the Jedi, but he detects that she is pregnant, and tells he her can live on in her child and she flees with the Holocron.
She heads to Luke, trying to break the Dark Side's hold over him, but he tells her that she has done that already, but he must remain to defeat Palpatine, but she seemingly convinces him to help her rescue Han and escape.
Han is locked in a holding cell, and notices from the window a giant probe droid drawing close, aboard it Shug Ninx has rewired it seizing control, and cuts through the wall to rescue Han. Leia and Luke arrive, and although Han is initially suspicious, they all board the Falcon to flee Byss.
As they leave, Luke fades away, revealing that his presence here has been an illusion to convince Leia to get to safety with her unborn child.
Back in the tower, Palpatine heads to his cloning chambers, to move his mind into a new clone as his current body is failing, but Luke awaits him there. Luke begins smashing the cloning tubes, and killing the inert clones within, but Palpatine manages to move his consciousness into one before Luke gets to them all.
The new clone body of Palpatine, naked, dripping with gell from the cloning vat, grabs a lightsaber from a display on the wall, and Luke and Palpatine clash sabers. . . .

High Points : Well, it's all action this time, and action centered around the characters, rather than around giant war-machines and nameless minions clashing in their thousands. This makes it far more interesting, and having Luke, Leia and Han running around inside an Imperial base, feels very familiar and very Star Wars.

Low Points : The giant probe droid feels extremely silly, it looks like a Probe Droid, and when first seen it could just be a normal probe droid, but closer to the viewer, so larger just because of perspective. But then it tractor beams the Falcon aboard it's hangar, and you realise not only is it a probe droid, but it's a hundreds of times the size. It just feels silly, like if the AT-AT's in Empire Strikes back hadn't been the familiar ones we know, but instead had been giant mecha Stormtroopers. Kind of cool, but extremely silly.

So what do you really think ? : Finally Dark Empire seems to have found it's feet, and that's when the battles are more personal instead of being overblown. Leia face to face with Palpatine, protecting the unborn child in her belly, Han and his friends organising a jail break, it's all very small in scale, so believable and much more enjayable.
I still couldn't care less what happens with the World Devastators on Calamari, and to tell the truth they're completely inconsequential to what the story is actually about, but I really want to know what happens next with Luke fighting Palpatine, and how Han and Leia escape from Byss.

Final Words : So who wins?, the naked Palpatine, or Jedi Master Luke Skywalker? Well, it's pretty obvious, although this is only the first part of a trilogy of stories, so maybe neither.