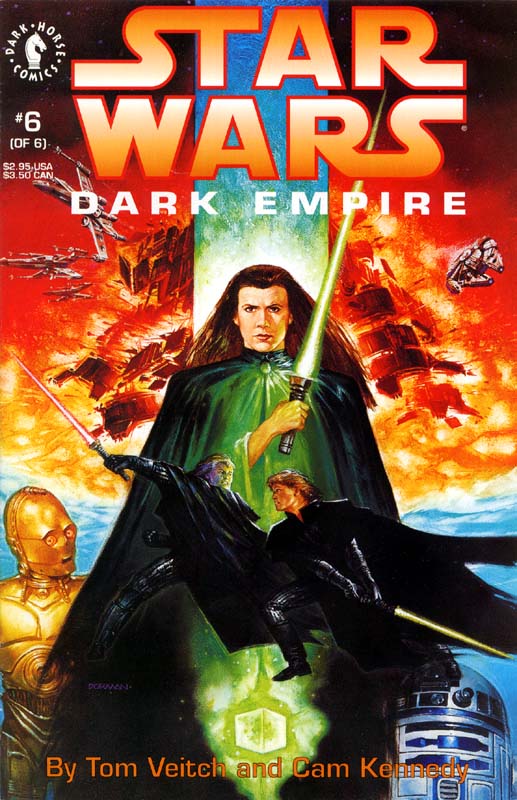 Dark Empire 6: The Fate of a Galaxy

What is it ? : Han, Leia, Chewbacca, Salla, Shug, C-3PO & R2-D2 are aboard the Millennium Falcon and they are repairing R2 as his systems were modified while he was tied into Imperial Systems, but he contains the control codes for the World Devastators, so they are taking him to the Battle of Mon Calamari.
When they arrive, he deactivates the massive war machines, however they still contain huge factories which churn out more weapons and vehicles so the battle continues to rage. However then Han comes up with the plan to crash the Devastators into one another, destroying them.
As the Republic Forces celebrate, a massive vessel arrives in orbit, clouded by the Dark Side, its weapons destroying dozens of Republic vessels, killing thousands, aboard it the Emperor reborn, with only one demand, that they hand over Leia.
To save lives, and help her brother, Leia agrees, and once aboard her lightside influence allows Luke to throw off the shackles of the Dark Side as she and her brother duel. Freed, Luke turns on the Emperor, proving himself to be a better combatant, but the Emperor decides to take it to a larger level, unleashing a Force Storm which will not only destroy the Republic fleet, but possibly also the planet below.
Luke and Leia join their power together, taking the storm from Palpatines hands, and turning it on his own vessel which is consumed by the dark energy, as Luke and Leia leave aboard a shuttle as Luke admits his failure was thinking he alone should fight the Dark Side, where the power of the Jedi were in their numbers.

High Points : While I'm not overly impressed by the ending of Dark Empire, I did like the idea that the Dark Side can be fought together, with Jedi lending each other the support they need to defeat it's influence. And while not supported elsewhere, it makes for a good reason as to why Vader turned back from the Dark Side due to Luke acting as a beacon of the Light Side.

Low Points : The Battle of Calamari basically comes to nothing, as R2 brings back the off switch, and rather than it leading to a daring raid where they have to get him to the heart of the Imperial Systems on the command Devastator to deactivate them. Instead they just connect to the Imperial's wi-fi and shut it down remotely. They try to introduce some tension, as they have to fly close enough to get a signal through, but they just fly past and shut down the Devastators, it's just too easy.

And while the defeat of Palpatine makes sense thematically, with him dying at the hands of his own unleashed power, and Luke and Leia instead of being turned to the Dark Side, turn his power back against him. But again it's all a little easy, the Emperor summons up a magic storm, like force lightning, but big enough to destroy fleets (sound familiar Rise of Skywalker?), and the Skywalker twins turn it back on him, and he's beaten. Just too easy, and not satisfying in the least.

So what do you really think ? : Dark Empire hasn't impressed I'm afraid, and although it's interesting to see exactly how much seems to have been used for the Rise of Skywalker movie (as although I'd noticed a couple of large ideas such as the Emperor being reborn, and Star Destroyers with superlasers, it's incredible how many details start showing up when you look).

The story tried to turn Star Wars up to 11, with everything being bigger and better, but it often forgot to make the story personal, and while spectacle can be entertaining, it doesn't make a good story.

Final Words : So although the Emperor is beaten, we've obviously seen that he has a way of returning from the dead, so the story of the Emperor Reborn (again) continues in Dark Empire II, which we'll be covering next.