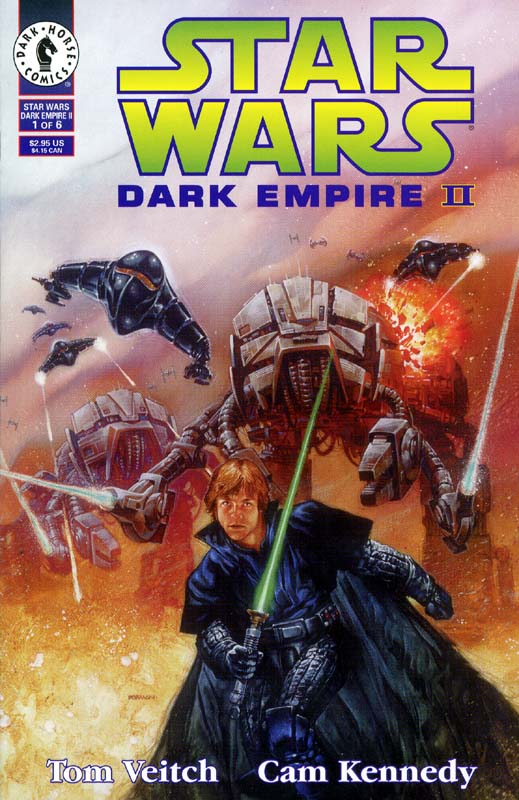 What is it ? : We begin around the Imperial Manufacturing world of Balmorra, a world which is rebelling against the reborn Emperor, but now is under siege by a fleet led by Inquisitor Sedriss. He tells the governor to surrender, but the governor points out the Empire requires the heavy weapons such as walkers that the world manufactures, especially their new SD-10 Battle Droids, which were designed by Umak Leth, who also designed the World Devastators.
The SD-10's have however been improved by the weaponsmiths of Balmorra with self regenerating armour and the latest battle tactics, whereas the forces used by Sedriss are last years model and outmatched. So Sedriss launches the latest weapons provided to him by the Empire, and developed in the Deep Core, Shadow Droids.
These droids are controlled by the disembodied brains of fallen Tie Fighter pilots, and have far faster reactions as well as experience in battle than the droids, and begin to turn the tide.
This causes the governor to release their latest weapon, the X-1 Viper Battle Automadon, which impresses Sedriss so much that he calls for a truce as he wants these for his own forces, and offers Balmorra it's freedom in exchange for selling them to the Empire.
Meanwhile on Da Soocha V, Luke Skywalker returns with a new Jedi recruit, ex-dark sider Kam Solusar, and they enter a meeting already in progress. The governor of Balmorra has offered the Republic information on the location of the shipment of X-1 Viper Battle Automadon's, so they can steal them. But Wedge Antilles and Lando Calrissian come up with a plan to not only steal these formidable droids and deny them to the Empire, but also to put Republic forces into the shipment and be smuggled into the heart of the Empire to strike at Byss.
Luke and Leia show Kam the Holocron they captured from Palpatine, and it offers them advice, telling Luke and Kam that there may remain artefacts of the Empire on Ossus, the once Library world of the Jedi. And telling Leia that she should seek out Vima Da Boda before she dies.
As they head down to the Millennium Falcon, they meet with Shug Nix and Salla Zend who intend to head back to Byss to steal back their ship, the Starlight Intruder which was impounded there, and as all set off on their missions, Luke questions Kam about Sedriss.
Meanwhile on Byss, Sedriss returns and discovers two of the Emperors Dark Side Adepts destroying the Clone bodies to deny Palpatine a new one, to retain the power they have gained. He defeats the two in battle, only to be confronted by Palpatine in a young fresh body, who congratulates him on remaining loyal, who tasks him with bring Leia back as he wants her unborn child. . . .

High Points : Unlike the original Dark Empire, this one while setting a lot up in it's first issue does seem to be getting off to a better start. We get clear missions for the heroes, Wedge and Lando off to Byss, Salla and Shug off to the same, but to retrieve their ship, Han and Leia off to Nar Shaddaa to retrieve Vima Da Boda, and Kam and Luke off to Ossus to retrieve Jedi artefacts.
While often stories like this split up the heroes, it usually seems as if this is done for no other reason that just for the drama, as they could just stay together and achieve more by doing everything sequentially. But Dark Empire 2, does manage to make you feel as if the heroes really are being stretched tightly and forced to split their number.

Low Points : Again, the Dark Empire series feels it necessary to turn the battles up to 11. Introducing the SD-9 battle droids fighting alongside the Empire, then the SD-10 which are more powerful and fresh from the weapon forges of Balmorra. Then the Empire trumps this with Shadow Droids, created in secret in the Deep Core. But Balmorra has the experimental X-1 Viper Droids. Just within one battle we get new weapon trumped by newer weapon, trumped by even newer weapon, trumped by yet another even newer weapon.

So what do you really think ? : Off to a much better start than Dark Empire, it'll be interesting to see where the story goes as everyone heads off on their individual quests. Will we see all of these happening at the same time, jumping between all of the stories, or are we going to get an issue focusing on each, and then bringing the band back together at the end?
I like the idea of the second more, as it offers more interesting story telling options. But jumping between the stories could keep tension up as we swap from a key moment and have to wait to see it resolved, But we shall see.

Final Words : Apart from still being totally over the top, Dark Empire 2 seems to have learned lessons from the first one, being more grounded with the characters, which can only be a good thing. Given I haven't read this story in around 20 years, so only remember it in the broadest strokes, I'll be intrigued to see how it all comes together.