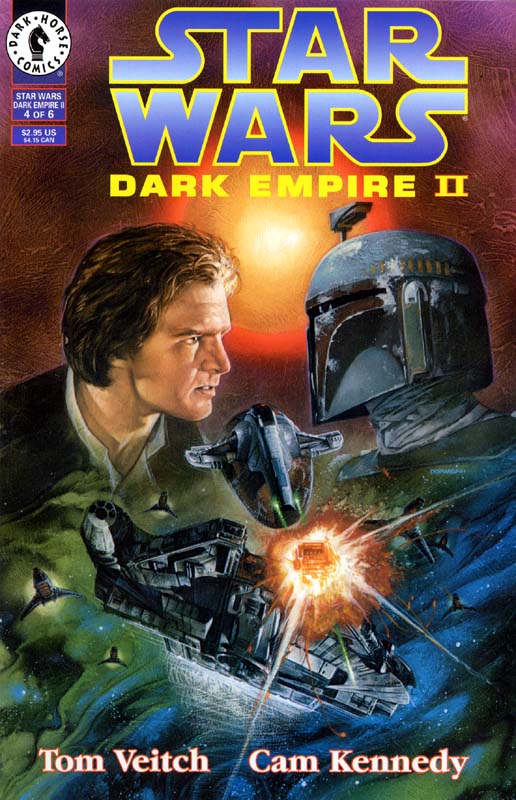 What is it ? : Hiding amongst the innards of a shipment of Viper Automadons, Lando, C-3PO, R2-D2 and some Republic Troops are smuggling themselves inside the security perimeter of Byss. The cargo transport they are aboard just happens to pass the Galaxy Gun, the massive weapon in construction around Byss just as the Emperor reborn is visiting it aboard an inspection shuttle.
He is informed of the deaths of Executor Sedriss on Ossus, and fearing that Luke is turning his Dark Side teachings against him, he empowers two of his Dark Side Adepts as full Dark Jedi.
Across the galaxy on Ossus, Luke senses this action and wonders why he hasn't managed to sense the reborn Emperor before this, and is notified by the Ysanna that they have discovered a way of accessing one of the old Jedi libraries buried under the surface of the planet.
The books have survived in the dry air of Ossus remarkably intact, and Luke notices in one of them mention of Jedi Battle Meditation and remarks that he must study that book later.
Luke recruits the two youths he found tied to Odd Bnar and takes them with him aboard the Jedi Explorer back to Pinnacle Base on Da Soocha V, although the rest of the Ysanna want to cling to their old beliefs rather than convert to being Jedi.
Meanwhile above Nar Shadaa, the Millennium Falcon is fleeing bounty hunters as it attempt to escape into space, when Boba Fett appears aboard Slave 1, and opens fire destroying one of the bow mandibles of the vessel. With the front of the ship wrecked, and the power systems down, Han limps on emergency batteries into a dangerous gas cloud near to the planet.
While Boba waits for them to emerge, the Falcon journeys deeper into the cloud, only to discover a pocket of clear space inside where they are confronted by a steam powered starship, the Robida Colossus, a vessel of the Ganathan species.
The Ganathan's are stuck in an antique era of steam powered slow space travel, and Han, Leia & Vima Da Boda are taken to the Ganathan King, Empatojayos Brand. Brand is a cyborg, little more than a head and torso, floating in a suit with mechanical arms.
He instantly recognises Leia and Vima as a Jedi, and reveals that he was once a Jedi himself, fleeing Vader and the purges he ended up here, and hopefully has used his powers to lead the Ganathan's benevolently, and wonders how much of the galaxy Vader now controls.
Back on Byss, Salla Zend and Shug Ninx discover that the Starlight Intruder, their vessel they left on Byss and have now returned for has actually been stripped down and destroyed, and watch as the Empire unloads the Viper Automadons from their cargo vessel.
Lando and his people take control of the massive war droids and begin fighting their way through the streets towards the Imperial Citadel, the droids capable of dealing with anything that the Empire throws at them, although the massive turbolasers on the citadel itself prove a worthy adversary.
Dark Side Adepts inside the citadel inform Palpatine of the attack, and he is unconcerned and annoyed at being interrupted while he is inspecting his new weapon, and tells them to release the Chrysalis Beasts which everyone agrees will destroy the War Droids.. . . .

High Points : Although I have problems with this issue, I really quite enjoyed it, the events on Ossus continue to be the high point for me, although the personal aspect of everything else continues to make this far more readable than Dark Empire 1.

The issue introduces the king of the Ganathans, Empatojayos Brand, a former Jedi who fled the purges and ended up as a limbless cripple here, although rose to power by using his force powers. He's an interesting character, hiding here in his little kingdom, fearing what is happening in the galaxy and assuming that Vader is still in charge. And interesting and empathetic character, who I'm very interested in seeing more of.

Low Points : Okay, lets get it out of the way, I hate the Ganathans, while I appreciate Steam Punk, it really doesn't work in Star Wars. Steam Powered Starships are just silly. The idea that a full civilisation is hiding inside a gas cloud right next to the biggest smuggler and pirate docks in the galaxy and has never been discovered seems quite ridiculous as well. I know the comic tells us that "no one has returned" from the gas cloud, and the Ganathans mention bringing in another one for scrapping. But if the steam powered ships are so slow as described, then almost any smuggler or pirate ship should be able to outrun them and tell everyone about this place?

Also Dark Empire continues it's path of one-upmanship, with now Chrysalis Beasts being shown to be the latest weapon which trumps the Viper Automadons, which only 2 issues ago trumped the Shadow Droids, which themselves trumped the SD-10 battle droids, which trumped the Empires SD-9's. I know the Empire is supposed to be at the cutting edge of technology, but this is totally ridiculous.

So what do you really think ? : Thought it has it's flaws, I'm enjoying what Dark Empire is doing now, following the characters rather than just showing massive battles with ever newer machines of war, which I don't care about at all.