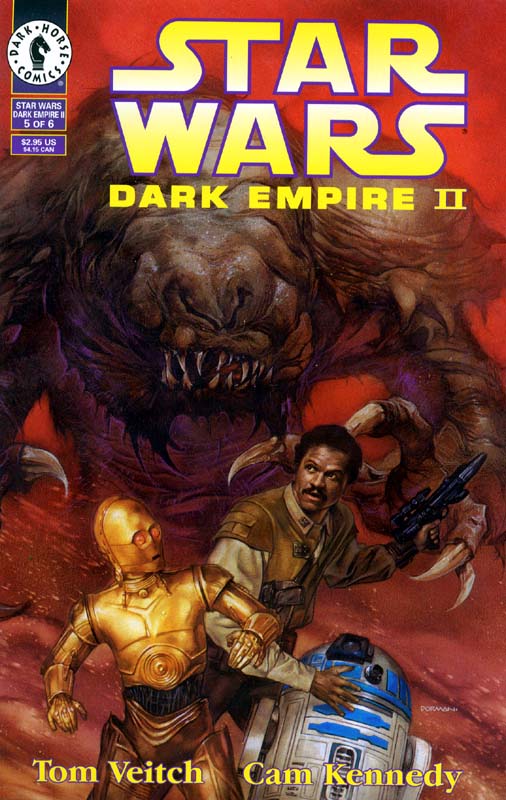 What is it ? : The Republic attack on Byss is going well, the Viper Automadons they are controlling are proving resistant to all weapons that the Empire can turn on them, and they are set to breach the walls of the citadel. However the Empire releases genetically modified Rancors, which the Viper force shields cannot protect against, so the Vipers are rapid torn apart in melee combat, causing the Republic forces to take to the ground on foot, where they are rapidly pinned down by Imperial fire.
Salla Zend and Shug Ninx watch from a nearby spacers bistro, and rally some of the pilots there to help the beleaguered Republic troops, and they storm the space port overwhelming the few Stormtroopers there to regain their ships.
The ship weapons force the Rancors back, while the Republic troops scramble aboard, and the ships flee, although one of them has a Rancor hanging from its loading ramp, which is shocked by R2-D2 causing it to fall.
As the ships flee into orbit, the Emperor orders his forces to let them go, as he knows they will retreat to the PInnacle base, which is the first target for his new Galaxy Gun.
Meanwhile on Ganath, the Millennium Falcon is being modified with Ganathian technology to allow it to fly again, it's damaged mandible replaced by a lightning cannon, which will perform more efficiently when powered by the more advanced power systems of the Falcon. The Ganathian King, Empatojayos Brand, joins the crew as they leave the gas cloud, as he wants to help the Jedi, but as they soar out, they are intercepted by Boba Fett in Slave 1. With a quick blast of the Lightning Cannon, Slave 1 loses control and disappears into the gas cloud, although they suspect they'll see him again.
Aboard the Jedi Explorer, Luke is training the two Ysanna recruits, Rayf and Jem, while Rayf's training goes well, Jem lashes out in anger, and when Luke counsels her privately, the two discover a connection as they both have darkness within them, so they embrace and kiss.
The Falcon arrives at New Alderaan, and Han and Leia are reunitied with their twin children, Jana and Jacen.
And the Jedi Explorer arrives at Da Soocha V to land at Pinnacle base, but they detect a massive missile emerge from Hyperspace, and their fire against it is deflected harmlessly by its shields. The missile impacts the moon, activating its Particle Disintegrator that initiates a massive Nucleonic Chain Reaction, which explodes the moon from within, causing Luke and Kam to exclaim that Mon Mothma and the Alliance are dead and finished. . . .

High Points : The blossoming relationship between Jem and Luke could prove to be quite interesting, but since I'm not aware of the character in the expanded universe beyond Dark Empire, I can only think that it's doomed and Jem isn't going to survive to the end of the series. Although I could be wrong.
However the idea of two people, challenged by the Dark Side coming together, recognising the temptations that it triggers in each other, and allowing them to support and love each other is a solid one, and perhaps feels more rewarding than the one he has with Mara-Jade. While Mara-Jade is a cool character, their relationship always seemed just too good to be true.

I'm also continuing to enjoy Empatojayos Brand, his enthusiasm to see the galaxy he's been hiding from, combined with his respect for Vima Da Boda as a Jedi, even though everyone else looks at her just as a crazy hobo lady, is interesting. I'd really be interested in seeing him become part of Lukes Jedi Academy, using his experience to train others, while being underestimated due to his disabilities (basically being a floating head and torso) in a similar manner to Yoda.

Low Points : Well, Dark Empire is back to spending the majority of it's page count on newer and bigger devices of war smashing each other without much characterisation to actually interest or drive the story forwards. We get Vipers vs Rancors, and then a planet smashing Galaxy Gun. It's all Star Wars turned up to 11, and something I personally find very boring.

So what do you really think ? : It's Dark Empire being Dark Empire really, while there's still some of the interesting elements that made the last couple of issues interesting, they're definitely side-lined here, and I imagine will be almost completely absent from the final issue of Dark Empire 2.

Final Words : So one more issue of Dark Empire 2 to go, and I'm feeling at the moment that it peaked in the middle and we'll only get massive explosions and even bigger weapons of war clashing at the end. As there's no sign of the Emperor and Luke/Leia even meeting during this story, and when the villain and hero never even meet, then it's all a bit abstract and uninteresting on a personal level, although I look forward to being completely wrong.