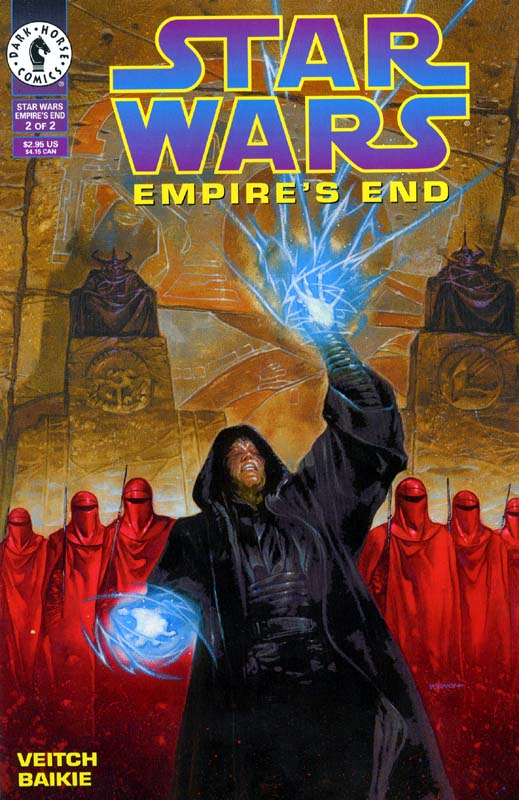 Empires End 2: Rage of the Emperor

What is it ? : Palpatine visits the Valley of the Dark Lords on Korriban, the spirits of the former Dark Lords want to welcome him to their number among the dead, but Palpatine refuses demanding to know where the Skywalker children are. The spirits reveal to him they are approaching Onderon, and he orders his ship to head there immediately.
Han, Leia, Chewbacca and the kids are aboard the Millennium Falcon, and are surprised when the Eclipse 2 grabs them with it's tractor beams, Chewbacca fires the Arakyd missiles destroying the tractor beams and allowing the Falcon to escape to the city of Iziz on Onderon. The ancestors of the people who helped Master Arca some 4,000 years before offer their help, hiding the family, while Chewbacca and Vima-da-Boda leave in the Falcon in an effort to fool the Empire into following them.
This trick works momentarily, until the Emperor reaches out to touch Leia's mind, only to realise that the Light Side presence he detects is instead Vima. But when they reach the Republic communications centre Lando and Luke reveal they have captured a Dungeon Ship and it's force cages, designed to restrain Jedi, which they intend to use against Palpatine now they know where he is.
They lead an attack on the Eclipse II, with Luke heading to the surface where they detect Palpatine has gone, and Lando leading a boarding party onto the colossal vessel.
While Luke is delayed by the same trick they tried to use on Palpatine, as he heads into a shuttle where he detects a Dark Side presence, only to discover it is a Dark Side Adept and not Palpatine. The Emperor arrives at the Beast Riders palace deep in the forests of Onderon where Leia and the Children are hiding. He uses mind tricks to foll the Beast Riders into thinking he is a harmless old traveller. A fight breaks out, with Palpatine weakening himself with every use of the Dark Side, but he blasts Rayf Ysanna with Force Lightning, killing the boy, but putting himself at a disadvantage as Luke arrives.
With one last effort he releases his spirit towards Leia and Han's infant child to take it's body for his own, but Empatojayos Brand grabs the child and puts his own body in the way, absorbing the Emperors spirit into himself, dying consumed by darkness, but taking the Emperor with him.
Luke realises that his efforts to build the Jedi Order are back to just him and Kam, who is aboard the Eclipse with the raiding party, They raiding party with R2-D2, reprogram the Hyperdrive of the Eclipse II, forcing it to jump back to Byss, where it collides with the Galaxy Gun which fires point blank at the massive vessel to try to save itself. As the two superweapons begin to explode, the raiding party scramble to launch the Millennium Falcon from it's position docked with the Eclipses hull. And as they launch and quickly jump to Hyperspace, behind them they watch as Byss itself is consumed in the explosions.

High Points : Well, it's a tidy end to the Dark Empire series, basically tidying up after itself. The Emperor is dead again, the superweapons destroyed, and most of the new characters are killed putting the galaxy pretty much back to where it was before, even destroying the Emperors new throneworld of Byss. There's not loads of Jedi hanging around any more, with Empatojayos Brand and the Ysanna all dead or in unwakable blocks of Carbonite.
But it's all too self contained for me, I've never liked stories where the world only exists for the telling of that single story, and while Star Ward often comes close to doing this (the Empire only exists for the heroes to beat during the movies for example), Dark Empire is the most egregious example of it I can think of in Star Wars.

Oh, but it's nice to see Onderon again, as the series does seem to heavily lean on the Tales of the Jedi series for it's planets (we've had Ossus, and now we've got Korriban and Onderon).

Low Points : Well, as stated above, it's all a little too tidy for me. But apart from that, the destruction of Byss, a planet we've seen contains many innocent people (remember all the smugglers and traders in the cantina watching when Lando raided the world in Dark Empire 2?), who presumably all just die.

And I'm getting a little tired of how easily Tractor Beams are defeated in the post Empire years, Luke comes up with a way of avoiding them in the Thrawn Trilogy, which is pretty much duplicated here. Is this something new, because they didn't use it when they were tractor beamed aboard the Death Star in A New Hope? Is there basically now a space Youtube video they've all seen "With this one trick you'll never be bothered by Tractor Beams again!".

So what do you really think ? : If I've not made it clear, I'm not impressed by Empires End. Dark Empire 2 managed some interesting things when it centred about the characters not the spectacle of Star Wars. The death of Empatojayos Brand verges on being fantastic, with the crippled old Jedi, once forced into hiding by the purges of Palpatine, now sacrificing his life to absorb the Emperors spirit and die along with him. But we get as much time spent on this as we do on Leia and C-3PO recounting the story of Master Arca and Nomi Sunrider (hey remember that thing you liked, well this story is connected to that one), and they don't even attempt to hook Vima-da-Boda into that when she's descended from Nomi.
The Emperor pretending, through subterfuge and Mind Tricks, to be just an old traveller so he can meet the guests in the palace, seems like it could be an interesting bit of character building for Palpatine, but it's dealt with in two frames and most of it explanatory text. There's good ideas in here, but they're thrown away in exchange for big battles and killing off everyone so you'll know that these events are dangerous and important.

Final Words : Well, Dark Empire as a trilogy had some interesting ideas in there, and introduced a whole load of new ships and weapons as it kept the cutting edge of technology moving forwards. But it was all just spectacle with little characterisation or emotion to connect you with the story, which just makes it all a bit disappointing.