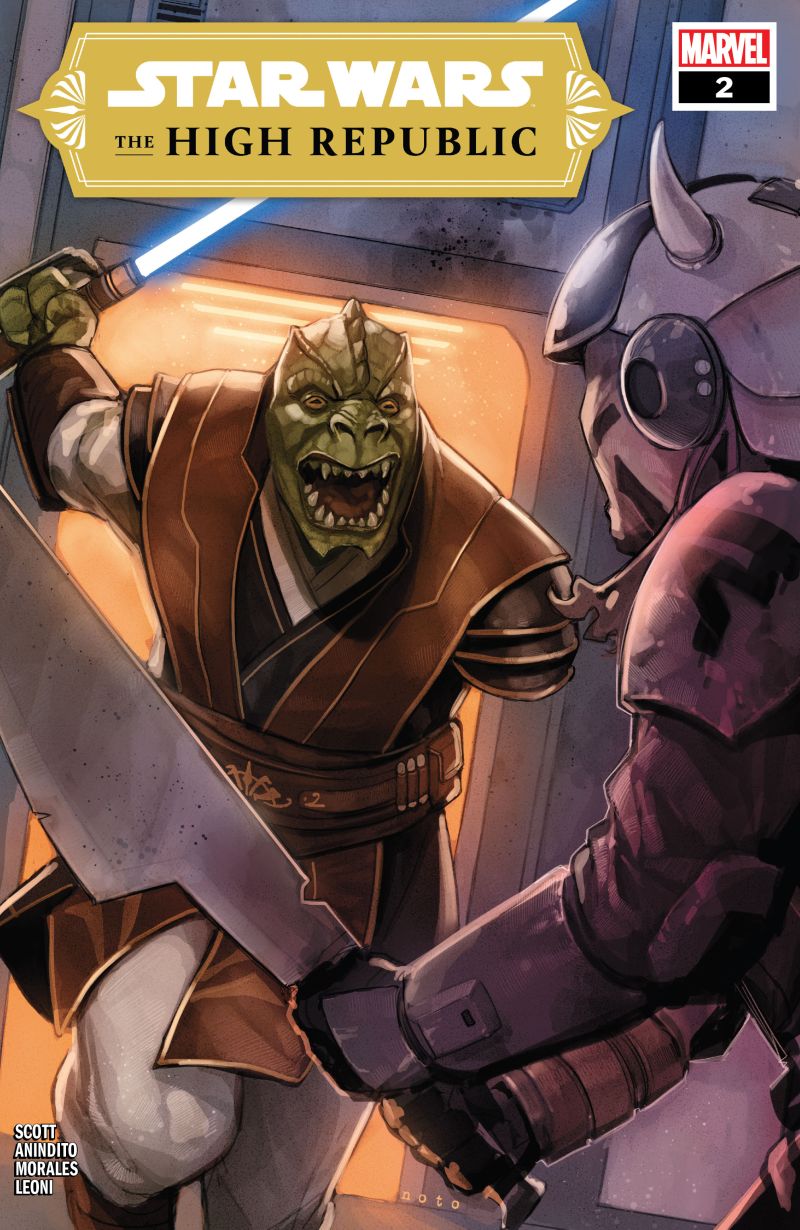 What is it ? : Newly Knighted Jedi Keeve Trennis is piloting a shuttle with Jedi Master, Sskeer, and the Kotabi twins Terec and Ceret, aliens who share the same mind and apparently Jedi prodigies. They have been sent to investigate a distress call, and discover the wreckage of a large transport vessel which has apparently been raided by Nihil raiders.
Part of Nihil tactics are to pump their targets full of a gas which not only poisons the crew, but also blocks sensors, meaning that the Jedi cannot detect whether there are any survivors aboard, so don breath masks and board to search the ship. As they explore the ship, Sskeer begins having flashbacks to the battle where he lost his arm, and Keeve senses that there is something wrong with her old master.
They discover the crew is dead, and was led by a Hutt, also discovering the ship was carrying a type of barley which is key to making Bacta. They are attacked by a lone Nihil who was left behind by his people, and Sskeer lashes out in anger killing the Nihil, and keeps hacking at the body with his lightsaber, until Keeve arrives and Sskeer declares that it was impossible to disarm their attacker.
Contacting the Starlight Beacon and informing them of the Nihil attack, combined with Hutt traders illegally operating within Republic space, Sskeer's disregard for the Nihil is noted and he is reprimanded by Marshall Avar Kriss. They discover from the ships navidroid that it collected it's cargo from a newly started colony world, Sedri Minor, and she tells Sskeer to take Ceret to the world to investigate further while the other two remain until she arrives to salvage the transport ship.
Arriving on Sedri Minor, Sskaar finds that Jedi are not welcome here as the world is independent, but while he debates the leader, Ceret wanders off into the barley fields and we see a large tentacle emerging poised to attack.
Marshal Avar Kriss arrives at the transport ship, and Keeve tells her of what happened with the Nihil, and that she didn't know what to do, Avar apologises, explaining that since Kur Sskeer has not been the same, when they are interrupted by Terec shouting out. Rushing to the twin they are told that something terrible has happened to Ceret. They contact Sskeer immediately, and he realises that Ceret is nowhere to be seen so rushes into the fields only to discover a dropped lightsaber and no sign of the twin. . .

High Points : This is a lot better than the first issue and I'm actually pretty quickly invested in the story, Sskeer suffering trauma from a battle and the loss of his arm is pretty compelling, and I find myself wanting to read more about this Trandoshan Jedi Master, as Keeve is a bit of a passive observer in this issue.
The twins are quite interesting, but it's a fairly standard trope for twins to be able to sense harm to each other, and unless they remain as characters, I'll be pretty annoyed at them just being used for this.

Low Points : While I'll give it credit for trying, the attempts at world building seem a little heavy handed. They drop in a comment about many world still suffering since "the great disaster", and it feels like they're trying to world building like a New Hope did with the comments about the Clone Wars. But in this case it just drops in there like an anvil, as the writers attempt to tell you about the greater setting.

I'm also a little put out by the fact that the Jedi seem more concerned that the Hutts are trading in Republic space (even though it turns out they're trading with a colony which doesn't want to be part of the Republic), even going as far as investigating where the cargo ship collected it's cargo. Rather than actually looking for the people who boarded the transport, pumped it full of poison gas, and then left behind a sniper who attacks the Jedi while they search the ship. Are we back into the Phantom Menace territory here, with Jedi dealing with trade disputes rather than fighting pirates.

At the end of the last issue we witnessed Sskeer returning to his quarters and igniting his lightsaber upon witnessing something. But we get no mention of that here, even though the cover misleads you into believing that this issue will continue directly from that scene. Although, perhaps given what we now know about Sskeer, that was just all in his head.

I'd also be a bit remiss if I didn't mention that the Barley grain they discover aboard the Hutt transport is described as being an ingredient of Bacta, and they explain that Bacta is the new replacement for "Rejuv".
This just adds another link in the chain of super healing drugs, Knights of the Old Republic introduced Kolto, and the main characters involvement in the world of Manaan will probably slow or even cease it's production. We then presumed that Bacta replaced Kolto as the healing drug of the universe, although now it appears that in between was a drug or system known as Rejuv.
Which is all fine, except that the Darth Bane novel Path of Destruction mentions Bacta, and is set 900 years before the High Republic period, which means that Bacta cannot be new. Of course the fact that the Darth Bane novel is now banished to the Legends continuity, means that there isn't actually a conflict here.

So what do you really think ? : I enjoyed this issue a lot more than the first, and having discovered that this was actually the first planned, but the authors decided we needed to see Keeve's origin story.
I'm not a fan of origin stories at the best of times, and definitely think that these comics would have been better served by just jumping straight into the action here, and leaving Keeve's origin as something we could piece together from fragments interwoven into the story.

Final Words : Well, I'm invested, at least for now, so I intend to read the next issue when it comes out and see where it goes from there. Although so far, I don't feel as if the High Republic setting is proving any different from the other eras, with some elements (the Jedi being involved with trade disputes instead of hero business) feeling as if they'd actually fit in better just before Episode 1.