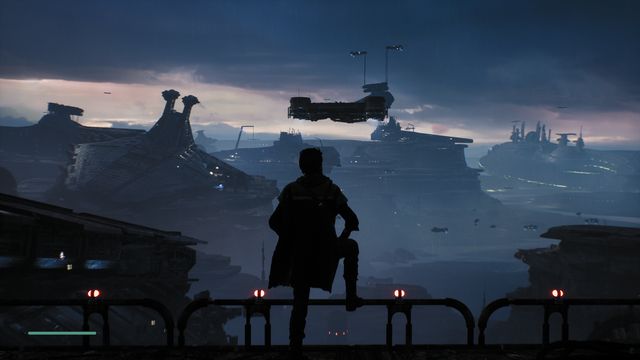 What is it ? : The game begins with you as Cal Kestis, working in the Imperial scrapyard on the world of Bracca. You and your partner Prauf are asked, for a bonus, to investigate the jammed clamps on a salvaged ship, which are holding up work.
The pair begin a journey across the scrapyard, climbing up platforms, sliding down ramps, squeezing through gaps, swinging on ropes across gaps, and balancing on narrow beams as you learn the games controls.
As you reach the clamps and free them, disaster strikes as the two fall towards their certain doom, but Cal uses the force to save the two, which Prauf recognises as the skills of a Jedi. Cal swears Prauf to secrecy and the two board a train and discuss Cal leaving and going into hiding elsewhere.
Cal falls asleep and wakens as the train lurches only to find Prauf missing, searching the train everything seems off, until Cal sees a vision of his Jedi Master, Jaro Tapal, a Lasat Male who offers him a warning.
Cal lurches awake again, this time with Prauf present, who tells him the train has been stopped by the Empire, and everyone is escorted from the train by Stormtroopers. Outside they are lined up and two Inquisitors tell them there is a Jedi among them and ask for a name. Prauf steps forwards saying he knows the truth, but instead of giving up Cal he sacrifices himself to protect his friend, but all to no good as he is discovered regardless.
Cal falls onto a passing train, he fights his way along it, battling Stormtroopers with his lightsaber, and coming under fire from Imperial vessels as they attack blasting parts of the train away. Reaching the front, Cal is confronted by an Inquisitor, the Second Sister, a battle Cal cannot win, but he is rescued by a mysterious ship which he leaps aboard. Cal's rescuers are Cere Junda, a former Jedi, and Greeze Dritus, the pilot of the Mantis, and they'll explain that they need Cal's help to restore the Jedi Order.

High Points : I really like this level, and was actually disappointed that you never return (as you do with many of the locations in the game), it's visually striking, with the views of scrapped Clone Wars ships, Acclamators, Venator Star Destroyers, LAAT/i's, you even see a Lucrehulk vessel arriving overhead, and stop to marvel at an Jedi Interceptor.
The game is beginning among the ruins of the clone wars, piles of Clone Trooper helmets are piled here and there, and the wreckage makes an interesting and understandably hazardous environment to move through (usually games have hazardous environments to move through, platforms to leap across and ropes to swing between, but they make little sense for a functioning vessel or other working or living space, but the scrapyard makes complete sense that there are no safety rails and your character stands a chance of falling to his death at any moment).

The death of Prauf also is excellent, the tension as for a moment you think he might sell you out to the Empire, as it's been made clear that the two of you will do almost anything for money. But then the friendship he's shown you comes to the fore and he dies a tragic, moving, yet utterly pointless death as the Inquisitors discover Cal anyway.

At the end of the level where you fight the Second Sister, I was especially impressed by the way the fight is set up, as it's an impossible, but not ovewhelming fight. As you battle her, there's a moment when you think there's a chance you might be able to win, as you manage to hold your own for a very short while. But it soon becomes apparent that this is a fight you won't win, and the rescue at the end is welcome. But the balance of this fight is to be commended, as it's not so difficult to be absolutely hopeless, and the idea that before the end of the game Cal will be able to challenge and defeat the Second Sister is not so far fetched.

Low Points : There's not a lot to hate here, it's a training level, so is pretty straightforwards with a lot of very basic challenges. But there's some spectacular views, some excellent action scenes, a lot of great world building, as you go through the process of climbing platforms, negotiating thin beams, and swinging over chasms for the first time.

So what do you really think ? : I love this first level of the game, and would have loved to explore Bracca more, and when a game leaves you satisfied but wanting more, it's definitely doing something right.

Final Words : While Bracca is a very linear level, with none of the exploration which the later parts of the game feature so heavily, it is basically just the training level, so that can be forgiven.