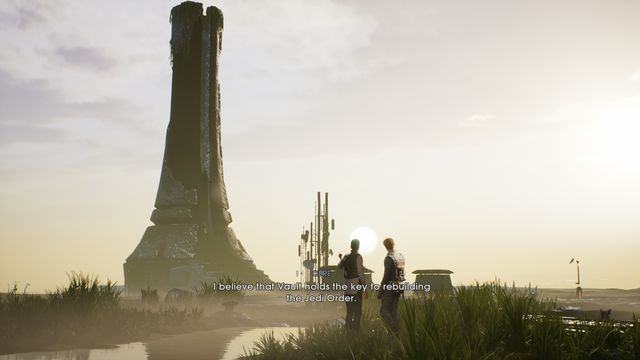 What is it ? : Aboard the Stinger Mantis, Cal meets it's crew, the former Jedi Cere Junda and it's Captain the diminutive Latero, Greez Dritus. As you explore the ship and find various things to interact with, Cere talks with you about Cal's power to feel the echos of past events through the force, witnessing what once occurred to an item or place.
The ship arrives at the world of Bogano, and Cere tells you that this world is unknown and doesn't appear on any maps, and she points out a distant building which she tells you contains the secret to rebuilding the Jedi order, but needs a Jedi to access, which she is not.
Cal explores, and inside an abandoned dwelling built inside a cave, he encounters a droid, BD-1 being attacked by one of the creatures which inhabit this world. Rescuing the droid, Cal befriends it by helping repair the damage done to the droids leg. As he continues to explore, now with BD-1 perched on his shoulder, Cal encounters an area he can only access through wall running, and has a flashback to when he was a Padawan and his Master taught him the technique, allowing him to now wall run and access many areas he couldn't before.
He eventually reaches the building that Cere had pointed out to him, and he accesses the vaults beneath, where BD-1 replays a recording of it's old owner, Cere's master Eno Cordova. The recording tells Cal that there are many encrypted recordings within BD-1 which will play when certain visual stimulous is received, so will only show when BD-1 is taken to certain places.
Cordova tells him that he has concealed a Holocron holding the locations of all Force Sensitive children across the galaxy, and it can only be accessed by learning the secrets of the Zeffo who built this place.
Returning to the ship, Cal reveals the details of what he has learned to Cere and Greez, demonstrating the use of a Holocron to Greez, which displays part of the recording Obi-Wan Kenobi sent out warning that the Jedi Order had fallen. Cere reveals that she no longer feels the force due to something she experienced, and she cut herself off from it.
And the new companions must now make the decision to visit Dathomir, identified by BD-1 scanning some wall art on Bogano, or Zeffo as Cordano mentioned. . . .

High Points : The game really introduces it's semi open world, exploration based game style here, as the entire map is open to you, however Cal just isn't capable of visiting many parts of it yet, demonstrated early on by sections you need to be able to wall run to reach, which you can return to as soon as you've picked up that power (and of course sections where you need BD-1 to access Zip lines to access).
This makes the levels feel very large, although where you can visit is at this time constrained by your abilities, but does feel extremely conventional, as you open new areas, which actives new enemies, which you clear and move on.

Low Points : While the locked areas makes the game feel large and expansive, it does mean you'll be revisiting the same areas over and over again, returning when you can unlock this area or that, and open this lockbox or container.

And for the size of the map, it feels very empty, with only a few monsters to fight, and one place which seems to have been inhabited recently, with the Zeffo ruins themselves sparse and mainly ancient remnants. For it having the vaults, and the tower which Cere points out to you when you land, there's few other signs that the Zeffo lived here, no signs of habitations or a town or city around this supposedly relevant building.

So what do you really think ? : After really enjoying the first level, Bogano felt pretty boring in comparison, the spectacular views of the first part of Bracca aren't present here, with the surface of the world being flat and lost into view limiting mist, and the action of the second part of Bracca just isn't present here at all.
There just seemed to be so many areas where I became aware of the "game" in the game, thinking to myself, oh well, I'll need to remember to come back here when I get the ability to get past this obstacle. These barriers being obviously unnatural ones put there to stop my progress until later.


Final Words : This is where I questioned whether I was going to enjoy Fallen Order, after having fun at the start, I began to wonder as a wandered around Bogano whether I could be bothered to put in the time to come back here again and again to access everywhere. But fortunately the level didn't overstay it's welcome, and I moved on, returning here only once more (and then because the plot required it) rather than everytime I gained access to a new power which would allow me to explore further.