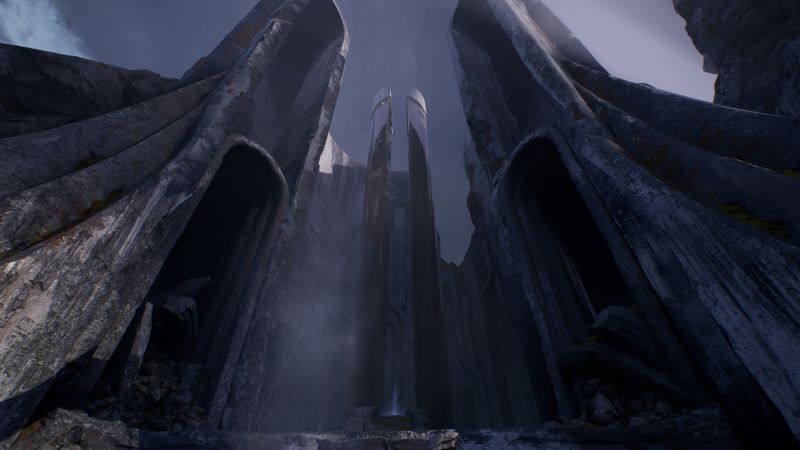 Chapter 2: Zeffo and the Tomb of Eilram

What is it ? : Arriving at the homeworld of the Zeffo, they see that there is a massive storm and Greez Dritus has to pilot the Stinger Mantis down through it. As they land they notice that the Empire has already landed here, and Cal sets off from the landing pad and through an abandoned Zeffo village and into a cave where he uses his lightsaber for illumination.
The path onwards involves leaping onto the blades of large wind turbines, and Cal uses the force to slow the blades allowing him to jump onto them, run the length before they begin moving again. Further along Cal encounters a slope which he slides down, having to time his cornering and jumping as he speeds down it. Eventually Cal reaches the Tomb of Eilram, where he must unlock various puzzles involving large balls which must be put into holes, this is done through a combination of Force Push, and controlling Zeffo devices which create wind.
However, Cal doesn't learn Force Push until he defeats a Tomb Guardian, a large Zeffo automaton which is a dangerous opponent. Once Cal has Force Push however, not only can he return to some of the Puzzles he has had to bypass, but he can also push through damaged walls opening new areas both on Zeffo and other worlds he may have visited.
BD-1 replays another recording of Eno Cordova, who gives you your next destination, Kashyyyk where you must meet the Wookiee chieftain Tarfful. After defeating another Tomb Guardian and solving some more puzzles, Cal returns to the Stinger Mantis, but discovers a repair station where he upgrades BD-1's ScompLink, which allows him to unlock storage boxes and doors which he previous could not (opening more areas which you may have been forced to ignore).
Fighting some Stormtroopers he meets on the way back, Cal discovers that the Mantis is under attack by an AT-ST, and he is forced to fight it, hacking at it's legs with his lightsaber until it collapses.
Cal boards the Mantis, and the heroes still have two possible new destinations, Dathomir, which was mentioned on a wall mural back on Bogano, or Kashyyyk which Eno Cordova has directed you to. . . .

High Points : The nature of the game really becomes apparent here, with this level being massive and sprawling, giving the player a real feel that there's a world out there to be explored, even if the truth is that there's not really much choice in where to go as the level is pretty linear.

The use of force powers also feels incredibly innovative, even if they are actually pretty limited, with Cal slowing turbine blades to leap across chasms, and later smashing through walls into new areas.

And while my compliments here may seem backhanded, they're not intended to be, the game is what it is, but manages to sell you a feeling of freedom of choice and that you're being creative and skilled, almost as if you're cheating by using your force powers and giving you a sense of power over your environment. It's very skilfully done.

Low Points : The game introduces large slippery slopes into the levels on Zeffo, and these cause Cal to slide down through a series of turns and timed leaps. Later on in the game these will continue and get trickier, as you must jump from a slide over chasms, onto vines, and then swing onto more slopes. But even here they become a feature and one I don't like at all. This isn't much more than a quick time event, where you must jab the jump button at the right time. Too early and you fall short into the chasm, too late and you just fall into the chasm, only to return to the top of the slope and have to try again and again until your timing is perfect.
Quick time events have long been a way of showing drama and action outside the normal play of a game, but also been long hated as they don't require skill, just timing or pattern recognition. And the slopes in Fallen Order are just that, hold left for just long enough, hold right to slide round that curve, then jab jump to leap to safety. They're annoying, they break up play, and while looking pretty cool, they don't contribute much to the game.

So what do you really think ? : While massive and sprawling, I really began to feel a little swamped by the game here, as Zeffo just goes on and on, and I really wanted to move on and explore other parts of the game. What's here is fun, but just a bit too long, especially after I got the information to visit Kashyyyk, as there didn't just seem to be a journey back to the Mantis, but a lot more level to get through first.

Final Words : So while Dathomir was an option I received back on Bogano, there didn't actually seem much reason to go there to me as it wasn't on the trail of clues that Cordova had left me in my quest, just something I'd noticed on a mural. So I avoided going to Dathomir and chose Zeffo instead, and now at this point, Dathomir still seemed kind of pointless, so I set off for Kashyyyk as it seemed far more relevant to my quest, but don't worry I'll get there eventually.