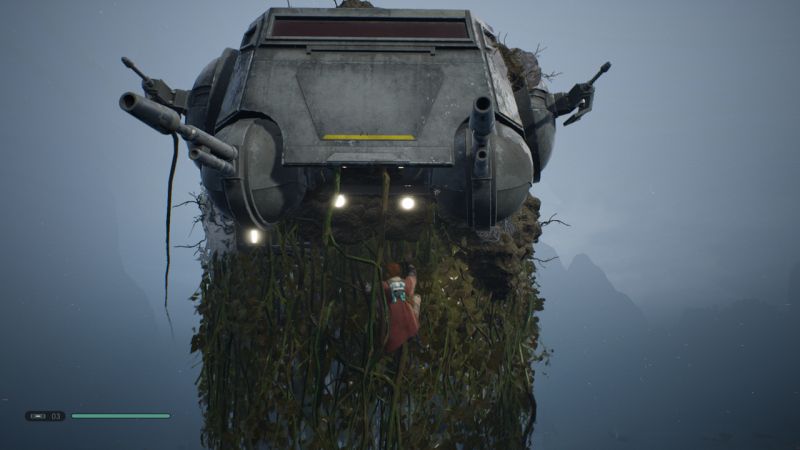 What is it ? : The Stinger Mantis arrives at Kashyyyk, only to discover the world surrounded by an Imperial Blockade of Star Destroyers, and Cere disguises the vessels transponder signal to make it look like an Imperial Transport.
As they descend into the atmosphere in the mountainous region of the planet, Cal notices a giant tree towering over all others, but his attention is broken when a Tie Interceptor skirmishing with a LAAT/i shakes the vessel with their gunfire, and Cal identifies that the Wookiees along with some offworlders are battling the Empire, with the ships sensors picking up that AT-AT walkers are closing on the rebelling positions.
Cal leaps from the ship landing in the swamp below and spots an AT-AT nearby, covered with vines and foliage as it moves towards it's enemy. Catching up with the massive vehicle, Cal climbs up the vines on it's legs, and around the body until he reaches a hatch he can enter the vehicle by. He defeats the occupants and seizes control of the vehicle, joining in with battle using it's weapons.
As he approaches, a figure lands on the outside of the cockpit, and Saw Gerrera recognises that Cal isn't Imperial, and guides his efforts in helping the Wookiees and offworlders against the Empire, until the AT-AT becomes disabled and they clear a landing area where the Stinger Mantis can land.
Speaking with Saw, Cal is told that they don't know Tarrful's exact location, but the best chance of locating him is to join with them as Tarrful is likely to be where the action is. Moving forwards towards the battle, and towards the Giant Tree he earlier spotted, Cal finds a new upgrade for BD-1, which allows him to overcharge machinery and power it up for use.
He soon enters an Imperial Refinery, and helps liberate it and free some Wookiee captives, but once the battle is over and Cal meets a Wookiee called Choyyssyk , who tells him that while they can contacts Tarrful, it will take some time. So Cal backtracks to the Mantis Stinger where Cere tells him news that the Empire has located another Tomb and they can't waste any time. So once again Dathomir gets ignored as an option, and Cal heads back to Zeffo. . . .


High Points : While much of the level is just more of the same, the introduction element to this level is epic, not only do we get a great cutscene as the heroes sneak the Stinger Mantis past a Star Destroyer blockade, but we Cal piloting an AT-AT in a battle on Kashyyyk. We're at maximum Star Wars here.
And the way that Cal lands in the swamp, and they scrambles up the moving AT-AT as it takes part in battle is amazing, fighters swooping down and strafing the walker as Cal precariously clambers up the foliage clinging to its hull. It's a memorable scene, which really feels epic enough for Star Wars, and then Saw Gerrera arrives, clinging to the outside of the Walker in much the same way as Cal did before he took control, and he directs Cal's fire to maximum effect.
A fantastic introduction for him into the game.

Low Points : But after an amazing opening sequence of cutscene and action packed gameplay, the game settles down into it's standard play, and apart from a couple of times you are liberating Wookiees from captivity, the game doesn't make you feel as if you're taking part in some epic Star Wars battle, it just feels like you're jumping on platforms, swinging from cables and unlocking doors, much as the rest of the game. And while it's fun, it does seem like a massive come down from the way the level starts.

So what do you really think ? : While I enjoyed the level, it's mainly memorable for it's first 10 or so minutes, after which I have difficulty remembering whether there was anything else except the usual gameplay.

Final Words : I perhaps shouldn't be so critical of the level because it starts off so well, but it does feel as if as soon as the Stinger Mantis lands, we're just back into standard Fallen Order gameplay. But before that, it feels epic, and it does make that section feel somewhat stuck in, as if they'd had a great idea and just inserted it into the game, rather than it flowing into the gameplay naturally.