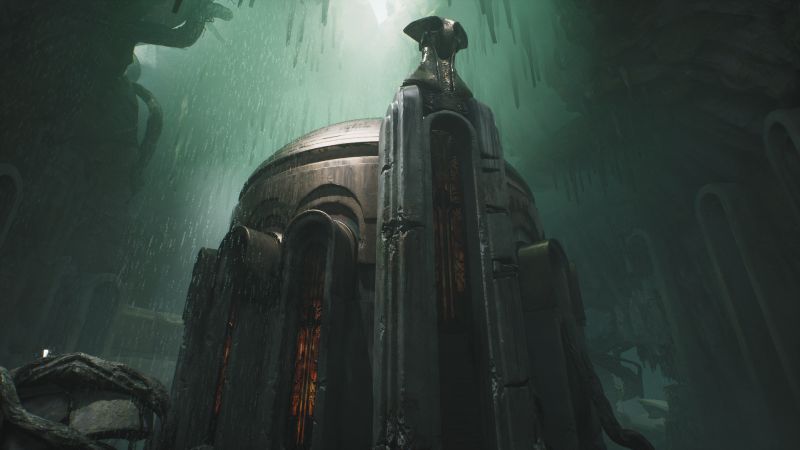 Chapter 3: Zeffo and the Tomb of Miktrull

What is it ? : Returning to Zeffo aboard the Stinger Mantis, and exploring further he discovers the crash site of a Venator Class Star Destroyer, past this he finds the Imperial Excavations site. Upgrading BD-1 again, who can now power up zip-lines as well as down them.
As he explores further Cal encounters the Second Sister, and is forced to fight her once again this time in a more balanced fight but one Cal is only saved from when BD-1 activates a force shield between the two opponents. The Second Sister reveals her identity as Cere's Padawan, Trilla, who Cere gave away the location of to the Empire when Cere was tortured. She tells Cal that when Cere witnessed what they had done to her, Cere used the Dark Side, and asks Cal whether that is who he wants at his side when he gets the holocron, asking him what his old master would say.
Just a little further on he encounters the next hologram of Eno Cordova that BD-1 plays for him, and continues further into the tomb. Fighting his way past Stormtroopers and local wildlife as well as Zeffo Tomb Guardians, Cal eventually finds himself atop a massive slab of stone suspended by four chains where he battles opponents leaping from an Imperial LAAT/le patrol gunship, but it opens fire severing one of the cables and causing the stone to drop from beneath Cal.
He loses his grip on his lightsaber, and as he falls he remembers his training once more, on how to pull objects towards him.
He grabs his lightsaber, and landing on a platform, he can now pull vines and cables towards him, allowing him to reach previously unreachable areas. He swings back to the stone platform, now suspended vertically, and scales it's length.
Solving more puzzles in the Zeffo tomb, this time involving energy balls he uses to burn away vines to access areas, he can now swings across chasms and wall run, both of which are used in combinations to reach certain areas.
Discovering another recording of Cordova, Cal discovers that to access the Holocron back on Bogano, he'll need a Zeffo Astrium, if any still exist.
As he completes the tomb, Trilla contacts him, letting him know that he has raised the tomb, which was exactly what she needed, but after he upgrades BD-1 again (this time to control Probe Droids), and it journeying back to the Stinger Mantis, Cal encounters a bounty hunter, who stuns him unconscious and everything fades to black . . . .

High Points : While much of the level is just a repeat of the standard parts of the game, swinging across chasms, blasting through walls, wall running, etc. The fight atop the stone slab is memorable, as Cal seems victorious, only for the Empire to change the rules and attack the terrain itself dropping Cal into a chasm. As he plummets he remembers how to pull things towards himself using the force, before time resumes and he saves his own life (and lightsaber).

The revelation about The Second Sister being Trilla, Cere's Padawan, who Cere betrayed under torture is interesting enough, although isn't the "I am your father" moment the game seems to think it is. We already know the Inquisitors are ex-Jedi turned to the Dark Side by Palpatine and Vader, and the fact that one has a close relationship to one of the heroes isn't exactly a surprise.

Low Points : While it's fun enough exploring the tomb, and the caverns that form it are large and impressive, they're not exactly remarkable, and it all becomes a little samey as you move between one cavern and another, making heavy use of the in game map, as everything kind of looks the same.

And the game play is getting equally samey, as even the new power we learn this level only allows us to pull vines and cables from out of reach to swing on, when we've been swinging since the first level, so it doesn't really add anything new.

So what do you really think ? : The way that the Jedi powers are beginning to flow together are part of what makes Fallen Order interesting to play, as it is becoming more than just platforming, more into a balletic version of Parkour. As Cal swings from a vine, getting the angle right so he lands on a wall to run along using his wall running power, springs from the end of that onto another wall, and as he leaps into what seems like open space he pulls a vine into his hands and swings to a ledge.
The flow of this looks great, and feels like you're some kind of expert, something I can think of occurring in only a few games I've ever played.

Final Words : So we've been told that Cere will betray us, and then we've been captured in an ambush, I wonder if the two events could be connected. We'll find out in the next part . . .