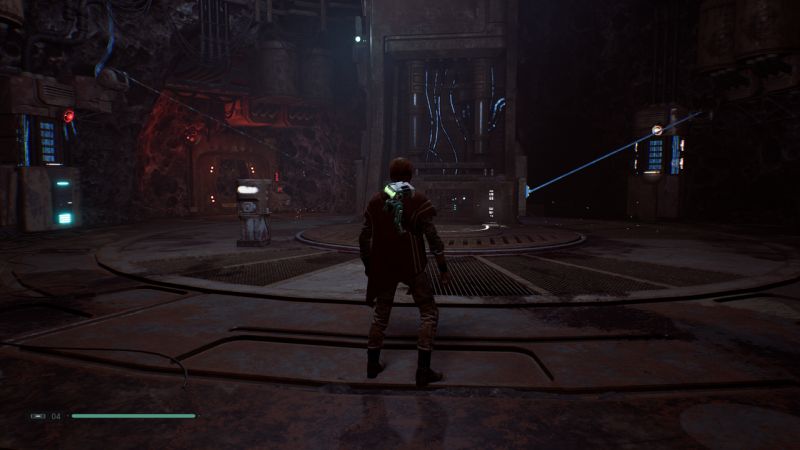 What is it ? : Cal awakens in a jail cell without his lightsaber and without BD-1, but the force is still with him, which allows him to rip panels from the walls gaining access to the machinery behind, and he connects a power cable opening the doors to the rest of the facility. He sneaks through the facility, which appears to be an old mining facility cut out of the rock of an asteroid solving various powerline puzzles, until he finds BD-1 and rescues him.
As they explore they see remains falling from above, and other disabled droids, activating a lift which takes them up into an arena where Cal has his lightsaber returned. A hologram appears which informs Cal that the captain of the Stinger Mantis,Greez Dritus , has sold him out and he must fight various beasts in the arena as watchers bet on a Jedi, one of the fallen heroes of the Republic against these opponents.
He must battle all of the creatures from the world he has visited until they eventually put a bounty hunter into the arena with him. When he defeats them, the Mantis enters the arena from a force field into space, and Cal boards it to confront Greez about his betrayal and Cere about Trilla.
However before much can be said, an encrypted message from Kashyyyk arrives telling Cal that they've found Tarrful and he's willing to speak to Cal, however the Empire overran their positions and the Rebels are hiding out in the forest with the Wookiees, and Saw has retreated offworld.
And as the ship heads to Kashyyyk, Greez speaks to a resting Cal, apologising for putting him in danger and asking him to cut Cere some slack, and Cal reluctantly agrees as the mission is more important.


High Points : It's a short level, and depriving Cal of BD-1 and his lightsaber for a while is interesting enough, making it all about the puzzles instead of the fighting.

And not unique to this level, but something I've not mentioned before. In modern games, a method that the authors have created to allow the game engine to load a new area without a loading screen is by putting a slender gap between areas. So the hero must clamber through, as the game dumps the data for the old area and loads the new one. Now Fallen Order does this, but it's one of the more seemless versions I've seen, as it's not just Cal turning on his side to slowly edge through the gap. These are gaps filled with rocky outcroppings, pipes and other obstructions, so Cal has to hop over pipes, duck under obstructions, and even clamber though different levels.
It really makes what is basically just a glorified loading screen into part of Cals adventure, as he agilely twists through these, even though all the player is doing is pressing forwards.

Low Points : The level doesn't make a lot of sense, as all the creatures you face in the arena are from other worlds in the game, and why would these gamblers / mercenaries only gather creatures from Zeffo, Bogano, Kashyyyk and Dathomir? given the massive amount of monsters available across the Star Wars universe. It feels as if they're just using the assets the authors had created for the game anyway, similar to the way a TV show will often just use the costumes they've used before.

I've also got to question the speed that Cal gets over his distrust of Greez and Cere? The game does a great job of putting Cal in a situation where he believes his mission is important, but one of his companions betrayed their own Padawan, and the other betrayed Cal himself. Now, while Cal himself will be shown to believe himself to be as flawed as them, that doesn't forgive that the game basically just forgets about this tension. There's no real moments later on where you might believe that your companions are going to do the same again, they're trustworthy and steadfast for the rest of the game.
While a redemption arc is wonderful, they just ignore all the tension that they've successfully built into the story, wasting it.

So what do you really think ? : A simple but quite fun level, which did kind of throw me at one point, as I didn't realise that the power cables as well as being used to power devices, could be used to swing across chasms. Which led to me being stuck for a while as I couldn't see a method of progressing until I looked up an online guide.

Final Words : So once again, we're ignoring Dathomir, and heading back to one of the worlds we've been to before, Kashyyyk. The basic game premise of learning new abilities which open up access to areas in levels you've already played through is sound enough, and definitely extends play time. However this extra play time is just you trekking through areas you've completed, to find that cable you needed to learn the force to pull across, or the door BD-1 can now open. And these areas remain cleared so there's no challenge to passing through them, instead of creatures or Stormtroopers returning once you move on, just lots of running around empty areas you've already completed.