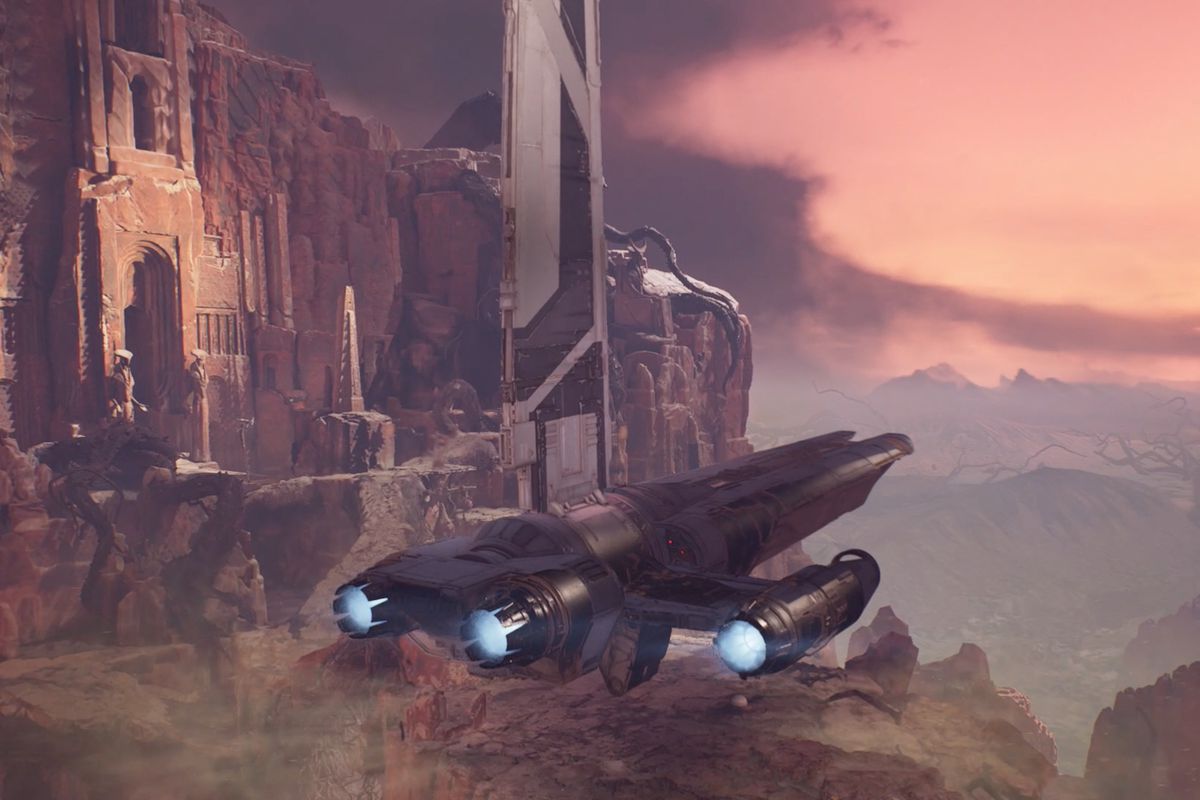 What is it ? : Cal finally arrives on Dathomir, and exploring up into some ruins on a cliff face he is confronted by a Nightsister Witch who blames him for the slaughter of her people because he wields a lightsaber, as did the person that did this. She animates the bodies of her sisters, and these zombies, along with the remaining Nightbrothers attack Cal as he continues exploring the planet.
As he goes further, he discovers an upgrade bench, one which upgrades his lightsaber into a double ended lightsaber, as once it was when it belonged to Cal's master, Jaro Tapal.
Discovering the Nightbrother Village, Cal travels past it and into a swamp, before he eventually encounters a giant bat-like creature, Gorgara, the Chirodactyl, which cannot be defeated yet, only driven away when it is down to around 25% health. Cal searches the body of a nearby Nightbrother, finding climbing claws, which allow him to climb surfaces he once could not.
As he moves on further, he is attacked by Gorgara once more, as it swoops down and picks him up. Using his lightsaber he causes it to drop him, and it begins a sequence where he plummets down, landing on the creatures back as it flies along, continuing the fight before it manages to dislodge him, again and again, until he causes it to crash killing it outright.
Discovering Kujet's tomb he meets a cloaked figure, the Wanderer, who claims to be here to study things. Cal inquires about the Nightsister, and the wanderer tells him that she was only a child when the war came to Dathomir, and that she and her Nightbrother kin were seduced by the power within the tomb. Entering the entrance hall of the tomb, Cal has another flashback, to the day he was being tested as a Jedi Knight, he is urged on by Clone Troopers who man the Venator Star Destroyer they are aboard, before taking part in tests to complete his training under Master Tapal. When he succeeds and Tapal congratulates him, we see the Clone Troopers who were friendly moments ago receiving the fateful Order 66 transmission from Palpatine. The Clone Troopers turn on Tapal and Cal, but Tapal defends the pair with his lightsaber, and the two make their way through the ship trying to reach the escape pods.
As they do, and Cal works to override the locks that have been placed on the pods, Tapal defends them, but as the pods unlock, he goes down in a hail of fire, before Cal slows time allowing the pair to enter the escape pod, after being hit on the cheek by a blaster bolt, leaving him with the scar he displays in the current time. As Tapal breathes his last, he gives Cal his damaged lightsaber, which was once double bladed, but now only works as a normal lightsaber after being hit by the Clone Trooper blaster fire, and he tells Cal to trust in the Force.
As he comes out of the flashback he is confronted by an illusion of his old master, who Cal believes died because of his actions, and finds himself unable to defend himself properly against this man he wished he could have saved. He retreats from the battle, but not before breaking his lightsaber, and leaves defeated.
Outside he encounters the Wanderer again, who reveals that he is Taron Malicos, a former Jedi, shrugging off his cloak he reveals he has marked his body with symbols from the tomb, and he tries to recruit Cal, claiming that he has managed to conquer the darkness on Dathomir. Cal realises that Taron has turned to the Dark Side, wearing decorations made from the horns of Nightbrothers, but the Nightsister appears, revealing that Malicos lied to her, claiming the Jedi perpetrated the massacre of her people, a lie she now sees through, unleashing the zombies of her slain kinfolk against Cal and Taron.
Unarmed, Cal flees back to the Mantis, seeing himself as a failure. As the ship takes off, Cere tells him how she when she saw Trilla had been hurt and turned, and turned temporarily to the Dark Side. Telling him how even though she cut herself off from the force to stop it happening again, she discovered the Holocron and a way of redeeming herself, and how he needs to find a way of carrying on. . .

High Points : While the action scene of fighting the Chirodactyl, Gorgara is amazing, as Cal is hurled from it's back when it has taken him high into the sky, and he must land on the creature to strike it on multiple occasions. The real meat of the level is in the characters, Taron Malicos, and Merrin, the Nightsister.
While she acts as your opponent for much of the level, you discover her motivations and they are understandable, she is defending what is left of her home against the same intruders which once laid waste to it, Lightsaber wielding Jedi. It's clear that you're not really her enemy, but the danger she faces you with leaves you no choice but to fight the opponents she pits against you, making you look exactly like the aggressor she thinks you are.
Malicos has fled to Dathomir, seeking power to confront the Sith with, fleeing Order 66, and falling to hopelessness and the Dark Side in his quest for power. While he is not a galactic conqueror like Vader or Palpatine, he is just as surely evil, wearing the horns of Dathomirian Zabrak Nightbrothers as trophies, and seeking to turn Cal and gain access to the power within the tomb.
But we shall face them both again later, when no doubt I'll have more to say.

I also have to throw massive complements at the Order 66 sequence of the game, as we finish Cals training, but then are thrown straight into the Jedi purges, as we witness the once friendly Clone Troopers receive the hologrammatic communication from Palpatine and turn on the Jedi. The entire scene is amazingly done, and from the moment where we see the hologram of Palpatine, and know exactly what is happening literally behind the back of our Master, unable to do anything about it. To being hunted down by the Clone Troopers through the corridors of the Star Destroyer, when only moments ago they were treating you as a friend and comrade. An amazing scene, and fantastic addition to the game, finishing the flashbacks in the game with one that not only explains how Cal survived the purges, but also how he received the scar on his cheek and his broken lightsaber.

Low Points : I'm not a fan of how they've treated Cal's guilt over the death of his Master, Jaro Tapal. Cal feels responsible for the death of the Jedi Master at the hands of the Clone Troopers during Order 66. Cal is obviously not much more than a child, and apparently feels guilty that he could not defend a Jedi Master from hordes of Clone Troopers.
This guilt apparently matches that of Cere, who gave out the location of her Padawan, leading to her being turned to the Dark Side and into an Inquisitor, and Greez's, guilt over selling Cal out over a gambling debt.
While I totally get that Cal would have wanted to do something about the death of Jaro Tapal, I would have thought that he would have understood that there was nothing he could do. The level of guilt that Cal feels isn't justified, as all he is guilty of is being young, where the others objectively did something bad, even if the circumstances were difficult.
I think that the impact would have been greater if Cal had actually done something which had led to his masters death, some mistake which had caused Tapal to be killed, freezing under fire causing Tapal to step in the way, or failing at something which led to a delay where Tapal is killed. But Cal does everything right, and still feels guilt, which I can understand, but his sin doesn't match those of his comrades, and part of the message the game is trying to get over is that they are all flawed, but still heroes.

So what do you really think ? : There's a lot to like in this level, even if it's not perfect, and with two great new characters being introduced, and the Order 66 scene, this is definitely the high point of the game for me, as I found myself watching the scenes with Malicos and Order 66 over a few times and really loving them again and again.

Final Words : So onto Ilum, as Cal must rebuilt his lightsaber, and we must move on towards the end of the game, obtaining the Astrium and gaining access to the Holocron.