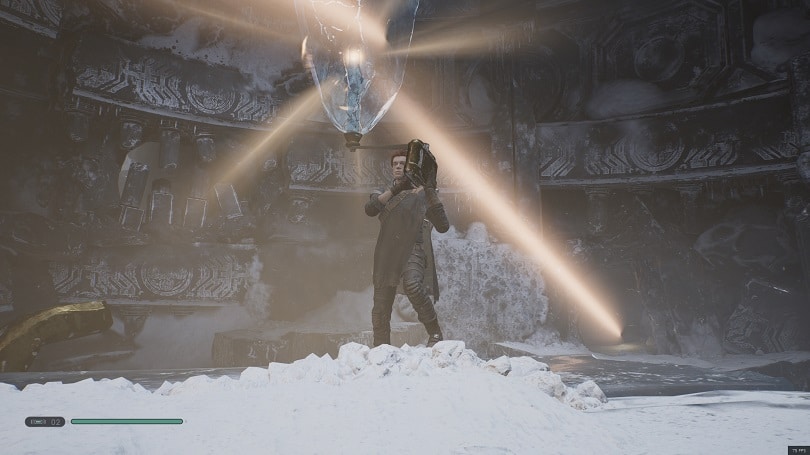 Chapter 5: Ilum and the Jedi Temple

What is it ? : Arriving on Ilum, Cal must make his way through a snowstorm to locate the Jedi Temple to retrieve a Kyber Crystal to repair his lightsaber, he quickly locates it and squeezes in through a crack. Inside he finds the temple frozen and in darkness, and opens the shutters on a window illuminating the inside, and also creating a beam of sunshine which shines across the chamber.
Cal uses various cables to manipulate a giant crystal hanging from the ceiling of the chamber, causing it to catch the beam of sunlight, and melt ice where he projects that beam eventually opening up the door leading on further. Inside he finds a crystal, but it cracks in half, causing BD-1 to replay another recording of Cordova where he talks of the doom of the Jedi Order and tells Cal that failure is a necessary part of the path he has set. This leads Cal to takes advantage of this broken crystal to built a split saber, one that can be fixed together to use as a double blades saber, or split in two to use as two separate sabers.
He soon discovers that Stormtroopers are here, and fights his way through them back to the Mantis, but just before he reaches the ship he is confronted by two AT-ST's, which turn out to not be as much of a problem given all of the abilities Cal has learned since he last confronted one.
Taking down the two Scout Walkers, Cal heads back to the Mantis and they take off to return to Dathomir. . . .

High Points : A short level here, basically just filling in how Cal repairs his lightsaber, however the level does manage a quite entertaining puzzle, where Cal must manipulate a beam of light by swinging around a chamber, and pulling a large crystal around to direct the beam.
However this puzzle is over all too soon, as I thought it was going to involve channeling the beam further and further into the temple, melting the ice, but in reality it is just the first chamber which contains this puzzle and it is over as soon as you progress any further.

Low Points : The brevity of this level stops there being anything particularly annoying, but the sudden addition of Stormtroopers, and then the two AT-ST's feels like an afterthought, as if the developers realised there needed to be a combat challenge here after you got your lightsaber back, which meant that any native lifeforms were out of the story as they might have attacked before.

So what do you really think ? : Apart from the cutscenes where we see Cordova's last recording to BD-1, telling him to be brave as he encrypts and mindwipes the droid, the level is brief and mainly just exists for storytelling reasons, with no real challenge from the Stormtroopers and the only puzzle being east to solve. But we do get a third style of fighting from Cal, with single bladed, double bladed and now split sabers, now all an option, and he can swap between them in combat.

Final Words : A brief, but not unpleasant level, and Cal's off back to Dathomir to confront the Nightsister Merrin, the Fallen Jedi Taron Malicos and his own fears of failure by confronting the image of his Jedi Master Jaro Tapal once more.