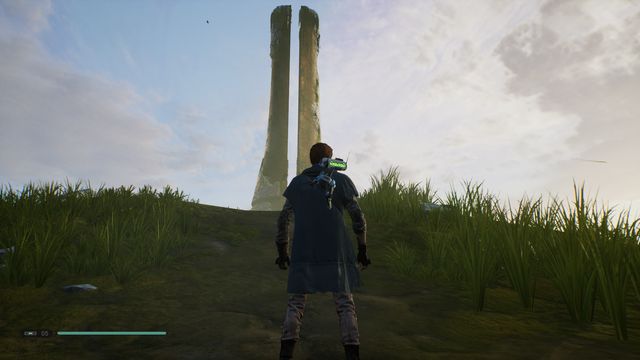 Chapter 5: Bogano and the Vault

What is it ? : Returning to Bogano, Cal makes his way to the vault Astrium in hand, making only slight detours to explore the areas that his relearned abilities and upgrades to BD-1 now allow him access to.
The Astrium allows him access to a mirror, and touching it Cal has some visions, records of the Zeffo civilisation, and how it fell due to blindness and corruption. He also witnesses visions of himself training the Jedi children he is about to locate with the Holocron, and then Stormtroopers attacking and trying to capture the children. He sees Trilla asking for his surrender, and the captured children being jailed and tortured as once Cere was. He sees himself clad as an Inquisitor, before the visions end and the Holocron is revealed to him.
However, the Second Sister / Trilla enters the room before he can take it, and the two fight, but Cal is more powerful and defeats her, knocking the lightsaber from her hand. Cal grabs it, but his ability to see memories works against him, as he is paralysed as he witnesses Trilla being abandoned by Cere, her torture and acceptance of being an Inquisitor before Cere, and Cere lashing out in anger with the Dark Side.
When he recovers, Trilla is gone, as is the Holocron, her taking advantage of his paralysation and vision, to take it. Returning to the surface, he finds Bogano now populated by Stormtroopers and he fights his way back to the Mantis.
Back aboard, he tells Cere what happened, and she takes up Trilla's lightsaber and her role as a Jedi Master, revealing that Trilla will have returned to Nur and the Fortress Inquisitorius where the Inquisitors are trained. . . .


High Points : It's nice to see Cal witness what we all know would happen if he gets the Jedi Children, as we're aware there's no Jedi around at the time of the Empire. So his visions of the kids getting found and captured should make him reconsider using the Holocron if he is to find it.
But in general the visions are quite nice, although those of the Zeffo are a bit obtuse, and don't clearly lay out the fall of the Zeffo, just vague hints of their blindness to their mistakes and corruption from within, but nothing as clear as that we witnessed back in Knights of the Old Republic about the Rakatan Empire, where was saw it was their manipulation of the Force and the Dark Side which led to their fall.

I also liked the way it turned Cal's postcognition against him, where as so far he's been able to witness history and events by touching things, which has been a handy way for us to find out what happened in a place. This time, while he is stuck witnessing the visions that come upon him when he touches Trilla's Lightsaber, she deftly takes the Holocron and leaves before he finishes and recovers. Her comments about the Lightsaber having been through hell seems a little off though, as it's her he experiences visions of, and virtually none of it the Lightsaber was present for, unless while Cere's Padawan, she had an inquisitors spinning Lightsaber.

Low Points : I know Fallen Order isn't an RPG, but the core of this level is on rails, as you've no choices within the visions of the Zeffo, of the Jedi Children, and during the visions of Trilla. There's some nice storytelling going on, but you're a witness to these events rather than a participant in them with no way of influencing what happens.

I was also pretty disappointed by the lack of Merrin, this level comes after Dathomir, and has to be played in sequence, so Merrin is definitely part of your crew by now. But she doesn't have any involvement in the story at all, not even just standing in the background. Although I never expected her to come adventuring with me, I did expect her to head off on her own to explore Bogano, since this is the first planet she's been on except her own. It would have been nice for her to appear from time to time as I returned to areas I'd already seen, and have her comment on this strange place.

So what do you really think ? : The level is brief, and has a lot more storytelling going on than I expected, which was nice. But a lot of what we witness is fairly pointless, as we don't discover anything new about the Zeffo, and the visions of the future are pretty obvious for anyone whose seen Star Wars.

Final Words : So one final level to go, as Cal and Cere attack the Inquisitors Fortress to retrieve the Holocron and confront Trilla one final time. . . .