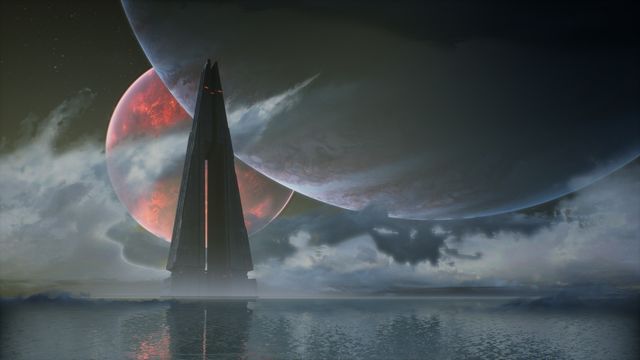 What is it ? : The Stinger Mantis arrives at Nur and Merrin uses her Nightsister Magic to hide the ship from view, allowing Cal and Cere to launch themselves aboard escape pods down to the planet without being seen.
The pods land in a lake, and Cal swims towards the Fortress, discovering large sections underwater, and entering the base itself by an airlock. Cere contacts him, letting him know the location of the Holocron, and Cal fights his way through the base and the various Imperial troop types that defend it.
Reaching a control room, he overloads a generator, causing an explosion and sections of the base to flood, allowing him to swim past closed off sections and blast doors which had been locked to block his progress. Further on he locates a training dojo, which seems similar to the one he remembers from the Jedi Temple, yet a corrupted version of it. He doesn't have long to dwell on this, as once he enters the chamber he is swarmed by waves of Stormtroopers and Droids of various types.
From there he enters the interrogation wing of the Fortress, and the prison itself, a multi levelled chamber containing many holding cells behind force fields. Taking an elevator, he arrives at the interrogation chamber and is attacked by Trilla once more. After a prolonged fight, Cal defeats her taking the Holocron, and Cere rushes in to speak to her fallen apprentice, Cere accepts the blame for what happened to Trilla, telling her she failed. Trilla begins to return to the light side, telling her former master that she held so much hate for her, but her face gives way to fear as heavy footsteps approach accompanied with a mechanical breathing.
Darth Vader looms behind her, and she asks the two Jedi as they ignite their lightsabers to "avenge us", before Vader strikes her down with a single blow, telling her "You have failed me, Inquisitor". Cere leaps at Vader, but is dismissed by a simple gesture from him, and she falls off a ledge towards the lava below.
Vader tells Cal that he would be wise to surrender, to which Cal replies "Probably" before leaping at the Sith Lord. Vader easily force grabs Cal, but Cal reaches out with the force pulling a section of the roof down on Vader and fleeing out of the chamber. Heading back to the Elevator, he sees Vader striding towards him, and as the doors close, Vader's saber begins cutting through the door, although Cal is whisked away to another level, deep below the ocean.
As he runs through corridors, he hears Greez and Merrin talking as they try to locate him and Cere, but at the next door he discovers Vader already waiting for him. Although Cal is outclassed once again, BD-1 causes a momentary distraction by jumping onto Vader with his welding torch, causing Cal to be thrown across the corridor dropping his lightsaber. Cal tries to pull the saber back to his hand, but Vader uses the force to ignite it to stab Cal through the side, before Cere leaps at him attacking with her Lightsaber.
As they fight, Vader tells her that he senses the dark side in her, and she would have made a good Inquisitor, but she unleashes her anger, attempting to crush him. But Vader just commends her for using the Dark Side, before Cal can help her resist the lure, and she holds Vader off with a force shield as Cal bursts open the corridor and the two swim out as Vader holds the water back.
As they swim towards the surface, they see Merrin approaching, and Cal reawakens on the Stinger Mantis, and Merrin embraces him before apologising. The group gathers around the Holocron and begin planning the next step, Greez commenting that the young Jedi will need some of his advice and training as well as that of the two Jedi. But Cal decides that the children's destinies should be guided by the force, and he destroys the Holocron with his Lightsaber before asking the group "Where to now?" . . .

High Points : While the level itself is nothing too special, taking the swimming sections from Kashyyyk and extending them to make a more aquatic level, it's the special sections which make this level. The fight against Trilla is a good one, and you feel rewarded for everything you've learnt through the game, standing a far better chance against her this time.
But it's Vader's entrance, as you hear his footsteps and breathing before you see him, and then the sheer power of the Sith Lord as you are forced to use every trick to just escape. It's atmospheric, scary and a brilliant section of the game as you just try to survive.

Low Points : However, I did personally find the section against Vader to be slightly annoying. He grabs you with the force, and you are to grab a section of piping from behind him with the Force, pulling it to smash into Vader and distract him so you can run. However, I played this section over and over, before watching a youtube video to find out what I was supposed to do, as the camera didn't show the section of piping by default and I had to pan the camera around to see it. Once it was on screen it was pulsing to signify I could pull it and the rest of the level played through easily. But the fact that I didn't even know it was there caused me to die over and over again, as if the game was hiding what happens next from me.
Not a massive fault, and one perhaps down to my monitor aspect (I was playing on PC, so my monitor set up might not be what the developers intended putting this vital information out of sight), but one that really annoyed me as I entered the fight with Vader a dozen times before I learned I had to pan the camera to the side slightly to see what I needed to do next.

So what do you really think ? : A great ending to the game, although Vader does feel a little crowbarred into the story, as he hasn't been a presence anywhere else in it. It would have been nice if there had been any hints that he was going to show up, something about Trilla calling for help dealing with Cal and Cere, or the two sensing a powerful Dark Side presence as they arrive on Nur. But nope, he just wanders in, and ends the game merely with his presence, as there's no way power wise, or narratively that you can beat him.

Final Words : So we reach the end of Star Wars Jedi: Fallen Order with the most obvious ending we could have expected, because we know that there is no secret academy of Jedi kids out there, so Cal and Cere must fail. The Holocron itself is just a danger to the force sensitive children, and something that the Emperor has been trying to get his hands on since the Clone Wars, so destroying it is the only option.
We're left with a bit of Sequel baiting, although I do kind of hope they never bother, and just give us another story, rather than the continuing adventures of Cal, as his story arc does feel pretty much complete, and we'd need an excuse as to why he forgets his powers again.