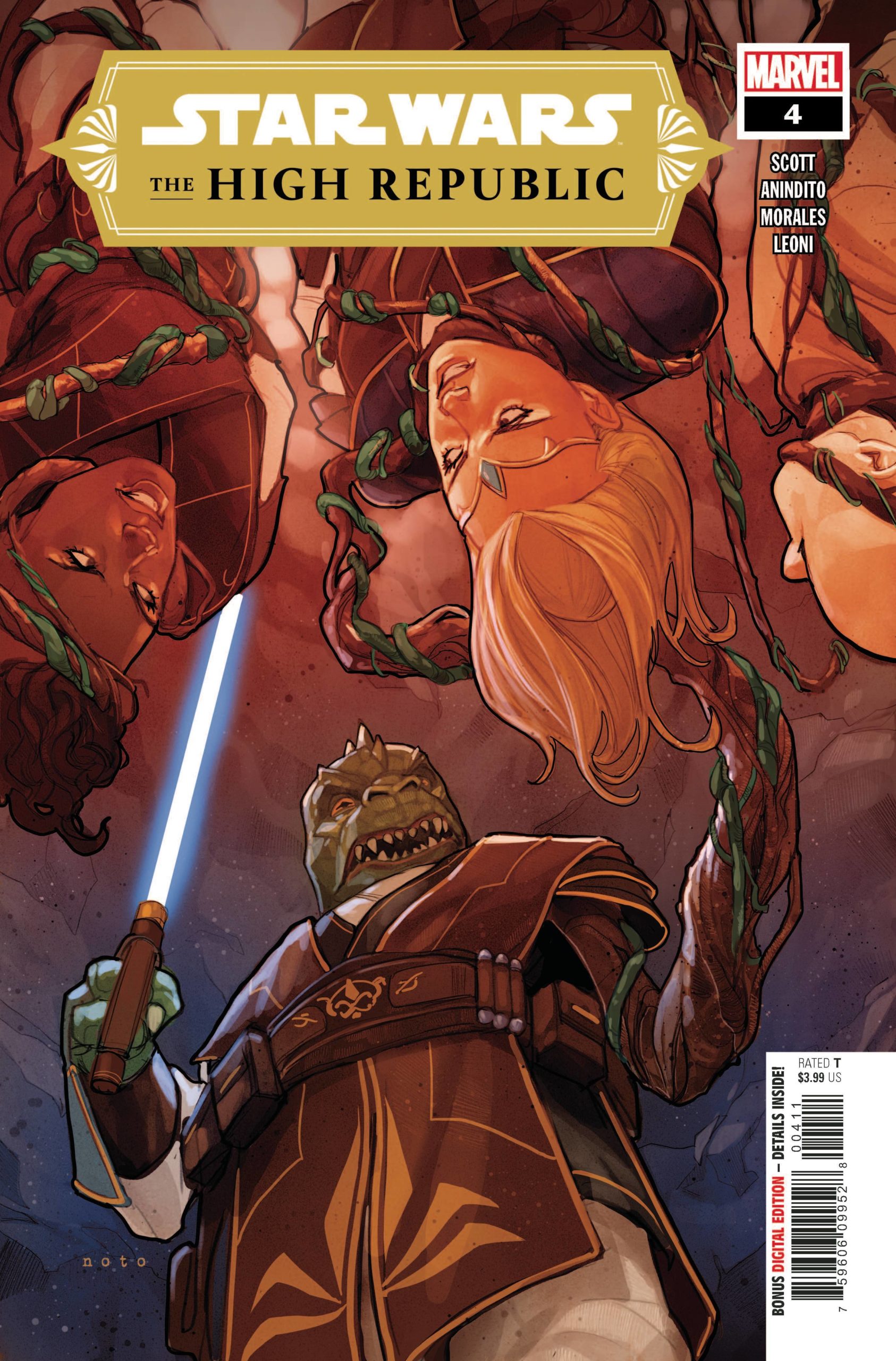 What is it ? : Flashing back 6 years, Keeve Trennis is training with her master, Sskeer. She is to leap across a chasm, using the Force to help complete the otherwise impossible leap. She is scared of failing, but Sskeer urges her to do it, to believe in herself. She attempts the leap but falls short, plummeting down towards the rocks below, when Sskeer catches her with the Force, and urges her to try again, always believing that she is capable.
Back to the current situation, Ssskeer stands over the others, Keeve, Avar Kriss, Ceret, and Bartol who are caught among the roots and tendrils of the Drengir. Avar Kriss questions Sskeer about why he has cut himself off from the Lightside, why he has fallen, but he simply causes the tendrils to clamp down over her mouth shutting her up, while he tells them the story of the Drengir.
How once they spread over the Galaxy feeding their hunger, and the Sith worked alongside them for mutual gain, but betrayed the Drengir trapping them within Sith Totems, until they were awoken by some travellers.
Meanwhile aboard the Starlight Beacon, they are carrying out the autopsy of the dead Hutt discovered back in issue 2. They discover his body is infested with pieces of a root system, which they discover is alive only moments before massive tendrils erupt from the corpse and attack.
Back on Sedri Minor, Keeve complements Sskeers new arm, commenting that it is very "viny", but as a Trandoshan, if he'd just waited his arm would have grown back naturally. That he'd taught her patience, that there were no shortcuts with the Lightside, and that she believes in him, just as he always believed in her.
The Drengir hunger and begin to enshroud Keeve in tendrils to consume her, when Sskeer lashes out with his Lightsaber, telling her that he needed to do this, as he needed to understand these creatures and understand their weaknesses.
He frees the group, apologising to Avar Kriss for his weakness and almost giving in to these creatures, lifting the Drengir away using the Force, as the group of Jedi ignite their lightsabers and attack.
Back in the town, Kalo Sulman, beats the Rodians that spoke the Jedi, telling them that they'll pay the price for breaking the rules. But Avar Kriss and Sskeer enter, stopping him, and berating him for knowing about the Drengir but doing nothing. As Sskeer smashes Sulman against the ceiling, Keeve urges him to remember who he is, and not stray towards the Dark Side once more.
However the settlement comes under attack from the Drengir, and as the Jedi prepare for combat, a Starship arrives overhead, announcing that it is here to liberate the settlement from Tyranny in accordance with it's agreement with the Glorious Hutt Cartel, and an armoured and cybernetically modified Hutt accompanied by beast riding Gamorreans emerge. . . .

High Points : While the internal consistency of the story is magnificent, with the segment on Keeve's training under Sskeer linking directly to their current situation, and the belief he displayed in her during her time training, mirroring her belief in him which allows him to free himself of the Drengir influence, is fantastic. It does feel just thrown in for this issue, rather than true building of the characters.

However the overall plot is nicely coming together, with us now knowing the Hutt discovered which led them to Sedri Minor was making a deal with Kalo Sulman for the Hutts to protect the settlement. While he might appear to be a villain, Sulman is just trying to protect his settlement, and keeping their end of the agreement the Hutts have actually provided protection forces.
It'll be nice if this plays out sensibly, with the Jedi being forced to backdown, as it's none of their business who this colony makes an agreement with for it's protection. While the Hutts might not be nice guys, they're not the villains here, the Drengir are, and it could be interesting to see the Jedi forced to fight alongside the Hutts to help protect the settlement, and then leave.

Low Points : I'm a little disappointed that the character trait they've been building in Keeve seems to be totally ignored here. Keeve in previous issues seems to always be joined, and in some ways helped by seemingly weak and defenceless creatures and beings. From the diminutive Ximpi in issue 1 to the child Bartol in the previous issue. These beings who other people tend to ignore have led her down paths which have saved lives and helped out in situations other Jedi might have missed.
However in this issue, Bartol is present, but totally ignored. Hopefully this will return in the next issue, and not just be forgotten about as it's one of the more interesting elements of the series so far, making Keeve far more grounded with the people of the Star Wars universe than the other high and mighty Jedi.

Sskeers redemption feels too easy, we've had 3 issues building on Sskeers fall towards the Dark Side, and just a few words from Keeve, about some background we never saw before this issue, and he's back to the lightside. Although there's a hint he's still on the balance point, and his dalliance with the Dark Side might not be over, its just all turned around in the space of a single page.

So what do you really think ? : This was in no way as good as the previous couple of issues, and has returned to normal Star Wars tropes. But that could just be the focus which is more on Sskeer and Avar Kriss, who are just generic Jedi and could fit in any time period really. The past couple of issues, focussing on Keeve and the twins Ceret and Terec (completely ignored this issue not even getting a single line) were far more interesting as these new characters do offer us something we've never seen before, especially the way that Ceret and Terec's interlinked nature could prove to be a massive disadvantage.

Final Words : I guess we'll see where the story goes, although I'm left with the feeling it's not going to be as interesting and different as I'm hoping. I worry that it'll just turn out to be Jedi good, Hutts and Drengir Bad, Jedi hit bad guys. Whereas I'm hoping for something more interesting as the Jedi realise that the Hutts may be bad, but at least they offer some protection to the weak, when the Jedi cannot as they're just not numerous enough.