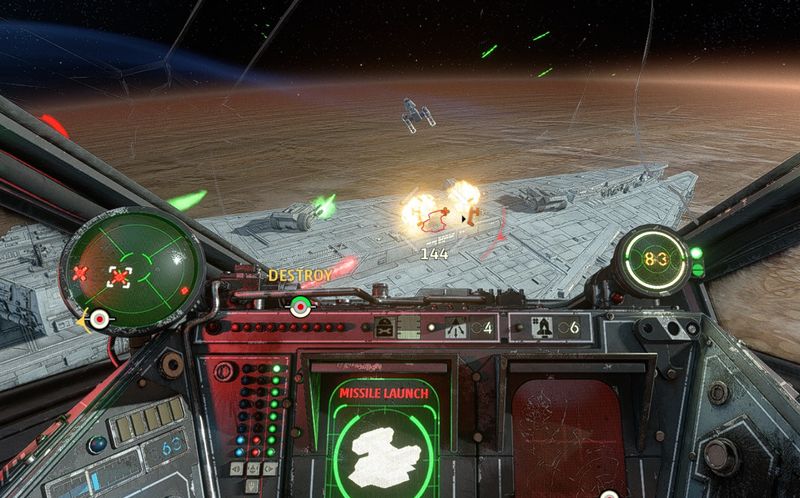 What is it ? : The Rebel fighters as Vanguard Squadron are briefed aboard the Temperance, they are being sent to take out Jamming Vessels which are blocking long range communications. Launching in your X-Wing, you are accompanied by Gunny in a U-Wing, Keo in a A-Wing, Frisk in a Y-Wing and Grace in another X-wing.
Making the jump to hyperspace Gunny and Keo head off on their own, which the rest of you search for evidence of the Jamming Vessels, only to discover the wreckage of an X-Wing.
Scanning it, they follow signals to a Gozanti transport and it's Tie Fighter escorts, dealing with them, and then scanning it's wreckage, this leads you to two Imperial IGV-55 jamming ships escorted by six TIEs. Taking these targets out allows Gunny and Keo to contact you, they have been jumped by an Imperial Patrol and need help.
The rest of you head to their position, to find them engaging an Arquitens Cruiser a Gozanti, along with a group of six more Tie Fighters. The Gozanti escapes although you can destroy its cargo, and the Squadron takes out the Tie Fighters and the Cruiser.
Now with Gunny in the U-Wing, you can repair and resupply with Missiles, before you head onto your final target of the mission, another Arquitens, Two Jamming Vessels and their Tie escort, taking out the Jamming Vessels before the Arquitens allows the Rebels to send in two Corvettes to aid you in the battle, although you can choose to take out the Arquitens yourself first if you like. No matter which tactic you use, the Tie Fighters are the most urgent target, and mopping them up before taking on the Capital ships is important.
You then head to the final waypoint, while Gunny suggests hitting the Cantina to celebrate, but Lindon Javes has a visitor and another mission awaiting. . .

High Points : An interesting mission where what you do seems to have an effect on what happens, Gunny and Keo can't call for help until you take out the first Jamming Cruisers, and then later the Rebels will send Corvettes to help deal with the Arquitens Cruiser if you've destroyed the other Jamming Cruisers.
This manages to make things feel as if you're taking part in a battle rather than just with a series of scripted events, even though in reality you're still dealing with a script, just a more complex branching one.

Low Points : While welcome help, it did feel slightly insulting that the Rebels send two Corvettes to help deal with the final Arquitens, when you've already taken one out this mission.
Really Rebel command? Now you send help? When everything is nearly over! You're just robbing me of my glory as a capital ship killer.

This mission marks the beginning of Lindon Javes talking about the mysterious Project Starhawk, he mentions how important it is, and how secret it is. However, given that I've already played Battlefront 2, and I've seen the Starhawk class Battleship in combat above Jakku, it's no surprise to me what Project Starhawk is, since not only do I know what it is, I know what it looks like and that the Project is obviously successful. Couldn't they have named the Project differently, and had the Starhawk be the first of the vessels, to create some kind of mystery?

So what do you really think ? : An interesting enough mission, but it reminded me of a similar mission in Freespace 2 into a nebula where you're hunting for enemy ships. But that mission has a number of Squadrons involved, and you hear their radio chatter, as the mystery builds, and one of the Squadrons totally disappears mid-mission.
The Freespace mission builds tension far better, as while communication is limited in this one, it's just a hunt and kill mission, without any mystery or tension as to what forces you're actually facing.

Final Words : It's fun enough, and the banter between the members of your Squadron before and during missions is one of the better elements of the game, making you really feel as if they're people. But this has been done in Starfighter Simulators way back to the days of the Wing Commander series, and I'd rather have Maniac on my Wing than any of these guys, as at least he had a strong personality, rather than just being a bit of a stereotype.