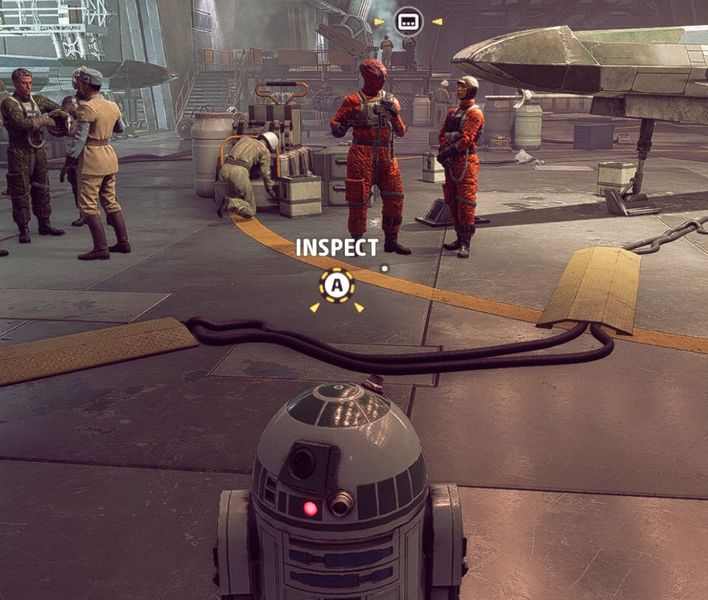 Mission 2: The Skies of Yavin

What is it ? : Still as a Rebel pilot, in the hangar you interact with Gunny and Keo who offer thanks for the aid that you lent in the last mission, emphasising the team effort. Heading into the Briefing room you meet Wedge Antilles, and you are told that they need an intact Imperial Star Destroyer for Project Starhawk.
They have disabled the Star Destroyer Victorum in the atmosphere around the world Yavin, and need your team to support a boarding effort to seize control of the ship.
After the briefing is over, Grace tells you of her fathers patriotism for the Empire and the power it holds, Wedge tells you that like Lindon Javes, he once flew for the Empire, and how Rogue Squadron usually handles missions like this. And Ardo and Javes warn you that while the Star Destroyer is wounded it's still a dangerous and powerful opponent.
Arriving around Yavin, you immediately must support the Rebel forces already there, a damaged Corellian Corvette and it's fighters, but soon turn your attention to the Victorum. It's shields are already down, and you are designated to take out it's targeting systems, although you may also take out individual weapons (although this turns out important later).
Once the vessel is relatively harmless, and has launched more Tie Fighters and Interceptors which you deal with, you are asked to scan areas of the Star Destroyer to identify the best boarding point, which turns out to be at the base of the neck, which your squadron members identify as the trash chute (as it was in The Empire Strikes Back).
While you wait for the boarding team to arrive, Frisk gets in trouble with two Interceptors, and you have to rescue him, but shortly afterwards 3 U-Wing's carry the team arrive and head for the Victorum.
A Quasar Fire Carrier arrives as well, and launches fighters, which you have to deal with and destroy the Carrier before they damage the U-Wings and interfere with the mission.
Receiving updates from the boarding team as they fight their way to the bridge of the Star Destroyer, when another 3 Quasar Fire Carriers arrive, however if you didn't disarm the Victorum the Boarding teams take control of it's weapons and it opens fire on the smaller vessels destroying them and ending the mission with the Star Destroyer firmly in Rebel hands.

High Points : The game really starts to use dialogue to tell it's story here, with not only the briefings, but the chatter around them fleshing out your team, the story and the world. During the mission as well, the chatter continues, and your squad mates begin to feel like real characters with personalities rather than just computer piloted drones.
Also as you defend the Star Destroyer and the boarding teams, the continuing updates from them as they progress through the vessel, trying to seize control of it creates tension as you're not aware of how long you need to hold space against the increasing Imperial attacks, and when finally you get confronted by 3 Carriers, things look tough until you realise that now you've got the power of an Imperial Class Star Destroyer backing you up.

Low Points : The missions are proving by this point to be pretty simplistic, while the atmosphere of Yavin is a nice backdrop, it doesn't provide any particular challenges like other Starfighter games have done with atmospheres in the past. And apart from the scanning section of the mission, it's just a series of waves of enemy vessels to engage and destroy.
While this is the meat of any Starfighter simulator, it's nice in pre-scripted missions for them to provide something interesting going on and particular challenges for you to overcome. But it's early days yet.

So what do you really think ? : For the setting and the appearance of Wedge, it's quite a memorable mission, after all its not every day you get to help steal a Star Destroyer, but there's really not much meat on the bones of this mission and it's really quite conventional.

Final Words : It's peculiar how Squadrons handles the switches between factions, as by this point you're settling into your role as a Rebel pilot and getting used to the comradery between your wingmen, but all too soon you'll be thrown into the Imperial pilots role and the much more regimented and controlled environment of the Galactic Empire, which will be pretty jarring at the time as a player I'm used to playing as the same person throughout a game and it feels really quite weird being forced to undo what you just achieved as you switch sides.