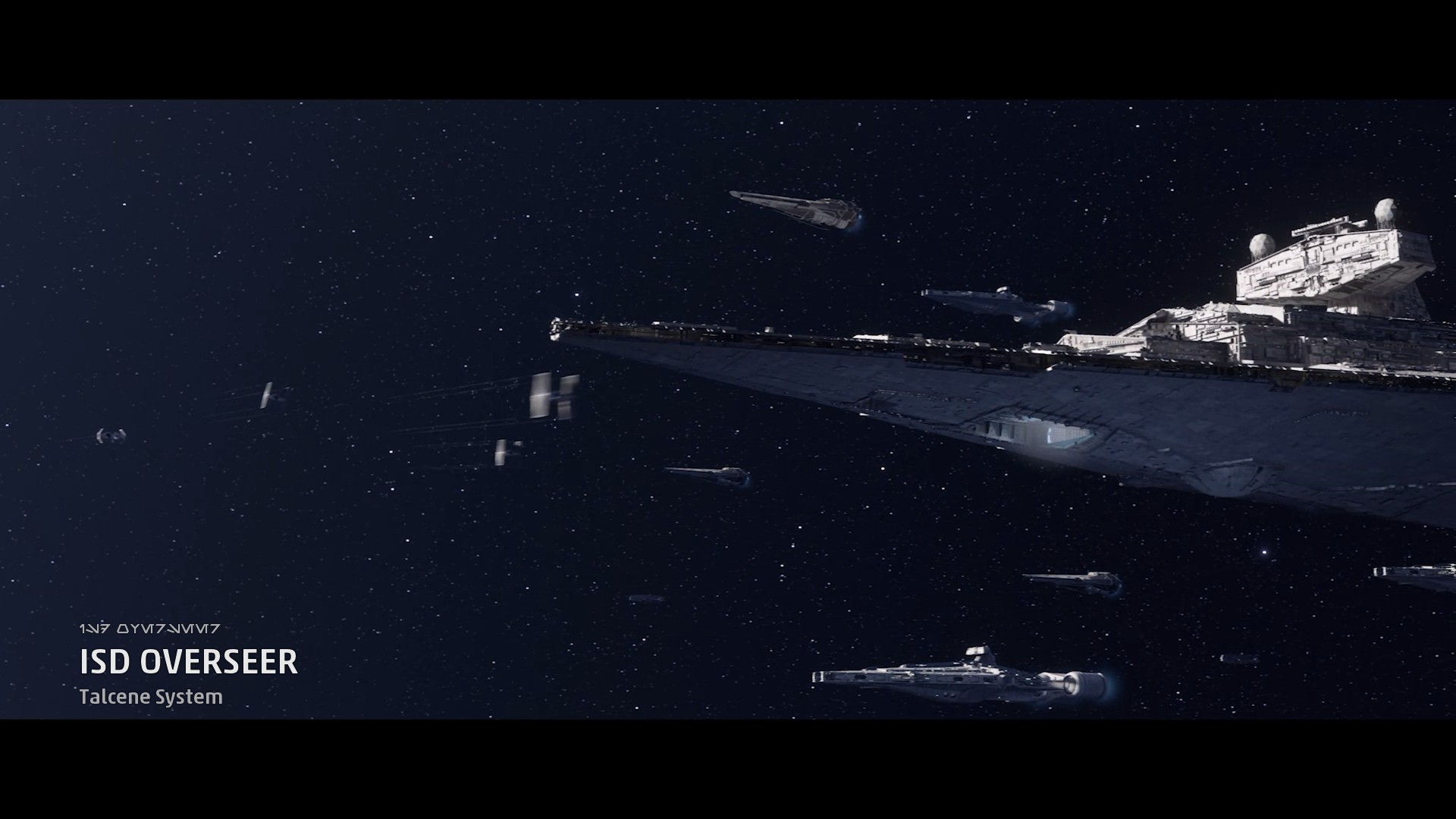 What is it ? : And you swap over to the Imperial side, where you're still playing the same pilot as you did at the beginning. The Empire has treated all those involved in Lindon Javes defection as disgraced and it has hurt their careers. Caption Terisa Kerill assigns you to Titan Squadron as she believes you have personal motivation to help deal with Javes.
The briefing informs you that a spy, Agent Thorn, has discovered information on Project Starhawk, and you are to help extract her from an orbital outpost above Hosnian Prime. This operation is behind enemy lines, you are to secure the outpost and allow the shuttle Gladius to land and retrieve her, and then escort the shuttle back to the Gozanti Cruisers and depart.
After the briefing you can speak with Captain Kerrill, and with Rella Sol one of your squad mates, who tells you of her parents who were senators, while Kerrill speaks of the state of the Empire since Endor.
In the hangar your remaining squad mates introduce themselves, Shen who is an older pilot, who has been injured many times and repaired with cybernetics, and Havina Vonreg, who is keen to destroy the Rebellion.
Taking off and making the Hyperspace jump to Hosnian Prime, you are warned off by the New Republic, and engage the missile platforms which defend the orbital facility. After these are dealt with you move to the bottom of the station to take out its shield generator by flying inside the stations shields and firing on them directly.
Once these are down, it's a matter of taking out the stations turrets and dealing with a couple of slow moving GR-75's which are trying to flee. With the GR-75's dealt with and the turrets destroyed it is a matter of mopping up the X-Wings which are defending the station before calling in the Gladius to retrieve the spy.
As it flies in, it is ambushed by a couple of A-Wings and three X-Wings which you must destroy, as although the Shuttle can take a beating you need to minimise damage to it. As it lands, more X-Wings and A-Wings attack supported by a couple of U-Wings.
Hopefully by the time these are dealt with, the Gladius has Agent Thorn aboard and is ready to depart, but as you escort it away a couple of Corellian Corvettes arrive, and you have to protect the shuttle against their X-Wing escorts. As the shuttle avoids attacks and tries to reach it's hyperspace jump co-ordinates more Corvettes arrive, and a number of Frigates, until you are facing no less than eight Corvettes and three Nebulon-B Frigates.
The Shuttle eventually reaches it's co-ordinates and makes the jump to hyperspace, meaning that your squadron can rendezvous with their Gozanti transports and end the mission.

High Points : This mission really heaps on the pressure, making you decide to deal which battles you should avoid, as in your shieldless Tie Fighter, with only a repair unit and support from Shen in his Tie Reaper to keep your fighter in one piece. With far too many Capital Ships to deal with at the end, and numerous enemies to prioritise early on, the mission isn't as straightforwards as the earlier ones.

Low Points : I know that Titan Squadron are supposed to be Elite Pilots, but this mission makes the Rebels out to be idiots, just some Tie Fighters manage to take out numerous X-Wings, A-Wings and fly rings oround eleven Capital ships. It feels like the Empire here really shouldn't have a chance, unless there was some kind of trick to it (jamming vessels to interrupt scanning, fire control and communications, for example).

So what do you really think ? : It's a fun mission even if it makes Tie Fighters ridiculously powerful for the disposable vessels that they are supposed to be. The fact the mission allows you some flexibility in how you deal with targets and complete sections of it is appreciated after so many of the previous missions totally feeling on rails.

Final Words : And we're sticking with the Empire for the next mission, although it won't be for long.
And for all of my dislike of playing as the Empire, where the Squad lacks the comradery of the Rebels, I do have to mention that I really like Shen as a Squad mate. An aged pilot, who has given his life, and many body parts, to the Empire over the years. He wears damaged armour as a badge of honour, and talks like many military veterans of the aches and pains the patching up of his body has caused, and the reasons he has assigned to them, also claiming that the pain eases when he sees Rebels burn. A bitter man, but one that I respect and love the characterisation of.