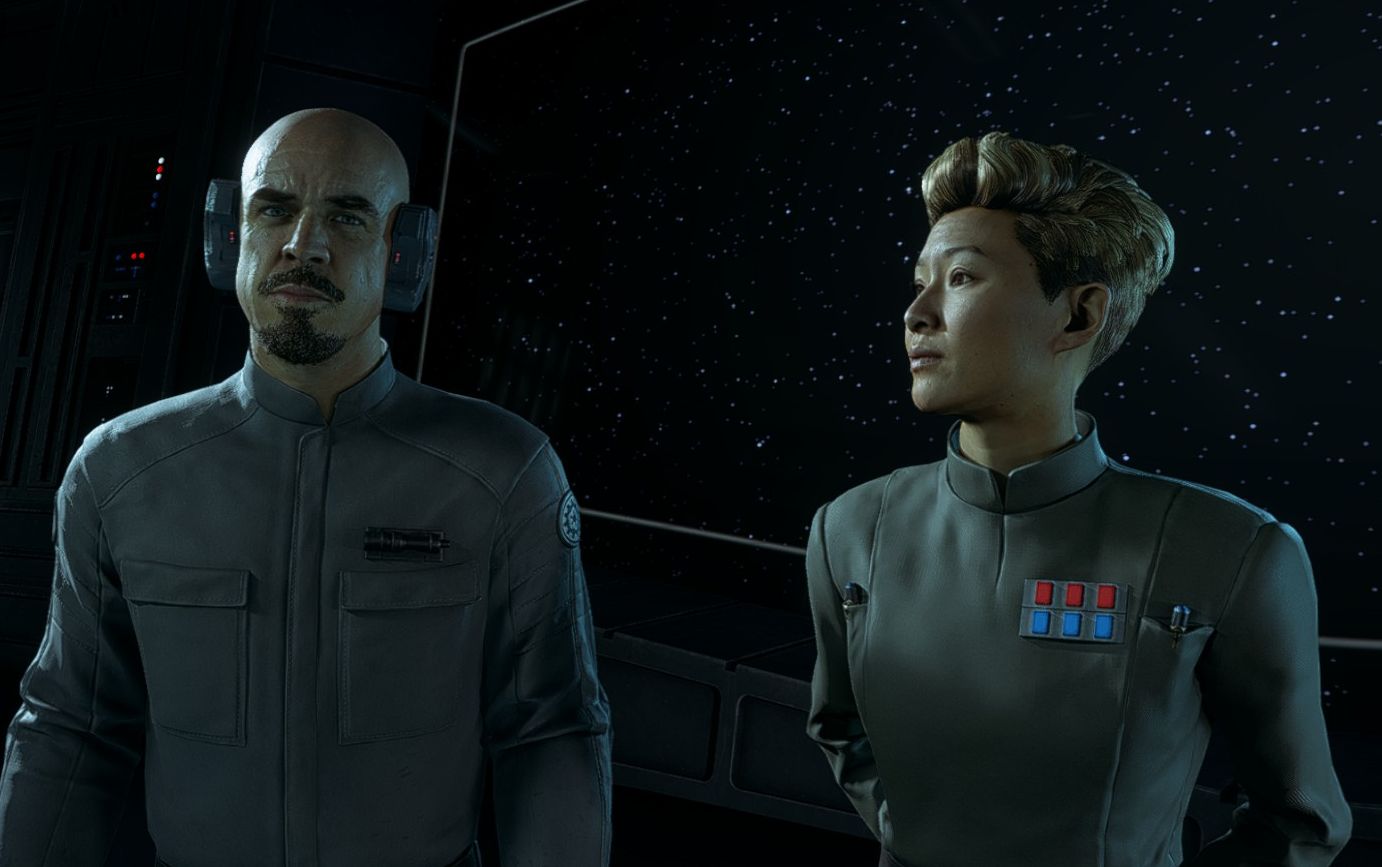 Mission 5: The Trail from Desevro

What is it ? : Continuing on the Imperial side, you speak to Varko Grey, one of your squad mates, who expresses relief that you're a good pilot as he thought you being assigned was nepotism. Heading into the next briefing, you meet Captain Kerrills assistant from Imperial Intelligence, LT-514, and discover that the rescued spy has revealed that Rebel Engineers are heading to Project Starhawk from Hosnian Prime through the contested Desevro system.
Your mission is not to destroy the convoy, but to follow it through the debris field it will sneak through and then track it's hyperspace destination as it jumps away.
After the briefing, Kerrill and LT-514 express concern that the local Imperial forces led by Captain Amos will interfere, and your squad mates express distaste for traitors like Iden Versio, and that destroying Project Starhawk may unify the remaining Imperial forces across the galaxy under one leader.

Flying a Tie Reaper, you sneak through the debris field and monitor the convoy which consists of a Nebulon-B, three GR-75's and two Corellian Corvettes as it approaches and passes through the field. However you are soon contacted by LT-514, who informs you that the Star Destroyer Tormentor has arrived, and Captain Amos has decided to pick off the easy target he has been informed of and warned away from.
You head for the Tormentor and have to intercept missiles as the Star Destroyer launches them towards the Rebels.
After you have stopped this attack, we are told that the GR-75's have split from the rest of the convoy and you are ordered to intercept and disable them, dealing with their defensive X-Wing escort as well. Once they are disabled, the Empire dispatches some shuttles to board them. You must defend these as they dock with the GR-75's, capture their data, and then head back to the Overseer.
Finally you are ordered to cover the retreat of the Tormentor, however Captain Amos refuses to retreat, and the Star Destroyer is destroyed as the Rebel frigate explodes, catching the Star Destroyer in the blast, allowing you to complete the mission.

High Points : One of the high points of this mission for me is the introduction of LT-514, who differs from most of the Imperial officers you meet, totally loyal to the Empire, he is very much a thinker who respects his enemy and works from a position of knowledge rather than just pure faith in the Empire.

The mission itself, does make things a little more challenging, as although the Tie Reaper is massively more rugged than the Tie Fighters you've been piloting for the Empire until now, but the fact that you are loaded to disable the shuttles puts you at a disadvantage against the X-Wings and missiles later on.

Low Points : The destruction of the Tormentor feels arbitrary, that it is destroyed by the explosion from a capital ship it just destroyed feels weird and unlike anything we've seen in Star Wars before (I never noticed any ships getting taken out by the blasts from the numerous vessels lost over Endor).

It's also weird that the Tormentor fields no Tie Fighters of it's own, as your squadron is the only one flying for the Empire, and neither the Tormentor or the Overseer launches any other fighters despite there being a large number of Rebel fighters in flight.

So what do you really think ? : While still a fun level, the game is feeling very much like a game, with things happening purely for game reasons. The Empires massive capital ships launch no other fighters despite carry dozens of squadrons. Why? Because you as the player need to deal with everything, that's the game after all.
This breaks the sense of immersion, as you can see the massive cracks in world building required to ensure you're at the core of things.

Final Words : Squadrons remains a fun game at this point, it's just that it's not building a world or story particularly well, just throwing challenges at you to keep you distracted.
Which is no massive flaw, but does mean that it's a fairly shallow and short lived experience. There's definitely no need for me to attempt this mission again to experience it, the only reason would be to beat my high score.