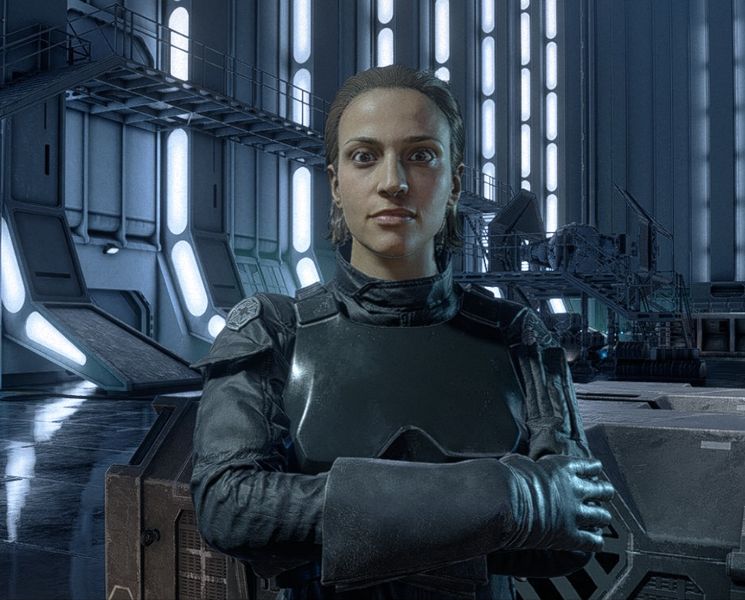 What is it ? : In the Imperial Hangar, Rella Sol congratulates you for the last mission, asking what you'll do with your prestige after the war, and you head into the briefing with her.
Inside you are told that the last mission was a success as Vanguard squadron have been summoned to Mon Cala leaving the Starhawk exposed and vulnerable. Titan Squadron is to lead the attack on the Starhawk, dealing with any remaining fighters and then targeting the dockyards shield generators before returning to the Overseer to resupply with Baradium munitions which you'll then use to disable the Starhawks hyperdrive so it cannot escape when the Overseer delivers the killing blow.
Afterwards LT-514 assures you that the Starhawk cannot use it's tractor beam weapons while docked, as they'll endanger the shipyards. While Kerrill tells you that your starfighter, the Overseer and the Baradium munitions are all just tools, what will decide the battle is the will to succeed.
Before launching, Grey and Sol discuss what they'll do when the war is over, and Grey suggests he'd like to settle down at somewhere by the water with his husband, while Shen will just continue to serve.
As you launch and approach the shipyards, you must disable missile batteries hidden in the asteroids, these target the Overseer and you must destroy any of the slow moving missiles before they damage the Star Destroyer.
X-Wings launch from the station, and you dispatch these before moving onto dealing with the shield generators, however the Starhawk remains a dangerous opponent, with it's numerous guns creating a hazard you must avoid as you head towards your targets.
As you destroy the shield generators, more Rebel fighters scramble from Hangars around the station, so you must target these as well as dealing with the fighters.
The station launches two GR-75 filled with workers trying to escape the station, but you are ordered to show them no mercy and destroy them and the three Corvettes which attempt to protect them. Once all targets have been destroyed you must return to the Overseer for the Baradium warheads, these deal massive damage to the Starhawk and take out it's Hyperdrive to complete the mission.

High Points : The shipyards are an interesting and fun environment to battle around, with the numerous shield generators and hangars providing targets and obstacles as fighters launch directly out of the station into combat. Not sure why the Rebels leave some of their pilots sitting around until half way through the battle rather than scrambling everyone at once,

Low Points : I find it weird at the beginning of the mission where your squad mates are discussing what they'll do when the war is over, as if the destruction of the Starhawk will end the war. The Rebels managed to bring the Empire to it's knees without the Starhawk, so I'm not entirely sure why they would suddenly crumble without it now.
While the missions to destroy (and protect when you're playing as the Rebels) seem important, they're hardly pivotal in the direction of the Galactic Civil War.

So what do you really think ? : An interesting enough mission, with an enjoyable play environment, but there's really nothing new here, and the story is bending to match the game, as things are happening only to keep the game going by this point (you've blow up dozens of capital ships, including a number in this mission alone, but the Starhawk just won't go bang like the others).

Final Words : While this feels like it should be virtually the end of the game, we're actually only about a third of the way through, and it's going to take a whole lot longer to take down the Starhawk.