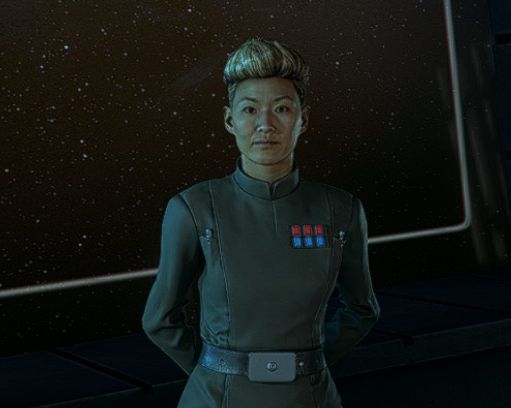 What is it ? : In the Imperial Hangar, Havina Vonreg is frustrated at having to abandon the attack on the Starhawk at the last minute, with; Rella Sol supporting Captain Kerrills decision to withdraw when the missile guidance system failed.
In the briefing room, Captain Terisa Kerrill claims that vengeance is sweet and now the Starhawk will be lured into the Ringali Nebula where it can be destroyed along with Vanguard squadron.
The plan is to catch the Rebel fleet as it moves through the scrapped remains of Imperial ships which were used to build the Starhawk, Titan Squadron will locate and detonate the still active reactor cores within these remains, with the explosions taking out capital ships which the fighters would struggle to damage.
As the mission begins you are sent to scan the reactor cores which lie within the corridor through the wreckage of scrapped Imperial ships. Out of the ten cores, there are 7 active ones, but as soon as you've identified these, you are attacked by a group of X-Wings.
After these are dealt with, a group of four Corvettes attempts to travel down this corridor, and by detonating the reactor cores, you can destroy these ships in just a couple of blasts, making this easy with 7 cores to use, even if they split up.
Moving onto the next lane, you need to scan the cores this time while a group of X-Wings are attacking you, this time another group of four Corvettes moves faster through the corridor, so you need to act quickly, especially as the cores take longer to detonate, so timing becomes more tricky.
Finally a Frigate arrives to take the third corridor through the debris field, but out of the cores at the beginning of the route only one is active, which only slightly damages the frigate which is also heavily escorted.
However at the end of the route, and scanning the cores there reveals that they are all active in cluster, and you are told that detonating one will set off a chain reaction, which destroyed the frigate easily.
Any remaining X-Wings leave, allowing you to return to the Overseer having completed your mission.


High Points : Introducing a timed element to the game, as the ships must be destroyed before they pass through the corridor is a quality addition to the game to add variety, but it also adds frustration.
And while the environment is interesting enough, the premise of the mission feels quite insignificant compared to the missions around it, does no-one else on this Star Destroyer actually do anything?

Low Points : While an interesting idea, having to detonate explosions which will take down larger targets, it feels a little odd that these vessels which you normally would just take out with your guns, now require special planning to destroy.
The timed element to the mission, where you have to destroy each ship before it escapes, is annoying, as one missed ship and the entire mission fails.

So what do you really think ? : Not one of the better missions in the game, it's pretty frustrating having to replay if you miss a single ship with a time limit running, which means you must target the cores almost exclusively, leaving the X-Wing escorts to harass you unhindered.

Final Words : Well, only one more Imperial mission to go and the game is starting to drag a little, the big attack on the Starhawk felt like the finale of the game, but here we are still playing. It's almost as if the Attack on the Death Star occurred half way through the original Star Wars, and the film just continued because it just didn't quite blow up yet.
They could have tried an Empire Strikes Back, with the big attack at the beginning, and the rest of the story being about tracking down and finishing off the survivors. But this half and half approach just feels like they finished the story but realised they needed to pad the gameplay time out, and instead of extending the middle, they kept adding to the end.