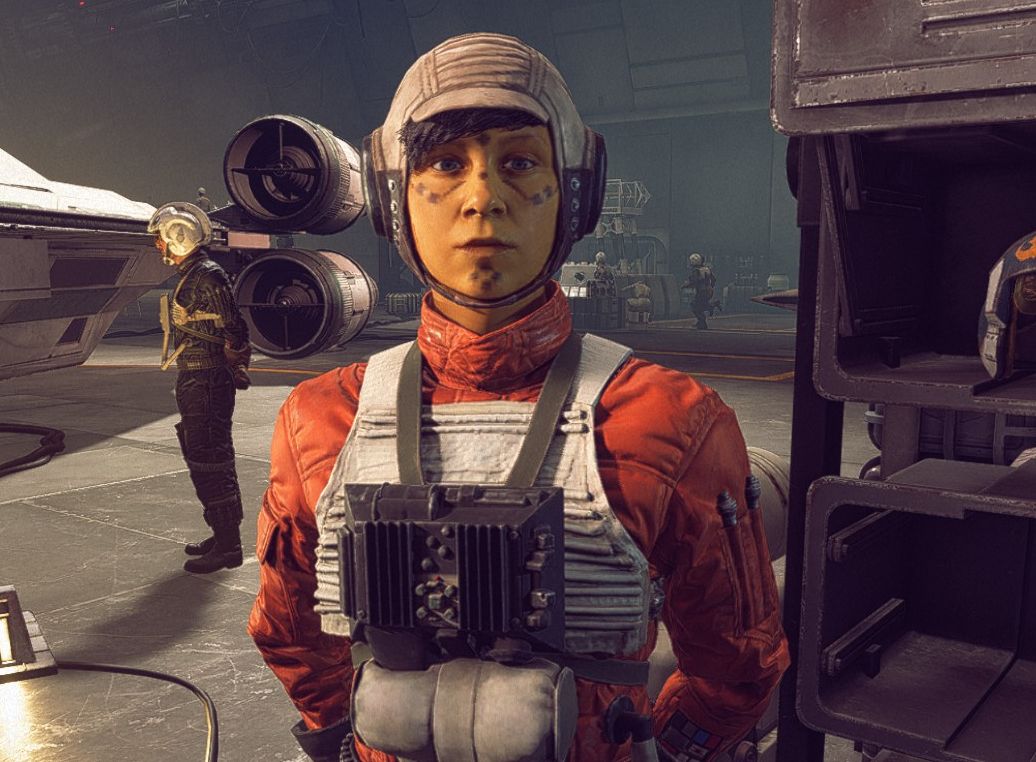 What is it ? : And we're back over to the New Republic Hangar (which I know I keep referring to as the Rebels), and Keo speaks to you about Lindon Javes command to head into the Ringali Nebula. Once in the briefing, Javes tells you that you are trapped between the Overseer and Imperial reinforcements, with your only hope to summon New Republic allies to help, however the nebula blocks long range communication.
They've located a broadcast hub around the moon called Galitan, which if restored will allow you to communicate outside the Nebula. You are to escort Chief Mechanic Zerelda Sage to the hub and protect it while she restores the transmitter.
Afterwards Javes speaks of how in the Empire doubt is seen as disloyalty, but he accepts that overcoming doubt is essential to good leadership. Hera Syndulla speaks of her faith that Vanguard Squadron is up to the job, and Ardo tells you that everyone is feeling the strain of the situation.
Frisk tells you that after Endor he considered leaving the team, but Grace convinced him to stay, where he feels at home. Gunny gives a speech about not giving in, despite how bleak the odds look, and Zerelda is scared as it's her first mission off the Temperance.
Launching you escort Zerelda aboard a Corvette to the Broadcast hub, and as she begins work a group of Tie Fighters and Bombers head for the hub. As you fight these, a second wave arrives so you must concentrate on the Bombers rather than mopping up all their fighter escort.
Zerelda gets the comsats surrounding the Hub online, and the Tie's begin targeting them as some Tie Interceptors and more Bombers join the battle, the Comsats are weaker than the hub meaning that use of turrets and tactical shielding helps.
As the signal builds and reaches 50% it suddenly drops to zero, and Zerelda realises that an Imperial jamming ship is in the area, so you must target it to remove the jamming field.
Once the jamming ship is destroyed, the signal jumps up to 100%, and the mission is complete.

High Points : Essentially one long escort mission, but this one manages to not be as annoying as many others of this type. With numerous Tie Fighters, Interceptors and Bombers involved, it's a bit of a desperate brawl and all the more fun for it.

Low Points : The Comsats are a bit weak, and it's possible to lose them before you can bring yourself back into position if you have been chasing down a target on the other side of the Hub when they are attacked. But that's kind of what the mission is all about, sticking close to the Hub and Comsats to defend them.

So what do you really think ? : A standard and fairly enjoyable mission, however all of the talk of the strain of the situation, and the doom and gloom the NPC's are feeling doesn't really come across in the gameplay. This doesn't feel like it's an impossible fight, it just feels like another day in the cockpit blasting the enemy. You're pretty much aware that by playing competently that you'll win and save the day.

Final Words : We swap back and forth between the Empire and Republic here, back to the Empire for the next mission, which really doesn't let you grow attached to one side or the other, as you're obviously just someone playing a game, doing and undoing your own actions.
It's fun, but totally fails on immersion.