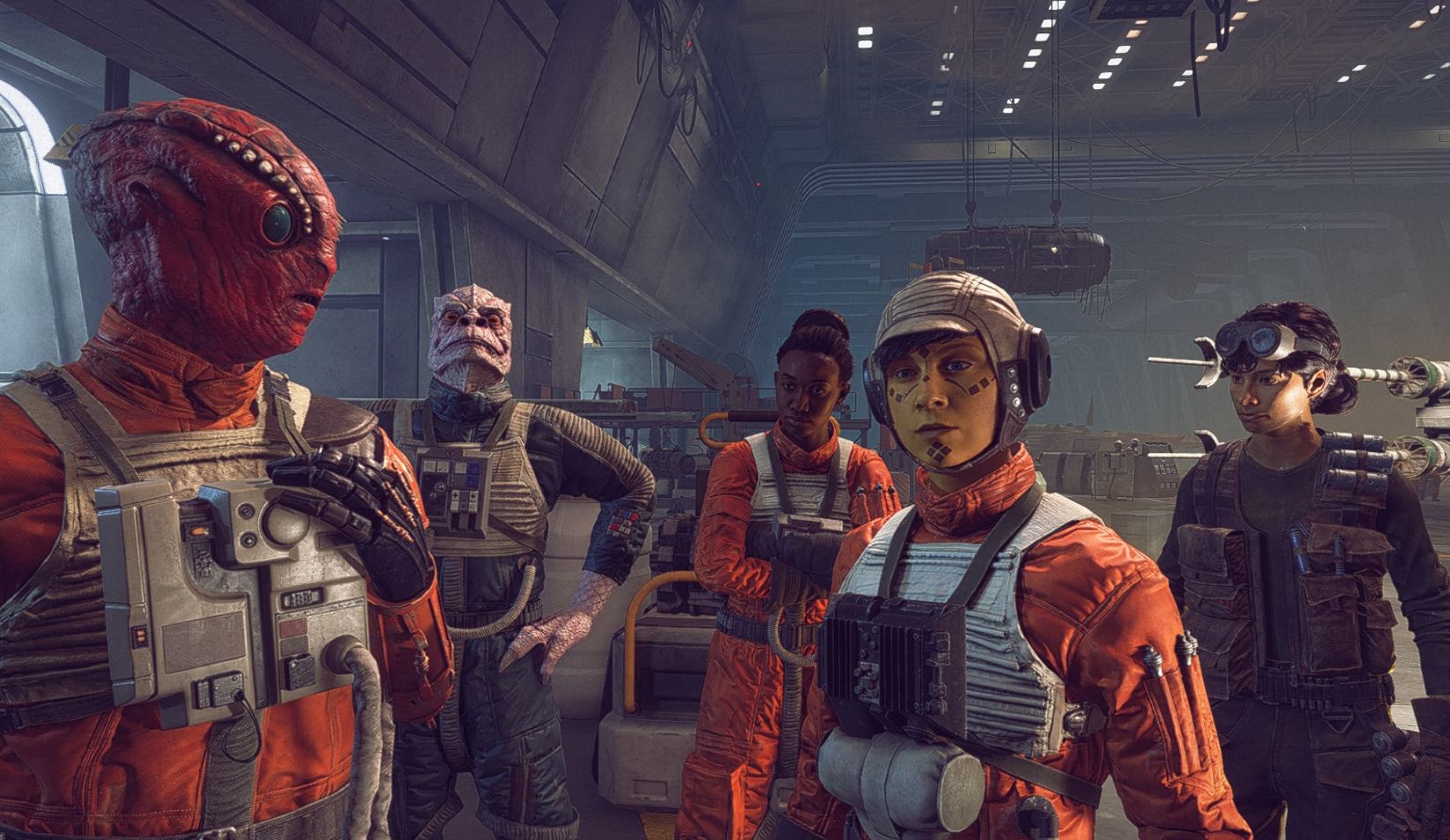 Mission 14: Last Flight of the Starhawk

What is it ? : So we're onto the final mission and back with the Rebels, Gunny tries to rally the squadron as he confirms that Lindon Javes is apparently dead. Heading into the briefing, Hera Syndulla tells you she needs you to be the leader and inspiration that Lindon believed you were.
Although Anvil Squadron and Lindon gave the fleet chance to escape, they have been left behind, an unacceptable situation, so Vanguard Squadron must return to help them. Hera's plan is to cause the wreck of the Starhawk with its malfunctioning reactor to crash into a nearby moon, the explosion of which will destroy all nearby Imperial vessels.
The Starhawks tractor beams are randomly firing, so she wants two Corvettes to fly into the beam to pull the wreck in the right direction, but first you must destroy the Star Destroyer which is nearby or it will destroy the Corvettes.
While the Starhawk is being destroyed, the engineers and plans are safe for the next one to be built.
After the briefing, they discuss the loss of Javes, his gratitude to you for saving him at Fostar Haven, and how his actions have allowed Nadiri to be reclaimed and the engineers to be saved. Frisk suggests heading to a cantina on Nar Shadda after the mission is over and your team has earned a break, but Grace is skeptical of whether you'll all survive.
Like the last mission, you can equip all your ships, and swap them during the mission, giving you dogfighting ability and the power of bombers.
Out in space the Star Destroyer is your first target, and the bombers are obviously the best choice for taking out its shields and finishing it off. After it's destruction a fighter is going to be best for its dogfighting capability, and the squadron begins receiving an odd transmission from inside the Starhawk, and you are ordered to investigate.
As you get close to its location, Lindon Javes fighter bursts out from the Starhawk, his fighter has been trapped inside and now he joins the battle. You must protect the Corvettes from waves of bombers that attack them, before an Imperial Light Cruiser arrives, which when destroyed is replaced by a second Arquitens.
When the second cruiser is finished off, the Starhawk is moving fast enough that nothing can stop it, and it smashes into the moon causing a massive explosion, and a shockwave which races towards you. Following Lindon, he leads you through the debris field, heading through colliding asteroids and other wreckage before you can safely escape Galitan completing the mission and the game.

High Points : Weaving together elements of former missions, this manages to be an enjoyable enough end to the game, taking out a Star Destroyer is fun, as is the final moments as you desperately race for safety.
Towing the Starhawk into position with the Corvettes reminded me of the final mission of Freespace 2, when you've got to defend the Bastion as it gets towed into position before it explodes as well. But where Freespace 2 had the guts to not guarantee your survival (there is a very good chance that you don't escape through the jump point to safety, as if you're actually following your mission objectives there is no way you have time to make it) and let you heroically die at the end, Squadrons has no option for a heroic death, only for a victory.

Low Points : So the Empire celebrated victory last mission, but now the Rebels get to celebrate victory this time as well. Squadrons tries to present itself as a Heroes on Both Sides, while in reality it's definitely of the opinion that the Rebels are the true heroes.

Also Lindon Javes crashed into the Starhawk, and then has spent a considerable amount of time flying around its interior waiting for someone to get close enough for him to leave. I could almost believe it if he had been on foot scavenging parts for his fighter to fly again, but the Starhawk doesn't seem big enough for a fighter to be lost inside for a considerable length of time. So it seems total BS. They really should have let Javes die, give the Rebel victory some cost at least, but nope, in Star Wars no one stays dead these days.

So what do you really think ? : An interesting enough ending to the game, but it has nothing new in it, has one of the worst twists I've ever seen, and feels derivative of games over 20 years old.

Final Words : So that was Star Wars: Squadrons, quite fun for a budget game (although 25 bucks for a game doesn't feel particularly budget to me), and provided around 8 hours of fun, which isn't particularly less than Fallen Order or Battlefront 2, so pretty economical. But both those games were more memorable, and ones I'm interested in playing sequels to, whereas Squadrons I definitely feel as if I've had enough of the game and it did everything it set out to do.
As a game hailed as the spiritual sequel to the X-Wing and Tie Fighter series, it really isn't, and I cannot imagine people still raving about this game in 20+ years like they still do with those games.