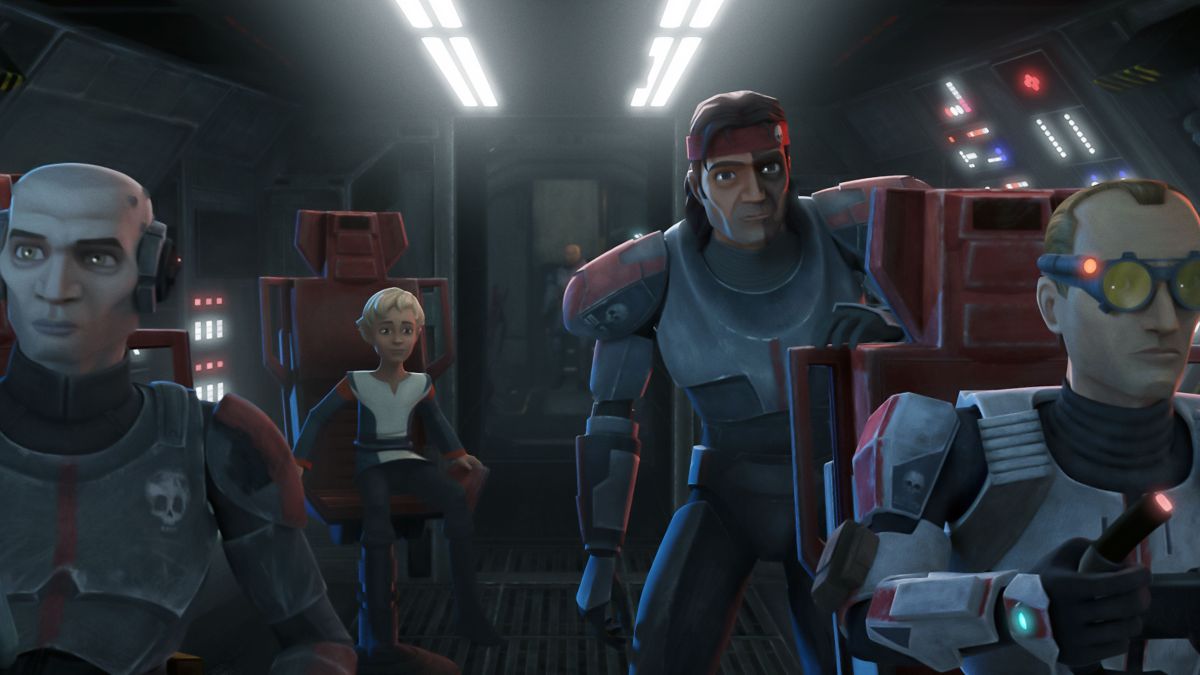 What is it ? : The Havok Marauder is travelling through hyperspace, they took some damage from their escape from Saleucami, but Tech says repairing it isn't as important as checking out their control implants to ensure that they don't kick in and turn them against each other. Hunter notices that Omega has no place aboard the ship, it's a military vessel where each of them has a bunk and role, but she is trying to make herself comfortable against a power droid.
Suddenly the Hyperdrive fails, sending their ship crashing down onto a nearby moon, and Tech and Echo realise that a capacitor has failed. Fortunately they have a spare onboard so they head outside in breath masks to change it. After fixing the capacitor, they investigate some claw marks on the ship, and discover that an Ordo Moon Dragon has been drawn to the power aboard the ship, and it steals the capacitor.
Wrecker complains of a headache from the crash, and the others head outside to search for the capacitor.
Meanwhile on Kamino, Tarkin meets with an Imperial officer, Rampart, who is in charge of forming the Stormtrooper corps, he has hand selected a group of troopers, who they want to be trained by Crosshair to pass on the best of the Clone Trooper training. They are sent to Onderon to finish the mission the Bad Batch failed at, killing Saw Gerrera.
On their mission, the new troopers express that the Clone Troopers are obviously failures as they are being replaced, and that Crosshair should enjoy being commander, for now. They catch up with a group of Gerrera's people, who they easily defeat as they are mainly civilians.
When they refuse to answer questions, Crosshair kills one, and orders his troopers to slaughter the rest, which the troopers refuse, as one of them says they are not executioners, but Crosshair tells him those were the orders and guns him down, so the others fall in line and murder the unarmed civilians they just captured.
Back with the Bad Batch, Hunter and Omega track down the Ordo Moon Dragon, and it knocks Hunters mask off causing him to collapse before Omega can put it back on him. She takes his blaster and tracks the Dragon into it's lair, discovering that it is interested in the power within items, she distracts it by giving it her torch, and retrieves the capacitor, allowing a recovered Hunter and her to return to the Havok Marauder.
Crosshair and his team return to Kamino, where Tarkin is impressed even though they never managed to track down Gerrera. When the squad retires to its barracks, formerly the Bad Batch's quarters, Crosshair looks at the marks that Crusher made on the walls, and the different items which remind him of his former teammates.
Elsewhere in the city, Lama Su and Nala Se discuss Rampart's conscription program, and how to retain the power that Kamino has held they need a new genetic source better than the degrading pattern of Jango Fett, and that the clones they need will not return willingly. Lama Su replies they are Kaminoan property, and they only need one.
A repaired Havok Marauder heads back into space, and Crusher reveals that while they were away he has prepared Omega her own space aboard the ship, and she happily settles down, saying she's never had her own room before.

High Points : The storyline with the Bad Batch is kind of treading water, they crash, lose a part, and get it back, nothing much interesting happening here. However Crosshairs storyline is far more interesting, with the chip making him loyal to the Empire, but the attitude displayed towards him only showing disrespect. The Empire itself treats him as property, and his new squad mates treat him as a failed relic of the Clone Wars, not even treating him as human.

The most interesting parts of what happen to the Bad Batch themselves is mainly the discussion of the control chips, and seems to be laying down many plot points for the future. They are clear that Crosshairs betrayal isn't his fault, and they express they aren't happy about leaving a man behind. Which possibly is setting up a planned rescue and removal of Crosshairs chip to bring him back into the team.
Also the headache that Wrecker complains of after the crash, could it be his chip beginning to work, or perhaps malfunctioning after taking damage. Could the comedy strong character perhaps going to be the actual villain of the series?

Low Points : The main plot is fairly pointless, and pretty stupid. Why does a creature which apparently feeds on power, not eat the capacitor? Why take it for food, but then get distracted by a far less powerful torch? It's kind of like distracting a Lion from it's prey by throwing it a ham sandwich.

The team realises that Omega has no place aboard since it's a military vessel equipped only for the squad. But why not just use Crosshairs bunk? They've got one man missing and one kid extra, but can't seem to find a place for her to sleep when everyone else has somewhere. Just let her use his bunk. . .

And there's a couple of things when working outside on the unknown moon, Echo and Tech use breath masks as the atmosphere is toxic, which is fine, but when they're hunting for the Ordo Moon Dragon they all wear breath masks.
But why?
The Bad Batch are soldiers, soldiers with helmets, helmets with gas filters! Going out to fight a monster and not bothering to put their armour on just seems stupid.
Also I have a question about Echo. When exploring for the creature which has been chewing on their ship, Echo uses a torch to look around. But what happens if that creature attacks? Because Echo only has one hand (the other is replaced by a data probe), so he can't hold the torch and a blaster at the same time. Now to me it'd make more sense if his torch was strapped to his blaster, allowing him to shoot anything he shines it on, or maybe wear a headmounted light, but nope, they gave him a torch and decided job done.

So what do you really think ? : Better than the last episode, but only by a bit, and mainly because it's possibly setting up some interesting story telling for later on. The developing plot with the Kaminoans, and with Crosshair are interesting. But Tarkin isn't being especially effective here, and the Bad Batch themselves are the least interesting element of the story.

Final Words : The Bad Batch is still setting off on a higher standard than any of the other Star Wars Animated series which have been released, and while it's failing to reach the high standards of the pilot episode, I'm definitely engaged and want to find out what happens next.