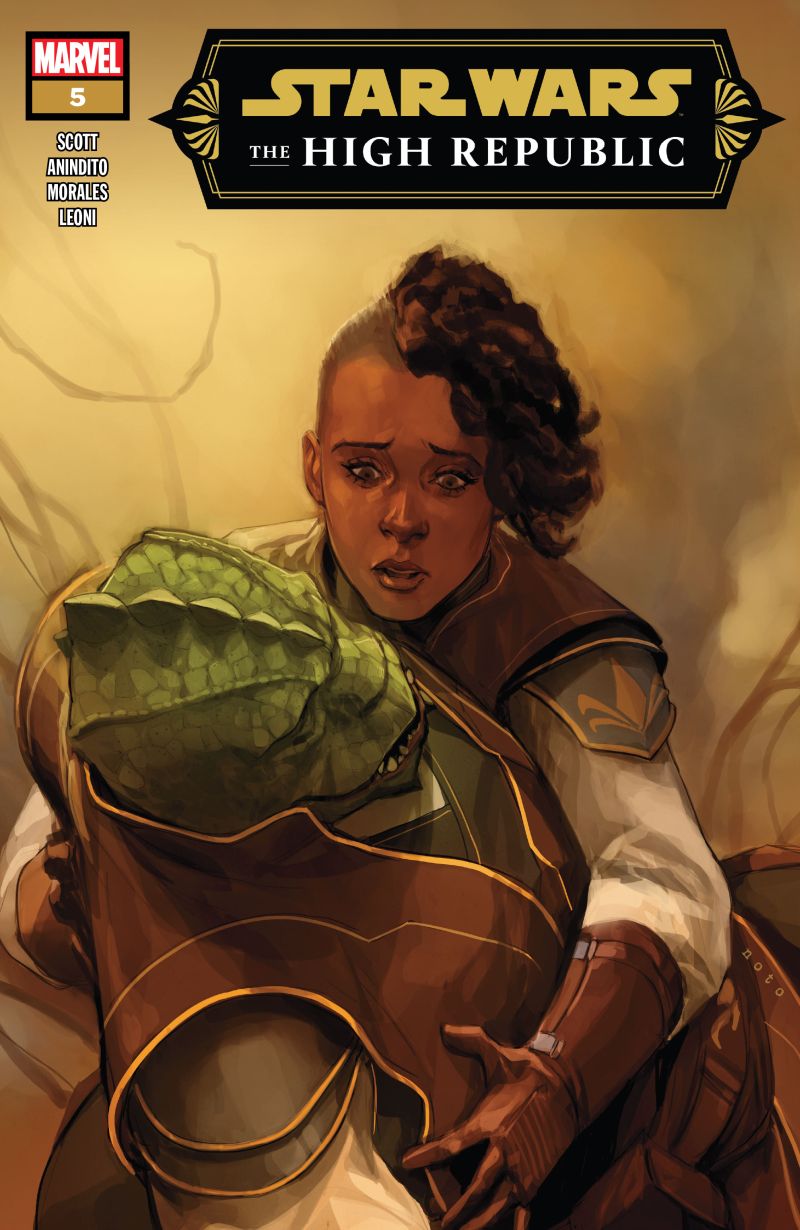 What is it ? : We begin having skipped forwards a little from the end of the last issue, Keeve Trennis is deflecting a storm of blaster bolts from hitting the villagers, when Ceret offers to hold back a Rancor to let them get away, only to get stomped into the ground by its massive foot.
Flashing back to the Hutt forces arriving on Sedri Minor, the Hutts ask the Jedi to leave, thanking them but explaining they have a contract with the colonists so will take over the protective duties. Sskeer is angered that Jedi Marshal Avar Kriss is negotiating with them, and this momentary deviation from the light side which is controlling the Drengir within his body allows it to lash out at the Hutt, making them think the Jedi are attacking.
Jumping back to the later time perdiod, vast quantities of troops are pouring out of the Hutt transports, and Avar Kriss calls the Starlight Beacon for reinforcements, only to discover that they are also under attack from the Drengir and are unable to help.
Ceret is now in the Rancors mouth, using his force enhanced strength to hold back its massive jaws, when Terec arrives wielding both their lightsabers and rescues Ceret, passing him his lightsaber, and the two leap back into combat promising to never be separated again.
Avar Kriss thinks they can stop the battle if they can free the Hutt from Sskeer, and Keeve begins trying to convince him to turn back to the lightside, but the Hutt tells her the effort is useless as Sskeer is obviously infected, but Keeve refuses to give up, connecting two lightsabers together to form a double bladed lightsaber and severing Sskeers arm which is made from Drengir tendrils. Sskeer continues to speak as a Drengir, and tells Keeve that the roots will just grow back and severing them made no difference.
Meanwhile, Kalo Sulman, the leader of the settlement is gathering valuables and planning on fleeing the planet when he is cornered by the villagers, the villagers blame him for contacting the Hutts, for not calling the Jedi, for stealing their money, and for being responsible for the deaths of their children and begin to beat him, although he slips away as a Rancor smashes through the wall.
Sskeer is attacking Keeve under influence from the Drengir, but Keeves faith in her master brings him to his senses for a while, and he explains that he'll not be able to hold the Drengir off forever, that his Force powers have been weakening even before they came here, which is why he didn't detect the swarm that attacked Shuraden during Keeves Jedi trials, and didn't detect the dark side here on Sedri Minor. Keeve wonders why he never told her, but the loss made him ashamed, that he was somehow failing his student. He explains that even if the combined Jedi and Hutt forces defeat the Drengir, all it needs is one seed or root to survive for them to grow back, but there is one way to stop them, one last chance for survival.
The Hutt leader, Myarga the Hutt, and Avar Kriss are fighting as the Hutt still has taken offense at being attacked, but Kriss gets the Starlight Beason to play the distress calls from Drengir attacks across the sector including Nal Hutta, and Myarga realises that his forces cannot defeat the Drengir alone, so orders them to fight alongside the Jedi.
Sskeer tells Keeve that the Drengir are a hive mind, so the roots within him communicate with all Drengir, so together they can use their combined strength to convince the Drengir that all the meat is spoiled and poisonous. They work together, and place the command into the Drengir hive mind, and across the galaxy the Drengir cease their attacks, fleeing from what they now see as poisoned, spoiled and therefore useless meat, no longer spurred on by their hunger to attack.
Avar Kriss and Myarga wonder what happened as the messages come in from across the sector that the attacks have stopped and the Drengir are in retreat, meanwhile Sskeer has collapsed with blood flowing from his mouth and nose, while Keeve holds his body saying that this wasn't part of the plan. . . .

High Points : I had hoped that the Hutts and Jedi would work together, and they do, although it takes a while and is probably already over as the Drengir attack has ceased. But the best point of this issue is the inventive way that Keeve and Sskeer stop the Drengir attack. Realising that the Drengir are only one mind, they mind trick the parts within Sskeer with just an instinctive revulsion for spoiled meat which will poison them.
I assume that this is only a temporary solution, as the Drengir will realise they were tricked eventually, but is a great way of dealing with such an immense threat as the Drengir have proven to be. And is actually a far more Jedi way of dealing with a threat than the Jedi normally use (hitting things with their Lightsabers being their usual peaceful method). The High Republic keeps surprising me, by sticking to the ethos of the Jedi far better than I've ever seen before.

I was also impressed, that they managed to fit in the villagers lashing out against Kalo Sulman, their leader, but a leader who has treated them like slaves. So it's good to see them dealing with him as he cowardly tries to flee the chaos he himself partially caused.

Low Points : Not a low point yet, but I'll be so annoyed if the seeming death of Sskeer is another fake out, we're only 5 issues in, and we already had a fake out attack on him as the cliff-hanger at the end of the first issue. Now my assumption is that the Drengir had taken over his body, and now they have fled his body is unable to support itself.
Not that I have anything against Sskeer, as his situation has the potential of being a very interesting one to see play out, a Jedi learning to manage without his powers. We had Ulic Quel-Droma who had his powers stripped from him by Nomi Sunrider, but we've never seen a Jedi coping with a more natural loss of power before. Plus the cause of the loss itself could provide some interesting plot lines, so it'll be sad to see Sskeer go, but I've a bad feeling that it's going to be another fake out.

So what do you really think ? : The High Republic continues to impress, I would have liked to have seen Keeve's "ability" to connect to seemingly useless and powerless beings which turn out to help serve some purpose within the story. If Keeve found help where others didn't even perceive that help could come from would be an interesting to see continue.

Final Words : When I began to read this series, I didn't expect much, thinking that it would turn out to be another Disney blunder, creating a time period no one really asked for, based on so many woke ideas. But it's proving to have some great ideas, and to in some ways show the ideal version of the Jedi, before they were so stuck in their ways and on the edge of collapse during the prequel movies.
There's a seperate IDW series of comics also based in the High Republic era, and I'm wondering if I should begin to pick that one up too.