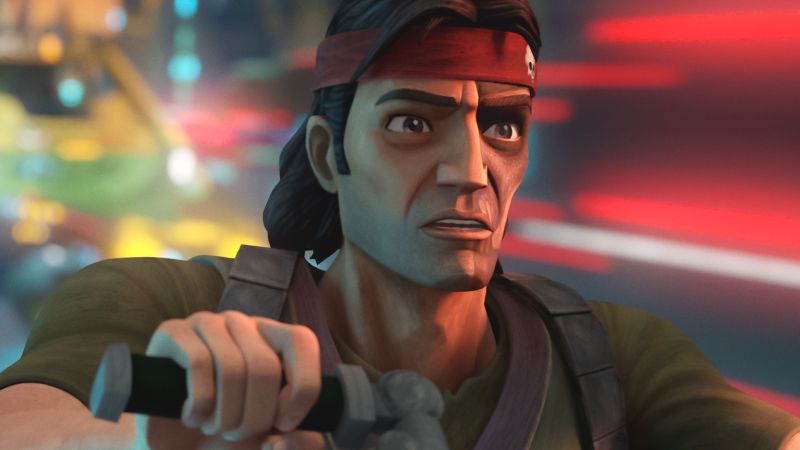 What is it ? : The Bad Batch decide to go to Idaflor, an uninhabited world where they can hide out until things calm down, but Tech points out they can't get there without resupply. While they were in the Republic they received supplies as they needed them, but the Havoc Marauder is nearly out of fuel and they had no rations left.
They decide to go to the nearby world of Pantora and sell some of their military equipment but as they arrive Echo warns them that the Havok Marauder is on the wanted list, so Tech suggests scrambling their signature.
Landing they bribe the dockmaster to not scan their ship in, although he instantly goes and contacts a masked female bounty hunter who is searching for them. Hunter, Echo and Omega head into the city with whatever they can afford to sell, and they see a parade celebrating the end of the Clone Wars, plus more advertising for the Chain Codes which are replacing Republic Credits. While Wrecker and Tech dismantle the ships engine to get to the signature code.
To avoid being recognised, Echo is wearing a droid like set of armour, and Hunter is in civilian clothes, and they reach a trader where they try to sell of their equipment, but he refuses as it's obviously military, and therefore only good for selling on the black market. But he spots Echo who he thinks is a droid and makes an offer. Hunter agrees to sell Echo, telling Echo to play along, but leave when they are clear.
As they do business, Omega wanders off, and when she realises she is lost, she is contacted by the female bounty hunter who has tracked them down, as Omega is her target, not the others. Unmasked it is revealed that the bounty hunter is Fennec Shand.
Hunter realises that Omega is missing, and tracks her down, but this starts a running fight between Hunter and Fennec, Wrecker leaves the hangar to help, and when Echo realises that the Havok Marauder is in no condition to leave quickly due to the work which is going on, he removes the restraining bolts of the droids he has been stored with, and takes them back to the ship to help replace the engine.
After a running battle through the streets including a chase on a stolen speeder bike, Hunter rescues Omega and heads back to the ship, and off into space.
Meanwhile Shand meets with the dockmaster and tells him to let her know if they return, while swearing to track them down.

High Points : While the episode really isn't the greatest, I am enjoying the time period, and the ongoing celebrations as the people of the galaxy are happy at the end of the Clone Wars, and therefore think that the newly announced Galactic Empire is a good thing as it has brought peace to the galaxy.
This is a solid idea, and brings a lot of reality to the Star Wars universe, as although as a viewer we know the Empire is the bad guys, it's difficult to explain why, as although it's completely built on a lie, it is in fact bringing stability and prosperity to much of the galaxy.

I also liked that the Bad Batch knew their military equipment was valuable, so could be sold off, but that doesn't work out, as selling weapons is definitely black market kind of shenanigans. Something that the clones are not aware of, as having access to this stuff is just part of their lives, and the idea that it might be restricted doesn't occur to them.

Low Points : The episode features one of my most hated things that Star Wars is doing right now, and one of the things I suspected it would do. Bringing old characters back again and again.
We had Kanan in the first episode along with Tarkin (but Tarkin turns up in everything, so is hardly worth mentioning), then we had Cut show up in the second episode, and now Fennec Shand. In the galaxy far far away, Coruscant itself is supposed to have a population of over a Trillion, never mind the thousands of other populated worlds. But the same few dozen of characters just keep on turning up again and again, lets see some new interesting characters so the Bad Batch can make it's own cast.
That said, the one time I'll let them off is if they bring Hondo Ohnaka back, although just give him his own series to make me really happy.

The Bad Batch have basically been portrayed as Clone Superheroes in past episodes, but here their abilities seem to be lost. Hunter who can track someone anywhere on a planet manages to lose track of Omega and has difficulty tracking her down? Wrecker who can throw vehicles around, knocks his head and collapses unconscious.
While the superpowers I can see as being problematic to good storytelling, it's a bit late for that, and after only four episodes it appears to be something the writers should have thought of earlier.

So what do you really think ? : Not a lot happens in this episode to the main plot, and the storyline within the episode isn't that great either, having the real feeling of filler (problem never mentioned before means they need to do something, so they do that thing).
I'm also slightly bothered by the way they handle disguising the Havok Marauders signature, as in the RPG Transponder codes were used, where each ship has to have an ID code, and replacing it involves getting a code from a similar ship, or getting one from the Bureau of Ships and Services database. This could have led to an interesting episode as they have to get access to the database, without letting anyone know they are there, as that would let them know the database was breached, perhaps by targeting something else to cover the real reason for their raid.
Crosshair knowing their techniques could have later realised the reason for the raid, allowing him to obtain their ships new identity and track them down.
This kind of thing was fairly standard in the Star Wars RPG, so players could ensure stolen or identified ships were safe to use.

Final Words : Bad Batch is settling into a routine already, and it's not a good one, with the characters at this point being mainly witnesses to the interesting stuff going on in the galaxy around them, making the episodes fairly uninteresting and the Batch themselves seem pretty ineffectual.