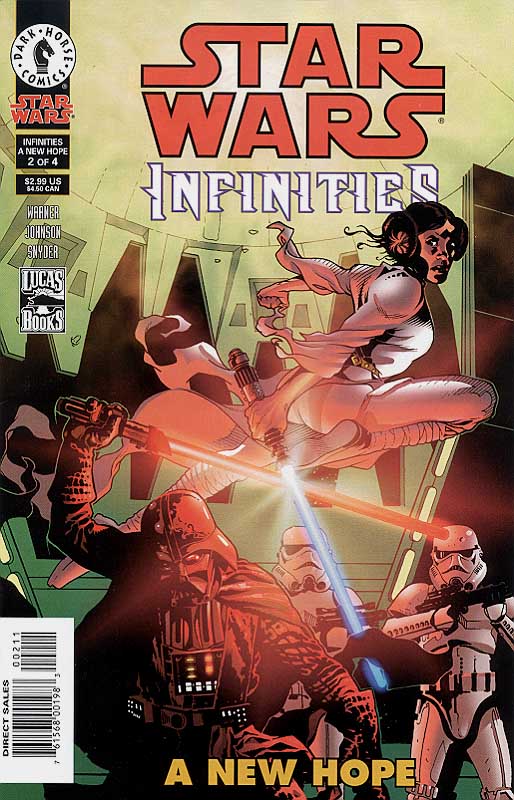 What is it ? : The Millennium Falcon sits in space waiting for Luke to rendezvous with it, and he arrives in his crippled X-Wing, Artoo having been damaged during the Death Star trench run, and he boards the Falcon. Chewbacca takes Artoo for repairs, and Luke thinks that the droid will be vital to any further action against the Death Star.
But Han tells him it's over, the Rebellion has been defeated, Luke gets into a rage about it attacking Han, but Obi-Wan appears to him, calming him and telling him to go to Dagobah and meet with Yoda.
Meanwhile the victorious Death Star arrives in orbit around Coruscant, and Vader takes the captive Leia to see Emperor Palpatine in his throne room in the old Jedi Council chamber within the Jedi Temple. There Palpatine tells her that instead of killing her, she is going to be kept like a pet, although obviously she'll need some obedience training.
Arriving at Dagobah, Han and Luke are met by Yoda who pretends as he did in Empire Strikes Back to be a guide, but Han sees through the deception instantly and Yoda warns Luke that unless he begins training he has already taken steps down the path to the Dark Side which will consume his destiny.
Meanwhile on Coruscant, Vader visits a black clad Leia, giving her C-3PO, and allowing her a chance to lash out, giving her a glimpse at the power the Dark Side offers her.
Luke trains with Yoda, much as he did in The Empire Strikes Back, training for some months, before Han declares that he must leave to get parts to repair the Falcon, and Luke and he separate with a promise that when Luke needs transport, Han will be there, and as Chewbacca returns a repairs R2-D2 to him.
On Coruscant, Vader once again visits Leia, revealing that the Emperor is dying, and that the Empire was forged in War, but he thinks now is the time for someone to take control who doesn't just dream of power, but has a more noble destiny, telling her she has more options than she knows.
Back on Dagobah, Luke encounters the Dark Side cave, entering it and fighting Vader as he did in the Movies, however when he defeats him, the helmet cracks to reveal Leia's face instead of his own. . . .


High Points : As the timelines diverge, we begin to see alternate takes on scenes, and some of them are quite brilliant, for example Han recognising Yoda as the conman that he is, the reveal of Leia as the new potential Vader in the Dark Side cave. But the addition of Vader's seduction of Leia to the Dark Side is quite brilliant, offering her power, but enticing her with a promise that it will be to change the Empire into something better is quite brilliant.
While it would have been easy for the writers just to use Leia's anger to turn her, after all she's pretty feisty and angry at the best of times, but instead twisting her sense of service and her hopes and dreams for a better galaxy is sinister indeed and makes for far better story telling.

Low Points : While the story is already seducing Leia to the Dark Side, the moments of Luke lashing out against Han seems extraneous and fairly pointless, unless the story plans on the Twins actually ruling the galaxy together.
With this section focusing on Luke and Leia, Han is kind of twiddling his thumbs, and I would have liked him to take a more active role in Luke`s training, providing a unique input very different to Yoda's, rather than just replaying the movie as it does play out in the story.

So what do you really think ? : There's some interesting stuff going on, but the story just keeps dragging us back to things we've seen before, whereas it was advertises itself as being a totally diverging story based on just one small decision.
It'll be interesting to see how it goes, but I'll be very disappointed if it just comes down to Luke fighting Vader and the Emperor on the Death Star, but Vader turns out to be Leia instead.

Final Words : So Leia is being seduced to the Dark Side, Luke is being trained by Yoda, and Han is off trying to return to his old normal life, I've a feeling we're going to see events from Return of the Jedi start to come into the story next issue, with perhaps the Bounty Hunters or Jabba cropping up, but we shall see how it plays out.