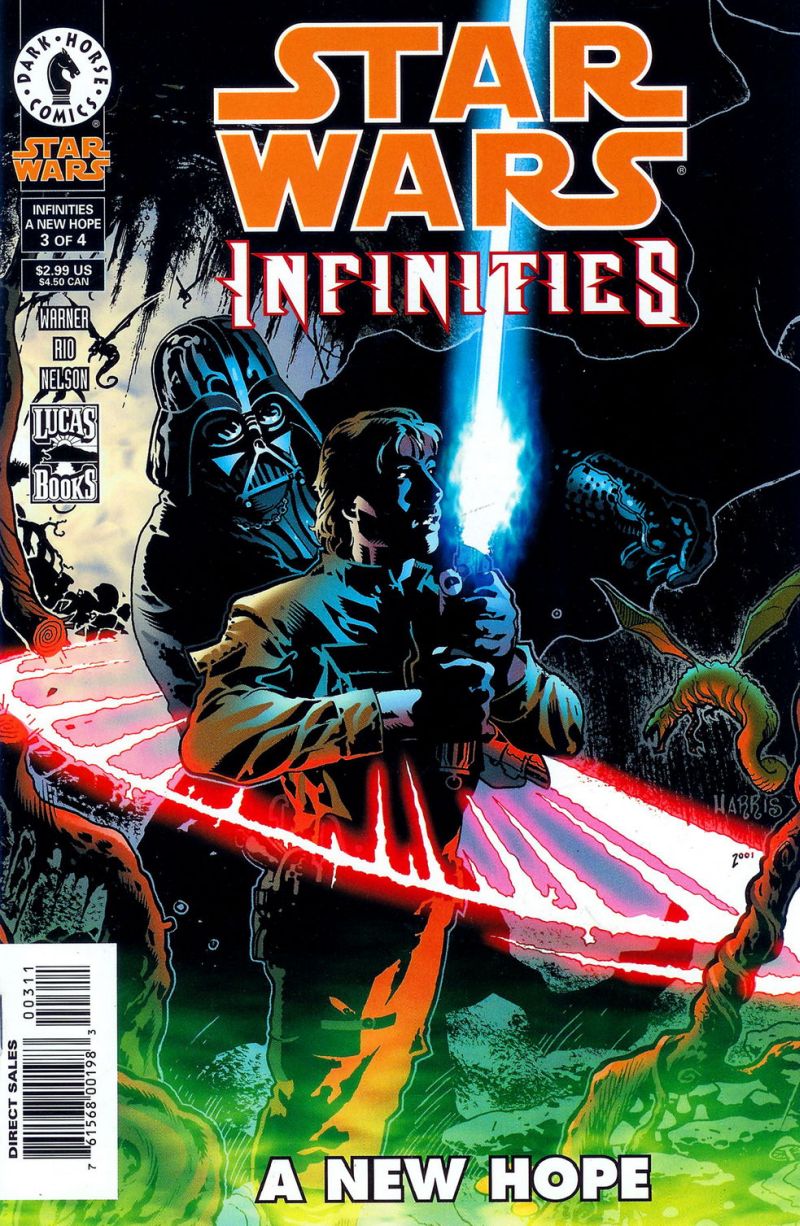 What is it ? : Five years have passed, and Han and Chewie are in a Cantina on Ord Mantell, on a viewscreen comes the celebrations from Coruscant of the anniversary of the end of the Rebellion. The Empire has reformed the Senate as a symbol of the healing of the wounds of war, and the new Senator for Coruscant, Leia Organa, speaks of her regrets at having worked against the Empire.
Han gets angry and smashes the viewscreen, but this draws attention of various denizens of the Cantina, who recognise him as having a bounty on his head from Jabba the Hutt. He races through the streets back to the Falcon, pursued by Stormtroopers and Bounty Hunters, blasting off into space, where a Star Destroyer launches Tie Fighters to capture the fleeing ship.
Making the jump to Hyperspace, Han heads for the only place he knows for certain he'll be safe, Dagobah.
On Dagobah, Luke is a calmer more serene figure, dressed in his black Return of the Jedi outfit, he demonstrates to Yoda his power and Yoda congratulates him on his control and patience. Heading back into the Dark Side Cave, he hands Yoda his lightsaber, but Yoda warns him that the saber isn't his only weapon, and he should ensure he leaves those behind as well.
He confronts Vader again, avoiding the Dark Lords attacks, and has visions of Palpatine, Qui-Gon Jinn, a young Obi-Wan, Shmi Skywalker, a young Anakin Skywalker, Darth Maul, Padme Amidala and Leia Organa, seeing glimpses of their stories.
But as he exits he encounters Han who has arrived and passes on the news that Leia is alive, and working, probably against her will, with the Empire. So they decide to go to Coruscant to rescue her. Yoda takes Luke to one side, saying that while he has trained quicker than any student Yoda has had before, Luke is not ready because he doesn't know the truth. So Yoda explains to him how Vader is his Father, and how the same fear and anger which led him to the Dark Side exist within Luke.
He also tells him that Leia is his sister, and Obi-Wan appears explaining that the loss of Alderaan has created great loss and anger which put her in danger of falling to the Dark Side. They tell Luke that Palpatine has always intended this since he learnt of their existence, to replace the wounded and aging Vader with one of his children.
As they board the Falcon, Yoda tells Han that he owes him for the food he has eaten on Dagobah, and the cost is a trip on the Falcon with them, as he has fond memories of his time on Coruscant and it has been a long time since he sat in the Temple of the Jedi.
Meanwhile the Empire is announcing that Coruscant will cease to be the throneworld of the Empire, that the Throne will be moved to the newly renamed Justice Star and travel among the worlds of the Empire, making them all equal. Vader tells Leia that the Emperor isn't well enough to be with them, and Leia tells him that it is only right, as the future should be built by those that will live in it. She leaves on other business, and Palpatine emerges, telling Vader that her ambition has made her powerful, although Vader senses a disturbance in the Force.
As the Falcon emerges into the Coruscant system, Han tells Luke and Yoda that they can leave any time they want, but Yoda tells him that he is looking forwards to the Emperors celebrations . . . .

High Points : I really liked that Luke basically got an overview of the plot in the Dark Side cave on Dagobah, learning all the backstory to his own and giving him an understanding of what is really going on. That said, it would have made a lot more sense if this was how he discovered that Vader was his father and Leia his sister, rather than Yoda having to explain it later, and making this vital information one piece of the puzzle the cave doesn't show him.

It's only a very minor point, but I do like the rebranding of the Death Star into the "Justice Star", it's definitely one of those "Are we the baddies?" moments, as the Empire is claiming to be this newly healed and anti-war version of itself and Death Star just doesn't suit that brand.

Low Points : This issue feels quite heavily like filler, as it's just putting everyone in their places for the finale, which combined by an almost complete lack of action makes quite a slow and dialogue heavy read.

So what do you really think ? : The images Luke is shown in the Dark Side cave really dates this story to its time of publishing, as it obvious came out between the release of Episodes 1 and 2. The heavy inclusion of Darth Maul and Jake Lloyds Anakin, and the total absence of Hayden Christiansen's Anakin and Count Dooku (or General Grievous), really puts on display that the authors had no idea of the importance those characters would play later.

Final Words : Well if nothing else we should have an interesting finale, with Yoda returning at Luke's side to face off against Palpatine, Vader and Dark Leia, probably aboard the newly renamed "Justice Star".

Oh, and my prediction that Jabba would feature wasn't too far off, with Han being chased by Bounty Hunters early in this issue, and now it looks as if we're going towards Luke's confrontation with Vader and Palpatine, but with Yoda and Leia being thrown into the mix this time.