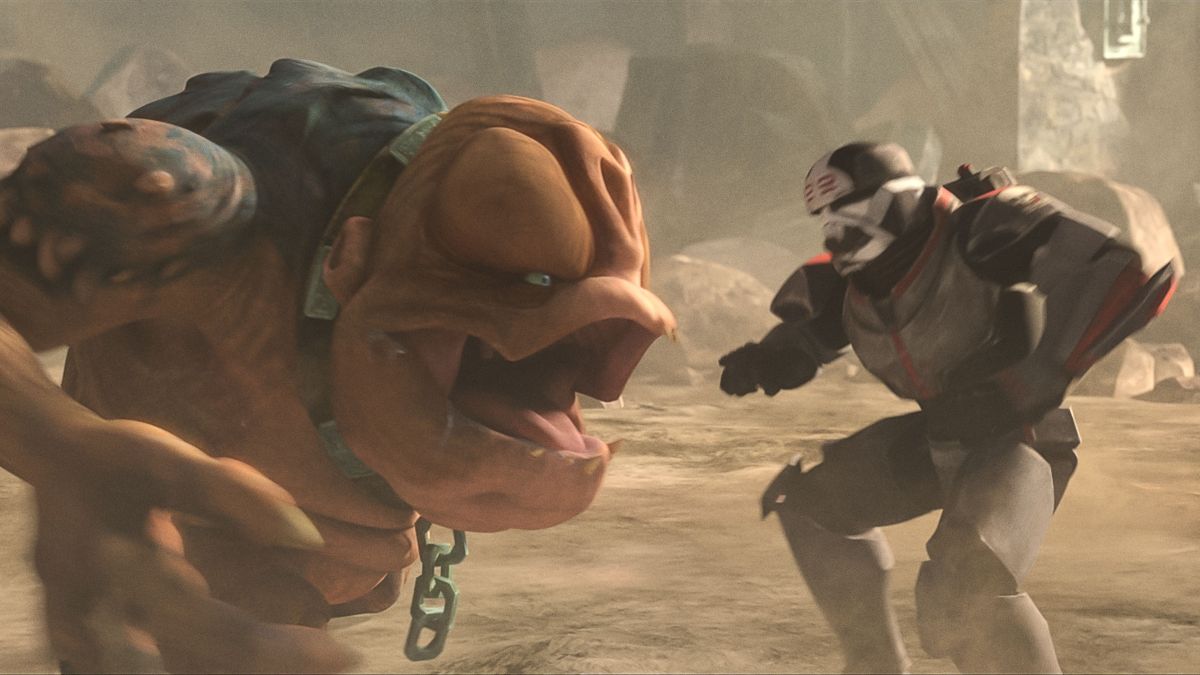 What is it ? : Wanting to identify the Bounty Hunter who is coming after Omega, the Bad Batch head for Ord Mantell, as Echo knows of a Jedi informant called Cid there. On the way they give Omega Crosshairs old commlink, which she plays with before being told it is not a toy.
Arriving at Ord Mantell, they head in full armour to the Cantina where they know she operates from, but questioning a Transdoshan female they are told that no-one has heard of Cid. As the group discusses their next action, Omega realises that the Trandoshan is herself Cid, and lets the group know through her new Commlink.
Heading into her office, Cid agrees to get them the information they want on the Bounty Hunter, in exchange for retrieving a child named Muchi who has been taken by some Zygerrian slavers.
Taking the Havok Marauder around the planet, they leave Omega aboard as they sneak up on the slavers, only to get captured and disarmed. The slavers locate the ship and search it, but Omega hides from them, following them back to their camp. She attempts a rescue, spotting a caged creature which she releases as she herself is spotted, letting a baby Rancor loose into the camp.
The Bad Batch escape from the slavers, with Hunter taking on the slaver leader, but as they try to discover which of the slaves is Muchi, they are told it is actually the Baby Rancor.
With the Slavers dealt with, they must tame the Rancor, and discover that achieving dominance is the only way to bring it under control, so Wrecker fights it in a wrestling match until they both collapse from exhaustion.
Returning the Rancor to Cid, she passes it onto her contact, Bib Fortuna, who takes it away through the streets of Ord Mantell, and she gives the Bad Batch the information they wanted, that the Bounty Hunter is Fennec Shand who has been hired directly rather than just following an open bounty, so someone is serious about getting them. She also offers to get them more work in the future if they want.

High Points : Okay it's very silly, but my favourite part was definitely Wrecker wrestling a Baby Rancor. Wrecker has been shown to have superhuman levels of strength, throwing Speeders around and lifting LAAT/i, and the Rancor is extremely young and small, so it's not as absolutely ridiculous as you would think. But it is pretty funny to see this fairly cute looking beast, still much larger than Wrecker as the two brawl for dominance.


Low Points : Okay, I just complemented the Baby Rancor, but honestly, did we ever really need an origin story for the Rancor in Jabba's Palace? And once again we've got characters from elsewhere in the franchise turning up, so we're 5 episodes in, and we've had Kanan, Saw Gerrera, AZI-345211896246498721347, Cut, Fennec Shand, Bib Fortuna and the Rancor, never mind more excusable ones such as Tarkin, and Lama Su. The Galaxy is a very small place in Star Wars these days, and yet again makes me think the entire population is around 200 people and a Baby Rancor.

So what do you really think ? : So while there remains some interesting story progression, with Wrecker suffering another ominous headache which I'll assume is his chip malfunctioning or becoming active, and Omega retrieving a Zygerrian Energy Bow, which I'll assume she's going to use rather than a blaster. There remains too many callbacks to other Star Wars movies and series, and what I kind of wanted to see from this series was more information on the early days of the Empire.
I still find myself wondering what's happening to the Separatist worlds, now they've been "defeated" in the Clone Wars, and presumably conquered by the newly formed Empire. I'd assume that their governments were arrested or executed, and these were on the whole not bad people, but the show is telling us nothing of this, instead concentrating on creating an origin story for Jabba's pet Rancor that Luke kills in Return of the Jedi.

Final Words : While heavily flawed, and a bit disappointing, this episode was far more entertaining that the last few episodes, and is the best since the pilot, being at least fun rather than overly serious. The Bad Batch continues to be watchable, but not rising to the heights of later Clone Wars, or Rebels.