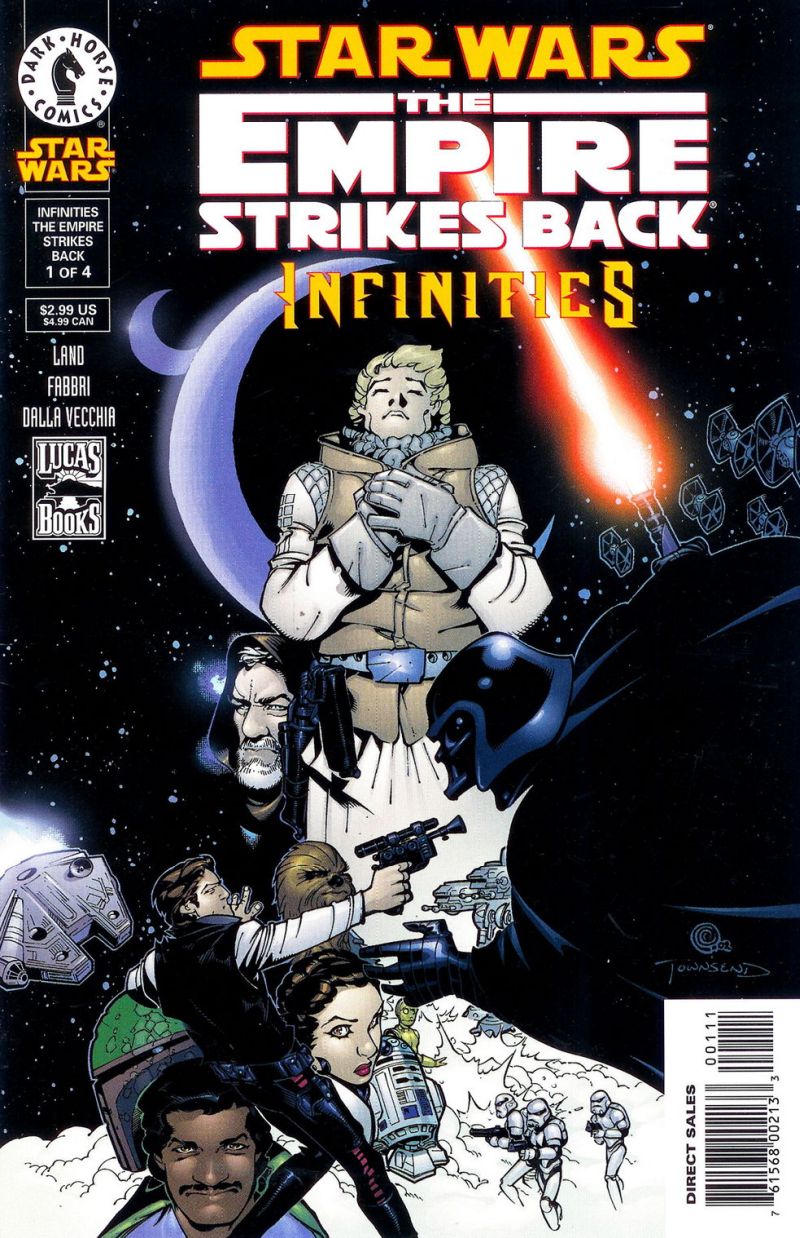 What is it ? : We start at the beginning of The Empire Strikes Back, but rapidly move through the story as the comic relies on us knowing many things which haven't changed from the original. Luke is ambushed by the Wampa, fights it and escapes into the snowy surface of Hoth, while Han takes a Tauntaun and searches for him.
Luke sees the image of Ben Kenobi telling him to go to Dagobah and become a Jedi under tutelage from Yoda, but Han's Tauntaun dies and he arrives at Luke later, to find him nearer deaths door.
Han tries to help Luke, but as he dies from the cold, Luke repeats to Han the words than Kenobi told him, "You must go to the Dagobah system.", "Find Master Yoda, train as a Jedi." which Han takes as instructions to him.
The next morning as he is rescued, and they have a funeral for Luke, Han tells Leia that Luke told him he is to become a Jedi and must train with Yoda on Dagobah, when they come under attack from Tie Fighters as the Imperial Assault on Hoth begins.
Snowspeeder defend as they evacuate, and as the base falls and Vader and Snowtroopers enter, Han takes Leia aboard the Millennium Falcon and flee into space. However instead of heading into the Asteroid field, he tries the ramming maneuverer, docking to the Star Destroyer while they are flinching, and hiding from their sensors much as they do in the movie. And as they undock when the Destroyer goes to Hyperspace they are followed to Bespin by Boba Fett as they head there for repairs.
Arriving at Cloud City, Lando acts outraged at Han's arrival, but greets him warmly, but laughs in his face at the idea of Han becoming a Jedi, only to be scolded by Leia who says that Han may be the Rebellions last hope. Lando makes his excuses as he tells them he has another guest, heading into a meeting with unhelmeted and obvious clone of Jango, Boba Fett.

High Points : I really do like the idea of a delirious Luke repeating the words of Obi-Wan, and Han misunderstanding it as instructions to him to go to Yoda and train as a Jedi. Although pretty obviously this is going to fall down when they reach Yoda, who will recognise Leia as the force sensitive that she is.
That said, I'll be interested to see how it plays out with Han being frozen in Carbonite and taken to Jabba, as without Luke that could be very different and interesting.

Low Points : I'm not a fan of the way it skips through Empire Strikes Back changing certain elements, but not showing us others which are playing out the same, for example the issue ends with Boba Fett, and we saw Slave 1 trailing the Millennium Falcon from Hoth, but we never saw Vader hiring the bounty hunters. So if we hadn't seen Slave 1 following them from the Imperial fleet, I would actually have assumed he was working for Jabba rather than Vader, and I'm not a fan of having to pick up context from very subtle clues.

I'm also not a fan of Fett having his helmet off at the end of the issue, he's got one of the most famous faces in the Galaxy, so wouldn't really want everyone to know he's just a Jango clone, letting them think instead that he's his son. While there's nothing massively wrong about it, it just feels wrong to me.

So what do you really think ? : So much of the issue is just retelling the story with the minor alteration of Luke dying, and there's nothing really different or interesting here. I suppose it can be setting things up for the issues to come, but it's starting to feel like these stories aren't taking Star Wars off in new directions based on the single point of change, but rather just remixing the movies with this slight change.

Final Words : When I decided to cover the Infinities stories I thought that they would be interesting variants on the classic stories with some new and interesting content for the site. But they still so close to the original stories that mainly they're just a retelling as the same characters end up visiting the same places and doing the same things.
While in this story Han thinking he's going to be a Jedi is interesting, I foresee that by the end of the next issue, Leia will be training with Yoda instead of Luke, and that Vader will offer her a chance to rule the galaxy at his side. The same story, just remixed a little, perhaps a lesson on fate and destiny in the Star Wars universe, that the Force always makes sure things come to pass.