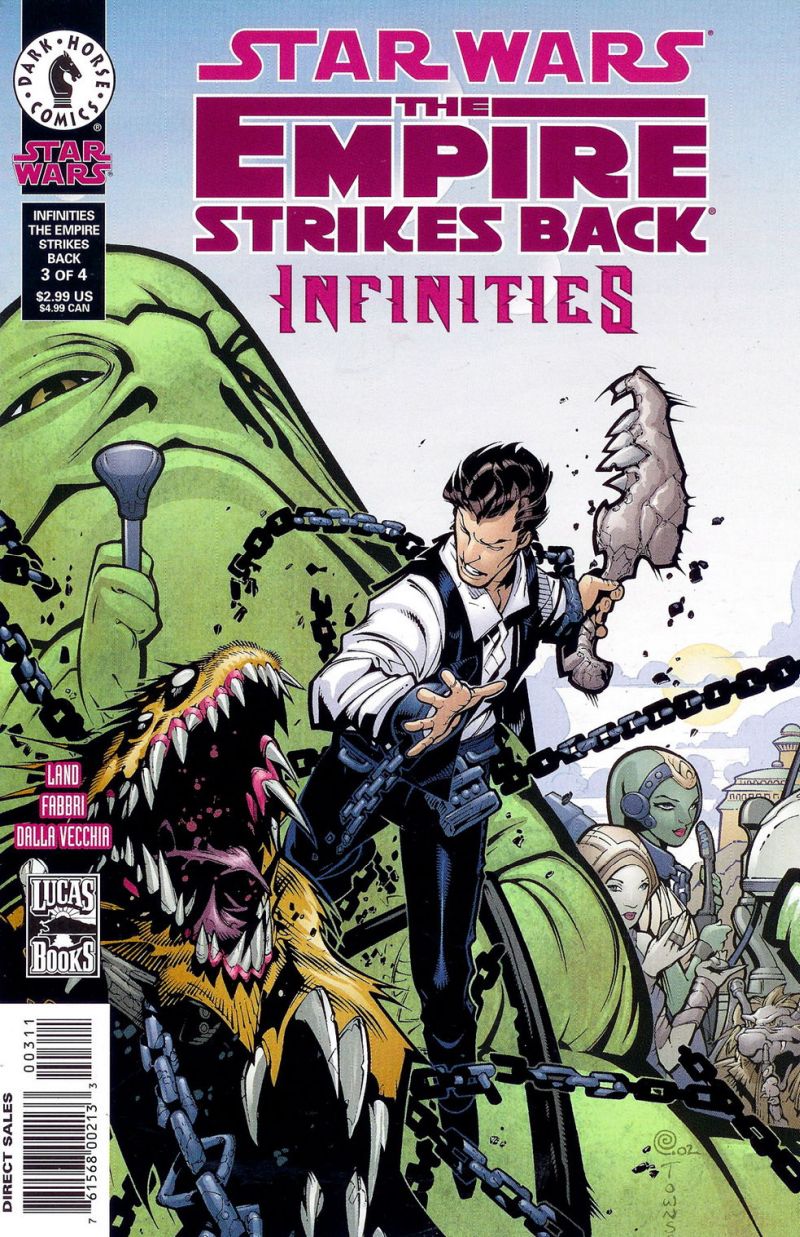 What is it ? : Many months pass, and Leia trains on Dagobah with Yoda, who complements her for being the fastest student he ever trained. Meanwhile Vader is still searching for Luke, and when an Imperial officer mentions rumours that Luke was killed on Dagobah, Vader refuses to accept it, as he still senses the growing power of his offspring.
On Tatooine, Han meets with a contact who'll take his payment to Jabba to get rid of the death mark that has been issued for him, but the contact sells him out and Han, Chewbacca, R2-D2 and C-3PO are captured and taken to Jabba. Han offers Jabba his payment, but it is refused saying that it is too late and Han must be punished, and Jabba drops him into the cave beneath his throne room.
But instead of a Rancor, there are a pair of Nexu which Han fights, but R2 unlocks the doors, allowing Han and Chewbacca to escape and the Nexu to enter the Throne room. Han, R2 and Chewbacca steal a transport ship to escape, but R2 makes a sad noise as he realises they left C-3PO behind.
The next morning, Vader arrives at Jabba's palace looking for Han, Jabba tells him what happened, but Vader notices C-3PO, and demands to be given him, to which Jabba agrees.
Aboard the Executor, Vader questions 3PO, asking him if he remembers who built him, which 3PO explains was lost long ago, so Vader asks where Skywalker is, to which 3PO explains he cannot tell as he cannot betray his master or colleagues. So Vader dismantles 3PO, extracting the data from the droid he once built, before ordering a shuttle to take him to Dagobah. . . .

High Points : Although it's only a minor point, I do like the idea of C-3PO meeting Vader, the man who as a child built the droid as a friend. I really would have liked for them to explore the relationship more, the fussy yet obedient droid back in service of the boy turned Sith Lord. It would have been satisfying to see the powerful Dark Lord of the Sith, with a prissy robotic butler, but what we get is reasonable if not all I wanted.

I also liked the way that Han blunders his way through the encounter with Jabba, escaping through luck in a very Han Solo kind of way, rather than having any kind of plan. I also enjoyed the encounter between Jabba and Vader afterwards, with Jabba submitting to the Dark Lord, and surviving the encounter having not given up anything of value, only to return to discussing getting a Rancor instead of the Nexu as it will be easier to control.

Low Points : Speaking of the Nexu, why are they there. This is supposed to be the same universe just with a single minor change, yet I see no connection between Luke's death and Jabba owning a Rancor. How are these things connected, especially as we now know Jabba had the Rancor for many years before Return of the Jedi?

I'm also not a massive fan of the complements that Yoda throws at Leia, I appreciated last issue that he treats her totally differently than he treated Luke in the main timeline. That he doesn't try to trick her, and is far more honest with the truth. But why should Leia be a better student than any before, he never offered any such complements to Luke, and surely the two as twins should be equally powerful. And apparently Leia is better than Anakin was, as the Chosen One himself had a bad attitude.

So what do you really think ? : I enjoyed this issue, as it took the problems facing the storyline, Han trying to clear his death mark, Vader searching for his offspring who he can feel getting more powerful, and Leia training under Yoda. Yet it approached them all in a different way to the original movies, which seems to be exactly what this series is all about, although it's a pity it's taken half the series to get to this point.

Final Words : So one more issue of The Empire Strikes Back to go, before we move onto Return of the Jedi, and I have to admit I'm not sure how this one will end up. I don't want to see all powerful Yoda again, but there doesn't look to be a clear path to Leia facing off against Palpatine to save the Galaxy. I guess I'll just have to wait to see.