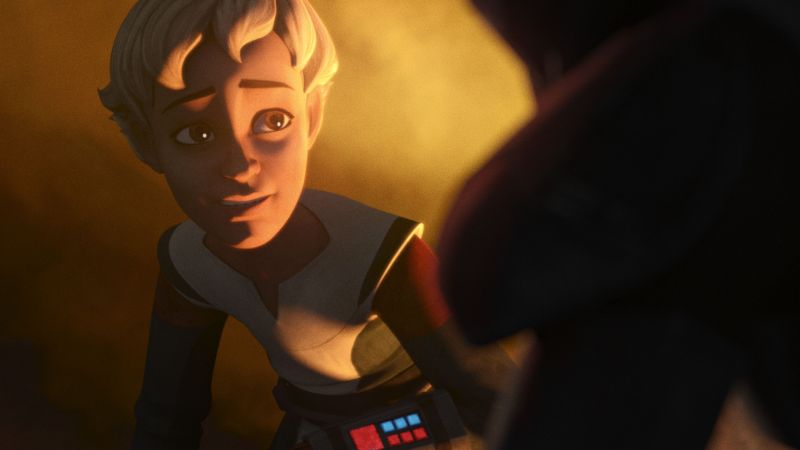 What is it ? : Omega is training in the bar with her energy bow, shooting at the side of an old arcade cabinet, while the rest of the Bad Batch offer advice and two of the patrons bet on her chance to hit or miss.
Then Cid enters with work for them, she wants a CIS Tactical Droid recovered from a decommissioning facility on Corellia, as the information on how to fight the Clone Troopers now working for the Empire is at a premium. Hunter tells her that they haven't decided if they're going to work for her, but she says that it's mutually beneficial, as they need someone in the underworld to protect them.
Heading to Corellia, they break into the facility and locate the droid, but as they spot its head, it is stolen by one of the workers. They intercept the worker only for it to be revealed it is Trace Martez, and her sister Rafa is also present.
The struggle between the two groups is noticed and alarms set off summoning Police Droids, so the two groups must work together, with Trace saving Omega when she falls onto a pile of scrap as it is being smelted down.
Scrapper collapses with head pain, only recovering to help protect the group while Tech and Trace modify the droid head to reactivate the CIS droids in the facility, starting a battle between the two groups of droids and allowing them to slip out to the Martez's ship.
As they fly away, they comment that Cid's buyer won't be happy, and the Martez sisters comment that they don't even know who they were providing the head to, whereas they were getting it for someone who was going to use the data against the Empire.
As they board the Havok Marauder, Hunter gives Rafa a data rod that Tech made of the droids memory while they were modifying it, and she comments that these clones do seem different from the others. As they depart, the Martez sisters contact someone who they tell about a group of rogue clones, and where to find them. . .

High Points : It's kind of cool to see the Battle droids back from Clone Wars, I was amused at one of them acting surprised to be helping Clone Troopers, but saying "oh well, orders are orders". But more than that the droids which activate are in a state of disassembly, with Battle droids with missing arms and legs hopping and lurching their way into battle, almost zombie like. Which might be on purpose as they are indeed a dead army.

The show also offers up what in my opinion is the best joke they've ever told, with Rafa repeatedly repeating Trace's suggestions, until Trace exasperatedly asks "Is there an echo in here?", to which Echo helpfully pops up and says "Yes, can I help?". So obvious, but really worth it.

Low Points : Again we've got returning characters, and I could definitely have lived without seeing the Martez sisters again. While I don't think I was as critical of their episodes as many were, they didn't really add much to the story, and it just seems to be so it can lead to Ahsoka turning up in the series, as another returning character.

The ending also seems to suggest that the Bad Batch are going to end up working for the Rebellion during its infancy, which is really something I don't need. The idea of these soldiers now working as mercenaries is quite interesting, and the relationship with Cid looks like it could be one of the best things in the show (having a team of crack Clone Troopers working for her is a real asset, and she seems able to help them, so its mutually beneficial). But them just ending up as more Rebels, with Bail Organa probably showing up again, just doesn't interest me as we've seen that done already.

So what do you really think ? : A fairly interesting episode, with some fun parts, but we're now 6 guest appearances in 6 episodes, with another teased at the end of the episode, I'm really tired of it.

Final Words : The Bad Batch really has an opportunity to show us things we've never seen before, and that's where I think the strength of the show could be, as the Empire rises and we're 16 or so years away from the Rebellion having any serious effect on the galaxy, so the underworld is really the only place for the Bad Batch to hide. So a story of these highly trained and modified Clone Troopers making their way in the underworld of the galaxy which they don't really understand could be really interesting. Especially if Crosshair is brought back and really becomes the antagonist of the show as he helps train the first Stormtroopers into any kind of effective force.
But I seriously concerned they want to change it just into another Rebels (which I loved, but we've seen), or worse, another Resistance (working for Cid as cover for their Rebel activities sounds really close to Kazuda's story to me).