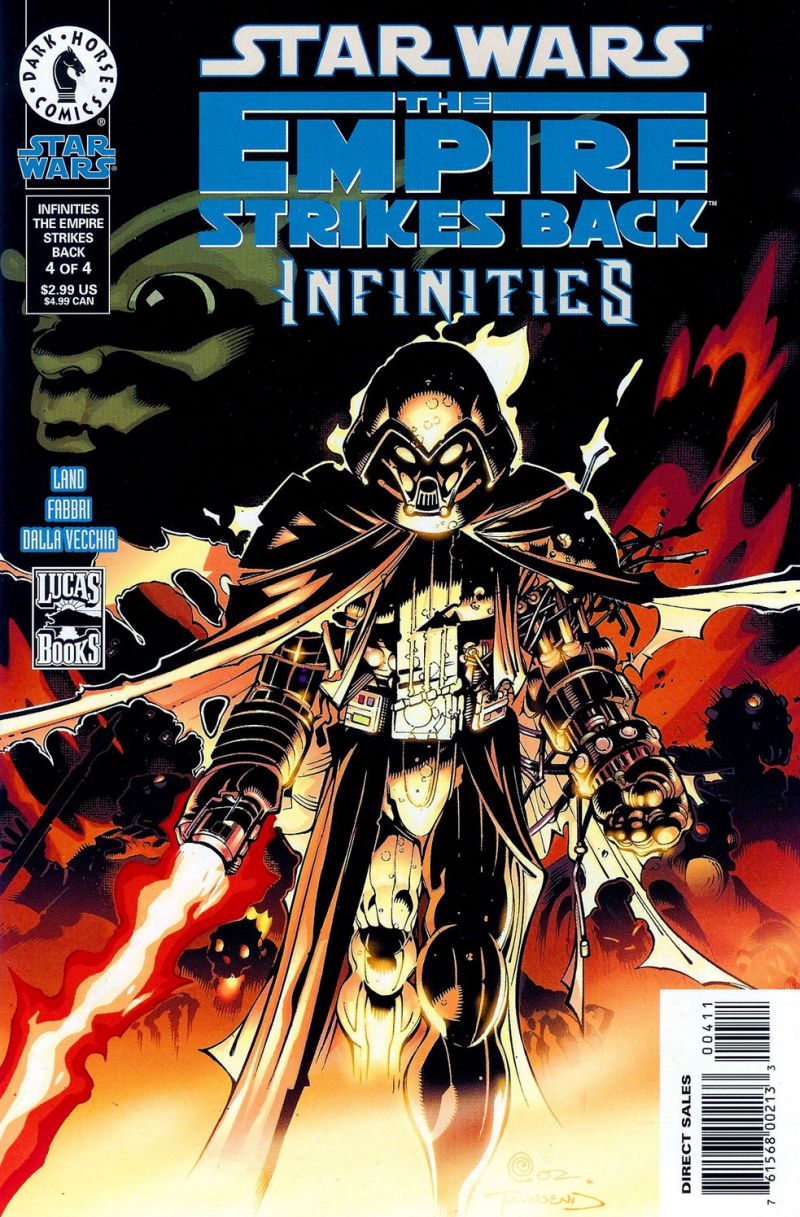 What is it ? : Leia is completing her training under Yoda, levitating in the air when she senses the location of the crystal she needs to complete her own lightsaber. Yoda confirms that he seeded it in the Dark Side cave when she first arrived, and sends her off to get it.
As she departs, Darth Vader arrives, missing her by moments, and demanding that Yoda hands over his son that he senses is here. Yoda blasts him with energy, sending the two of them into Vader's mind. Within his mindscape, Yoda summons up various Jedi, and Vader fights first the older Obi-Wan, then Mace Windu, and finally Qui-Gon Jinn. His own form is twisted by this place into a more stylised version of his armour, which gets broken away by hit after hit, revealing Anakin Skywalker within.
Leia finds the crystal and activates her lightsaber, receiving a vision of Vader confronting Yoda outside the cave, so rushes to help.
Meanwhile, having spent some time retrieving the Millennium Falcon, Han Solo and Chewbacca arrive back at Dagobah wondering if Leia has completed her training.
Vader receives one final hit, and collapses to the group, emerging as the child Anakin from Episode 1, but as Yoda tells him to not be afraid, he attacks. His eyes jet black spheres, telling Yoda that he should be afraid, and Vader breaks free of the Mindscape, slashing at Yoda in the real world severing his arm.
Leia leaps to Yoda's defence, and Vader recognises her as his daughter, and the two fight, with Vader attempting to lure Leia to the dark side with offers of power, but she refuses, saying all she wants is peace.
As he looms over her, telling her she does not understand the power of the dark side, Han arrives and blasts him from behind, causing the Dark Lord to collapse to the ground. Removing his helmet, Vader, now Anakin once again, smiles at her with love for his daughter before passing away.
Yoda tells Leia that she is now a Jedi, before he too passes away, fading into the Force. Leia and Han speak as they build a pyre for Vader's body, and as it burns they walk away to save the galaxy. . . .

High Points : The idea of Yoda taking Vader into his mindscape, where he has to face various Jedi from his past is a solid one, probably based on the original concepts from Return of the Jedi, where Obi-Wan would have manifested and taken on Vader once more as Luke fought the Emperor. However, none of them get any lines, and the psychological battle I've always felt is as important in the fights with Vader.

Low Points : So, Vader gets taken down by Han shooting him in the back? That's not a satisfying ending in any way. And then to make things worse, without him acting differently in any way, he's suddenly redeemed and smiling at his daughter as he passes.
The ending is just so rushed, it's almost as if they realised the remaining page count, and just skipped the redemption of Vader, and just had Han gun him down instead.

In fact there's just so much missing from this issue, Leia gets sent into the Dark Side cave to retrieve her Lightsaber crystal, but she doesn't face any illusions or challenge, seemingly just finding it sitting there. We get the end of the story, without the Emperor being faced down or defeated at all, so Leia and Han still have to fight him at some point. It really feels as if there should have been a fifth issue to give the Vader fight some proper resolution, and then chance to have Leia face down the Emperor and save the galaxy.

So what do you really think ? : While the story had a bunch of really interesting ideas, it just doesn't do anything much with them, and then just ends. They might as well have had Vader have a heart attack, or fall down some stairs and break his neck, as in it's current form it leaves the galaxy controlled by Palpatine, and Vader unredeemed, a wholly unsatisfactory ending.

Final Words : So that's Infinities Empire Strikes Back finished, and only Infinities Return of the Jedi to go. I'm guessing these comics didn't perform that well, as I imagine that if they had we'd have received a set of prequel ones as well, with Infinities Phantom Menace (where perhaps Darth Maul kills Obi-Wan, and Qui-Gon has to raise Anakin), Attack of the Clones (where perhaps Amidala dies in Geonosis, sending Anakin dark side early, but giving Palpatine no control over him), and Infinities Revenge of the Sith (where perhaps Dooku reveals Palpatines duplicity early, leading to a very different encounter between the Jedi and the Sith, or maybe Anakin wins the fight on Mustafar, defeating Obi-Wan and leading to his children facing a whole and healthy Darth Vader in the Original trilogy after Yoda hides them away).