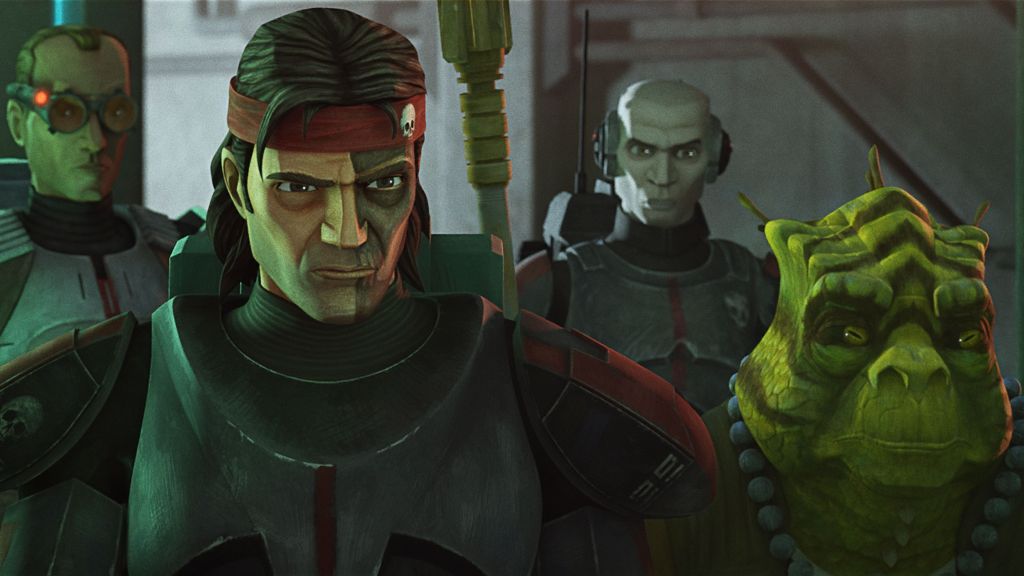 What is it ? : The Havok Marauder is fleeing a number of fighters, having performed a mission for Cid, stealing a lizard. The ship takes some hits, but they manage to jump to hyperspace, and hand the lizard over to Cid, who tells them it barely keeps their heads above water, with the cost of maintenance on their ship, rations, etc. Wrecker and Omega slip out to get some celebratory cartons of Mantell Mix, a popcorn type substance they share and enjoy.
Meanwhile, there are sounds of disturbance outside Cid's office, and they discover Rex who has tracked them down after being told their location by Rafa and Trace Martez (last episode). They catch up with each others stories, but when Wrecker returns, Rex realises from his worsening headaches that they all still have inhibitor chips in them, and they decide they'll get rid of them.
Rex leaves to find a way of removing the chips, while Tech uses scans from Rex (as a chipless baseline clone) to locate the chips in each of their heads. Rex gets in touch, and they leave on the Havok Marauder to rendezvous with him on Bracca (the starting level of Fallen Order).
Landing among the wrecks of Venator Star Destroyers in the midst of being dismantled, they sneak past Scrapper Guild patrols to use the medical facilities of one of the Destroyers. The wrecked ships are hazardous, and they must span a chasm inside one crossing across some cables. But Wreckers larger weight causes the cables to snap, leaving him suspended above a pool of water, and before they can pull him to safety he is attacked by the tentacles of a Dianoga. They force the creature away with blaster fire, winching Wrecker to safety and head onwards to the medical bay.
Wrecker is hesitant to go under surgery, and indeed before they can operate, his chip activates and he attacks the other clones for not obeying Order 66.
He knocks the other clones unconscious, but Omega distracts him with blaster fire, and he follows her, ignoring her pleas that they are friends, and grabbing her blaster, just as he is about to shoot her, Rex stuns him.
They operate on him, but he doesn't awaken, and they wait to see whether the operation was successful, as the only one of them with knowledge of the operation, Rex, has never actually done it, only been the subject of it.
Wrecker awakens, and they continue with the rest of the team, while Wrecker apologises to Omega, saying he fought the chip but couldn't control it. She understands, and shares some Mantel Mix she had in her pocket, as Hunter and Rex head outside.
Rex invites Hunter and his team to join others who are still fighting for (to restore?) the Republic, but Hunter tells him the team has other priorities now with Omega, and Rex understands, telling him that when they've sorted things out their skills would be extremely valuable, and Hunter tells Rex if he's ever in a bind, he knows who to contact.
As Rex departs into the mist, Hunter is spotted by Scrappers Guild workers using Macrobinoculars, who decide to contact the Empire about these intruders. . . .

High Points : It's great to see Rex back, and it was always obvious that he'd show up in this series (and we definitely haven't seen the last of him), and to tell the truth so much more of this episode is just jumping through the hoops that this series has to, the Bad Batch have to get their chips removed. It was obvious that Wrecker would (at least temporarily) turn on the group as his chip activated, and given how many throwbacks and references the series must include, it was pretty obvious we'd get some Fallen Order material showing up.
That said, it's not a bad episode, it's pretty good, made better by the dialogue that the action, it's just all a little by the numbers and obvious.

Low Points : 7 Episodes in and 7 Episodes which have had returning characters from other Star Wars media, and while I love Rex, and there's pretty no way this series couldn't include him, it's all getting a bit tiresome.

Wrecker not wanting to scramble across the cables, and then almost falling into the water as they sneak through the scrapped Star Destroyer, just was poorly done. Having one of his headaches cause it would have increased tension and kept the urgency to remove the chips at the forefront of the story, instead he's just a clumsy big guy, and he's scared of something the kid isn't, ha ha. Such a weak stereotype, when they could have done something relevant to the plot which wouldn't have changed the story much, just improved it.

So what do you really think ? : Nice to see Rex, but it's the most predictable and formulaic of the Bad Batch episodes. Definitely not terrible though, and enjoyable enough, but a big "must try harder" to the writers.

Final Words : So the Bad Batch have been spotted at Bracca, surely this is where Crosshair returns to the story. He's got to realise that the team are likely to be needing Republic medical facilities to remove their chips, so has been waiting for news like this.
But the twist on this is that The Batch are exactly where they need to be to be able to remove his chip and return him to the team . . . .