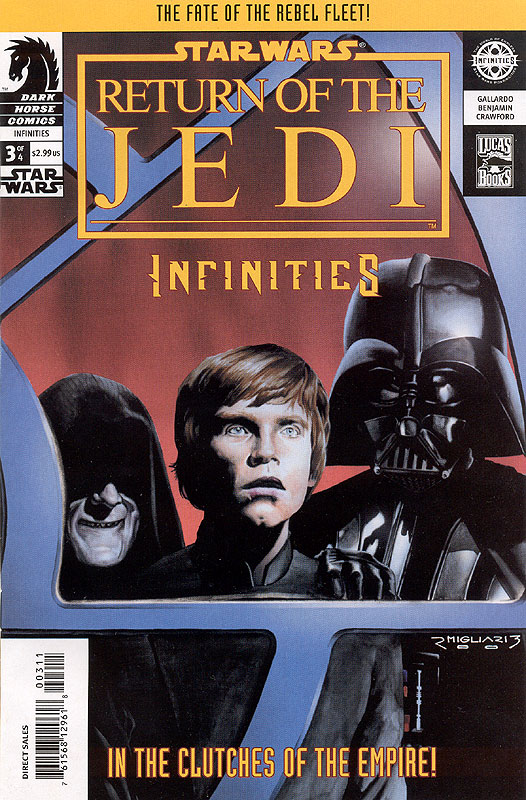 What is it ? : Vader takes Luke to the Emperor aboard the Death Star, where the Emperor tells him that everything is occurring according to his plans, and the Rebels will arrive soon to try to rescue Luke and fall into a trap.
Meanwhile back at the Rebel fleet they are repairing the systems on Han's carbon frozen body and manage to unfreeze him, however he is suffering from blindness due to the long time he has been frozen. The medic takes Leia to one side and explains to her that this is likely to be permanent due to the damage to the controls and time he was in the carbon freezing. But before they can deal with the situation Leia is summoned by Mon Mothma who reveals that the attack at the Death Star at Endor has begun without them and the Rebel team has already landed on the forest moon.
Receiving a communication from the team, who has already sent troops into the Shield Generator, however as they watch ovewhelming Imperial forces arrive, and the rest of the team charges into combat to try to save their friends. They then receive Luke's communication he sent from Dagobah, where he explains to Leia that he is her brother, and that Vader is their father, and then his second communication as he is caught by Vader's Star Destroyer.
Leia wants the Rebels to mount a rescue mission for Luke, but they decide to press on with their attack instead, and Leia storms out of the room.
Aboard the Death Star, Palpatine keeps up his pressure to turn Luke to the Dark Side, but these scenes play out the same way as in the movie with Luke refusing.
Leia takes Slave One and leaves the Rebel fleet and heads to the Death Star, being allowed to dock under Boba Fett's ID, but Leia is captured as she shoots her way off the vessel into a hangar bay.
As the Rebel fleet emerges from Hyperspace and realises it has flown into a trap, Leia is taken to the Throne room, where Luke, Palpatine and Vader await her. . . .

High Points : I like the concept of Leia repeating her trick of disguising herself as a helmeted bounty hunter, although she really doesn't bother trying very hard this time. She gets onto the Death Star while wearing Fett's armour and flying his ship. But doesn't bother wearing his helmet and tries to shoot her way onto the Death Star, which sensibly enough ends in failure. So sadly the writers never actually followed through with the idea.

Low Points : The main concept of the issue makes little sense, so the Rebels are about to attack the Death Star much as they were in the original movie. However this time they've received warning from the forest moon that the shields are up and there's an ambush in place. They know Luke has been captured, and Leia seemingly knows he's been taken to the Death Star with Vader and Palpatine (or at least that's where she goes to rescue him).
So the Rebels are fully aware there's a trap waiting for them, yet they still launch the attack as normal? Even in the original movie Ackbar wanted to retreat as soon as he knew it was a trap. So why do they actually go ahead and attack this time?

And as I suggest above, how does Leia know where Luke has been taken? It could be The Force, but that kind of sensitivity is beyond anything seen elsewhere in the movies.

So what do you really think ? : So we're back into remix territory, where no matter how things have changed, and how much the storyline should deviate from the original movie, everything is just playing out in a very similar manner.
So the Rebel attack is happening as before, but without the heroes on the Forest Moon to deactivate the Force Shield, and instead of just Luke against Vader and Palpatine, we've got both Luke and Leia. Which leads to perhaps the only question about what happens in the final issue. Does the presence of both his children cause Vader to turn back to the Light side quicker, or do we get a four way melee with the twins against the Dark Siders?

Final Words : They do seem to have some interesting ideas in these Infinities stories, but seem unwilling to carry through with them, leading to them just reusing the original stories in slightly altered fashions instead of giving us a totally new offshoot of the story.

So, onto the final issue. Will we get any original concepts in it, or will it just play out as the movies do, but with the characters all just moved around a little.