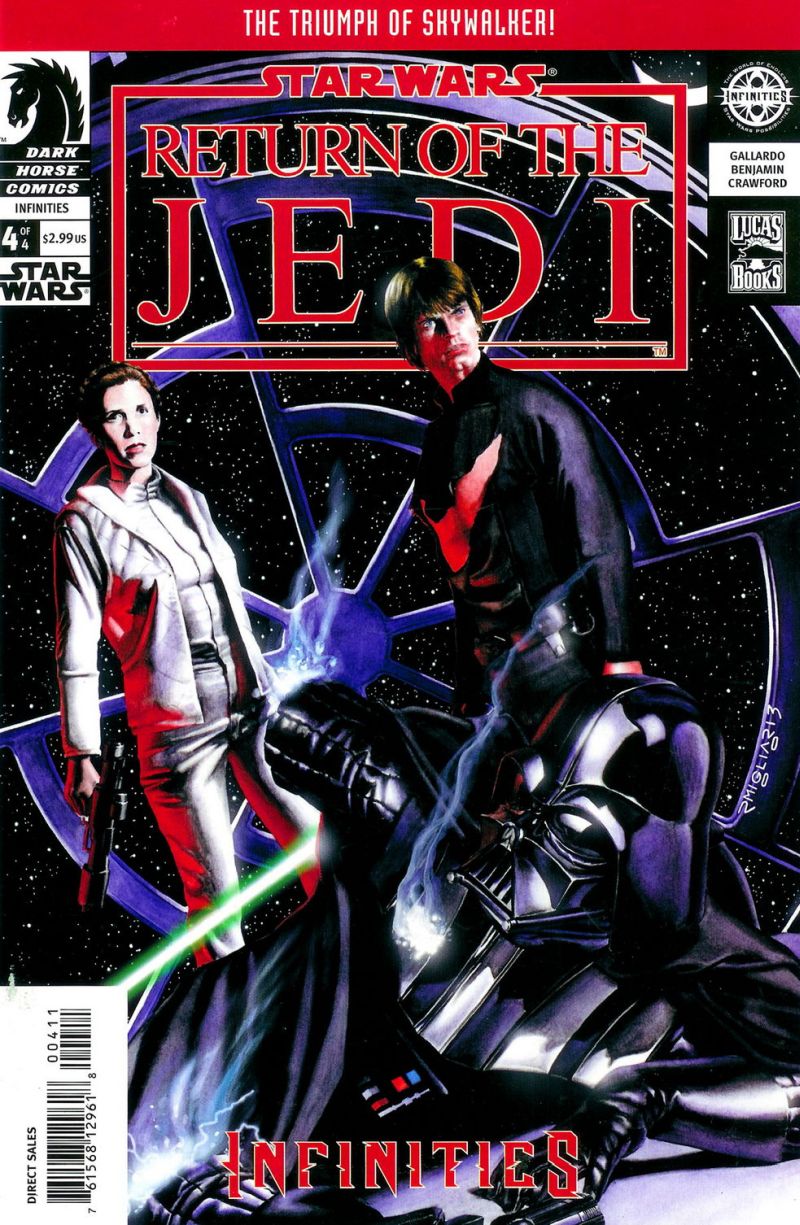 What is it ? : So the Battle of Endor rages, with the Rebels unable to attack the Death Star due to the force field generated down on the planet. The team which was sent before continues their attack on the base but are unable to gain any ground, at least not until they are suddenly aided by the native Ewoks.
Aboard the orbiting Death Star, since Luke is unyielding Palpatine orders Vader to kill Leia, causing Luke to grab his lightsaber and defend her.
On the surface the Rebels plant explosives on the base, which detonate causing it to lose half shields, all of which are then ordered to the defence of the Death Star. In orbit, Lando detects that the force shield around the base has been dropped, so immediately takes the Falcon down into the atmosphere to attack.
Luke and Vader duel, with Vader's superior skill leading to the young Jedi getting a bit of a beating, when Leia leaps at Palpatine only to be thrown away by a blast of Force Lightning. When Luke reveals to Vader that both he and Leia are the children of Anakin Skywalker, something which is unforeseen by Palpatine.
The Falcon makes the attack run towards the shield generator on the Forest Moon, with Han taking the controls, although blind he fires the weapons, relying on Lando to turn the vessel so they hit their targets. Undefended the shield generator explodes, allowing Wedge Antilles and his wingmen to make their attack run on the Death Stars main reactor.
Luke and Vader continue to fight, with Luke severing Vader's arm, but Vader disarming Luke's lightsaber, standing over his children as they huddle together in fear, Vader realises that he cannot slay his children, and freed of the rage collapses to the ground.
Leia and Luke drag him to the shuttle bay as the battle station begins to explode around them, realising that Palpatine is nowhere to be seen, where they discover the Millennium Falcon has landed, and Lando helps them aboard asking if they're sure about bringing Vader.
As the Falcon flies to safety, and Han realises by sound who they have aboard, Vader thanks his daughter for saving him, and the Death Star explodes behind them.
Back at the Rebel fleet, Mon Mothma discusses how the Imperial Fleet is in disarray, but with Palpatine still around that won't last, but the Skywalker twins prepare to hunt him down, aided by their father, now clad in a white version of his Vader armour, and the three decide that working together that Palpatine doesn't stand a chance . . . .

High Points : The action between Vader, Palpatine, Leia and Luke is solid, and plays out pretty well, but the major improvement on the original is the Falcon getting to do a strafing run to take out the Shield Generator (something I always wondered why they never did in the original movie), which breaks down the heroes into relevant parts of the story perhaps in a superior fashion to the movie. So Han, Lando and Chewbacca are in their element in the Falcon, getting to take out the shield generator, while Wedge attack the Main Reactor, and Luke and Leia fight Palpatine and Vader.
We even get to include Lando and Han in the rescue of Luke and Leia from the Death Star, rather than having them steal a convenient shuttle.

Low Points : While I complement the distribution of characters above, I must also say that this new grouping of the hero characters does mean that they only make up members of two of the four groups which now need to exist to take the Battle of Endor forwards. With Wedge leading the Death Star attack now, and completely unnamed characters being involved in the ground battle on the Forest Moon.

Speaking of the ground battle, in the movie, the heroes befriend the Ewok's, who then join in the battle against the Empire. But in this version, the Ewok's just decide to join in regardless, which is understandable, the Empire has invaded their homeworld. But the fact that they take up arms to help one group over the others is kind of odd, since the Rebels and the Empire are all interlopers here.

So, Palpatine gets away, so the story doesn't really end, which is annoying to say the least, and while it's fun to see Vader/Anakin in white, the fact that he receives a seemingly worse wound in this compared to the movie (in the movie he loses a hand, in this an entire arm) yet survives seems odd as well (although he doesn't get Force Lightninged so maybe that's it).

So what do you really think ? : While the events are slightly different, they're so similar that this story comes across as a rip off of Return of the Jedi rather than an alternate version. Events unfold in the same manner, but without any cause this time, such as the Ewok's helping the Rebels.
And the end is completely sequel bait, but without any sequel ever going to be made, with the Skywalker family all set to hunt down Palpatine.

Final Words : So that was Infinities, it had some alright ideas in it, but the series was definitely a case of diminishing returns, as each of the sequels had less and less of interest to it.
I really would have liked if they'd run with the idea, going off in totally different directions, The Empire Strikes Back where it's revealed that since the Force is inside everything, that Han could be a Jedi. Return of the Jedi where they abandon the attack on the Death Star, but this gives Leia time to train and we get the twins as Jedi fighting Palpatine.
They really missed some opportunities and played it safe, which led to the series not being that popular, meaning we never got to enjoy Infinities versions of the Prequels, which could have been fun.