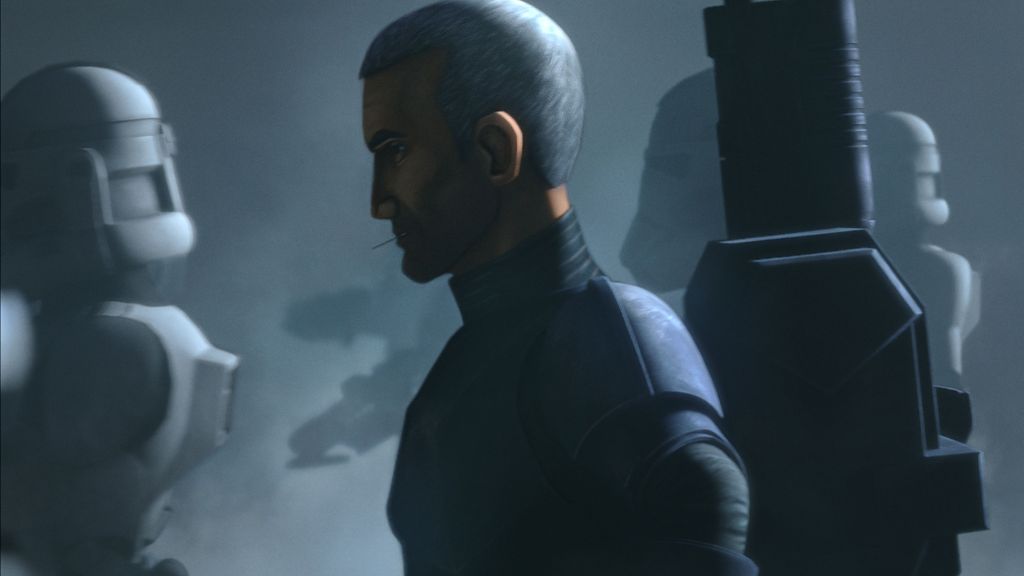 What is it ? : On Kamino, Crosshair approaches Prime Minister Lama Su and Imperial Admiral Rampart to let them know that The Bad Batch have been spotted on Bracca. Rampart orders their elimination against Lama Su's suggestion they might me a valuable asset if captured, but Rampart is not interested and just wants them dead.
On Bracca, Wrecker is teaching Omega how to disarm an explosive, but just as she thinks she's failed and they're going to be killed, Wrecker reveals that it was just a smoke bomb and there was no real danger, reassuring her that he too failed first time, Echo tells them that Hunter wants to speak to them, but as they re-enter the scrapped Star Destroyer they realise they're being watched by some Scrappers, who they manage to stun.
Knowing they must leave soon, Hunter decides they should salvage military equipment from the Star Destroyer as it will get them out of debt with Cid, but Tech suggests that the data in the ships computers could be even more valuable taking Omega with him to the bridge to retrieve it, as the rest head down to the armoury.
In the armoury they discover Capital scale Proton Torpedoes which will be worth a fortune, while on the bridge Tech and Omega download the data from the ships computers when an alarm goes off informing them ships are nearby, and they watch as three Nu Class Shuttles land nearby.
Meanwhile back on Kamino, Prime Minister Lama Su and Nala Se discuss the developments with the Empire, as they want to retrieve Omega unharmed, so they decide to hire additional Bounty Hunter resources to retrieve her.
Sneaking through the ship, the Bad Batch have Tech slice into the Imperial communications which reveal that they're trying to herd them to the landing bays, so Hunter decides to leave through the gunnery decks instead, only for them to discover that Crosshair predicted they would be monitoring communications, so has prepared an ambush.
As they fight against Crosshair and his forces, Hunter realises that the fragile state of the ship could work in their favour, so orders Tech to fire the weapons, which causes the ship to collapse around them, allowing the Bad Batch to slip away, deciding instead to leave the ship through it's powered down engines.
When he recovers, Crosshair predicts this as well, and orders his people to power up the engines, either incinerating the Bad Batch or forcing them out into another ambush.
However, as the engines slowly power up, the Bad Batch plant the explosives they have taken from the armoury, and plant them around the inside of the engine nozzle, causing it to fall to the ground with them inside, and the unfocussed energy from the engines blasts Crosshair and his team, leaving him horrifically burned.
His forces retrieve him, and as he is bandaged, he weakly orders his men to capture the Bad Batch as they return to the Havok Marauder, but the men he has stationed there do not answer.
As Hunter and Omega reach the Havok Marauder, they see all of the forces Crosshair left here have been already dealt with, and they watch as Cad Bane emerges from their ship. He wants Omega, not the others, but Hunter tells him that she's under their protection, leading to a fast draw between the two men.
Cad Bane easily wins the fast draw, shooting Hunter in the chest, and then stunning Omega and leaving with her.
When the rest of the team arrive, they try to awaken Hunter who is badly wounded and delirious, questioning him as to Omega's whereabouts, but all he manages to tell them is that a bounty hunter took her.
In a POV shot, we see the team under fire dragging Hunter aboard the Havok Marauder, and then blasting off into space. . . .

High Points : So, Cad Bane returns, someone who was pretty major early on in the Clone Wars series, but we haven't seen since season 4. Now this really gives me hope that we may finally get some closure for some of the many characters that the Clone Wars just forgot about and ignored their storylines later on. So maybe we'll get Asajj Ventress and Hondo Ohnaka returning, and I'll definitely be up for some of that (although why they haven't just made a Hondo series I don't know).
And Cad Bane comes across as formidable, here's a bounty hunter who was capable of fighting toe to toe with Obi-Wan Kenobi during the height of the Clone Wars, so him being more than the equal of Hunter makes a lot of sense. Hunter while a modified Clone, still underwent the same training, and therefore will share a lot of his instincts with the ordinary Clones that Bane has fought before and studied the tactics of. So I was very happy to see Bane defeat Hunter in the gunfight, out drawing him, and gunning him down.

While it's important for there to be episodes where the team is just living in the early days of the Empire, so we can see what this time period is like. It's nice to return to what appears to be the main plotline of the series, with the Kaminoans wanting Omega back, and Crosshair hunting down the Bad Batch.

Low Points : Okay, 8 for 8 with returning characters, but it's Cad Bane and it's extremely well done, so I'm not going to moan too loudly this time.

Last time we saw Crosshair he was training ordinary humans to become what I'm assuming will be Stormtroopers (although online buzz seems to suggest people think his team will be the first Deathtroopers). But this episode he appears to be just commanding Clone Troopers again!
Is there some reason for this, or did the writers just ignore the squad he was training as it's just not important for this episode?

The superpowers of the Bad Batch seem to have completely evaporated except for Tech's intelligence and Wreckers strength. Hunter used to be able to track anyone, anywhere on a planet, but now Crosshair, someone he knows extremely well and therefore should be able to predict the actions of fairly well, manages to ambush him twice.

So what do you really think ? : A really solid episode, enjoyable with the return of Crosshair as he hunts down his former colleagues, but capped by the masterful return of Cad Bane, who is handled beautifully, making him a real and credible threat to the team.

Final Words : So Omega is missing, presumably being returned to Kamino, although the team isn't aware of this, just that she's been taken. At a guess they're going to call on Rex to help them, which may lead to a return to Kamino for him, and the story of how he ends up with Wolffe and Gregor. In fact it'd be really nice if the return of Gregor is written into the story as they assemble a team to retrieve Omega from Kamino as it'd be great to finally discover the rest of his story between his appearance in season 5 of the Clone Wars and Season 2 of Rebels and his eventual death at the end of season 4 of Rebels.