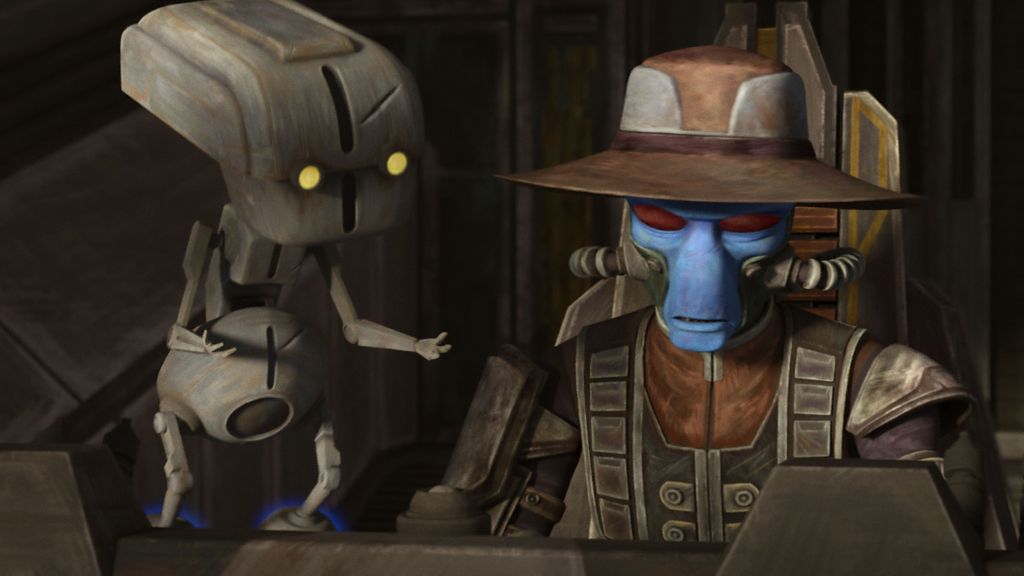 What is it ? : The Havok Marauder is fleeing the Empire above Bracca, as Crosshair piloting a Nu-Class Attack Shuttle pounds it with laser fire. Hunter doesn't want to abandon Omega, but Tech points out that the bounty hunter is long gone, so as their rear deflector screen drops, they jump to hyperspace much to Crosshair's annoyance.
Meanwhile aboard Cad Bane's starship, The Justifier, Omega awakens in a shielded jail cell, and is taunted by Bane's droid Todo, who uses the leg Hunter blasted off as a crutch. When she reaches for her wrist commlink, he tells her it has been locked away, and that Bane does not respond well to prisoners who do not cooperate. Bane himself approaches, introducing himself and telling her that her friends are not coming for her and are long gone.
On Kamino, Prime Minister Lama Su, speaks to Nala Se as Bane informs them he has Omega, and they arrange a collection and his payment on the abandoned Kaminoan facility on Bora Vio. Nala Se suggests she go to meet Bane, but Lama Su thinks she is too emotionally attached to Omega, so sends Taun We instead.
As the Havok Marauder sits in deep space, Echo identifies the bounty hunter who took Omega as Cad Bane, and Hunter questions why Omega is so valuable. Tech tells the group that he has analysed Omega's DNA, and found she is a pure genetic template. Where the rest of the Clones are modified from their originals to grow faster and be more obedient, she is a First Generation clone and unaltered. The only other Clone he knows of which is like that is Alpha, later known as Boba. To track Cad Bane, Hunter suggests contacting Cid and using her contacts.
Aboard the Justifier, Omega offers to repair Todo's leg, but he refuses struggling on, she keeps advising him on how to better repair it, until he gives in and opens the cell to allow her to help. She repairs his leg, but while adjusting his settings to bring it back to full operation she instead shuts him down, searching for her Commlink.
Bane lands the Justifier on the floating platforms among the clouds of Bora Vio, and when he comes for Omega he finds the deactivated Todo, and that Omega has slipped out into the abandoned facility. Omega sneaks through the massive floating structure, calling out for the Bad Batch on her Commlink, and while they can hear her, the signal is weak and they advise her on how to boost the signal, but Bane catches up with her first smashing her commlink.
He takes her to the rendezvous point, but they find Taun We dead on the floor, and are ambushed by Fennec Shand. As the two bounty hunters fight, Omega slips away into a cloning chamber, where she powers up a console and uses the stations communications system to recontact the Bad Batch, letting them know where she is.
As the two bounty hunters battle it out through the city, Omega is chased by Todo, eventually reaching a Kaminoan Shuttle Pod and launching away from the station, but unfortunately it soon runs out of fuel, and plummets down into the clouds beneath, only to be grabbed by the Havok Marauder which rapidly slips away from the planet.
Bane gets back to the Justifier, only to find that Shand has sabotaged it, and he watches as she flies away. Shand contacts Nala Se who hired her and told her where the meeting was taking place, offering to follow the Bad Batch and retrieve Omega once more, but Nala Se tells her that Omega is safer where she is, and to abandon the chase, at least for the moment.
Aboard the Havok Marauder, Omega cannot sleep as she doesn't want to end up an experiment like the ones she saw in the cloning facility on Bora Vio and doesn't want to end up back with the Kaminoans, and Hunter promises her that she won't, as she has them protecting her. . .

High Points : While the action between Shand and Bane is excellent, with them battling through the corridors of the floating city using explosives, flamers, jet boots and every trick they've got up their sleeves against each other, it was actually the setting which impressed me most.
Bora Vio is a gas giant much like Bespin, with massive floating platforms, much like Cloud City. But these are obviously Kaminoan in design, looking like a hybrid between Tipoca City and the other Kaminoan settlements we've seen on their homeworld and Cloud City itself. Both Cloud City and Tipoca are circular disk like structures, so the combination works well, and creates gorgeous looking floating buildings amongst the clouds.

Low Points : I know the settlements on Bora Vio are abandoned, and the standard way of signalling a building is abandoned is by showing that it has broken and cracked windows. But I really have to question their use here, why are the windows cracked and broken? Do space vandals come by to heave rocks through them? Were these structures abandoned due to substandard glazing? Are there storms which are so strong they smash windows, yet does cause these structures to become damaged and drop from the skies?

I also wasn't really a fan of how the Bad Batch themselves were so passive in this episode, these super clones really only collected Omega after she freed herself, rather than having any input to her rescue at all. For a series called the Bad Batch, Omega is clearly emerging as the main character, and I'm not sure I like that, as ensemble casts have served Star Wars animated series far better than just having a single main protagonist (for example Resistance).

So what do you really think ? : I kind of though that Omega would remain kidnapped for multiple episodes, with Bane losing her to Shand, and the Bad Batch being instrumental in distracting Bane, but then having to start again to rescue the child.
I'm also wondering what the revelation about Omega being a pure unaltered Clone means, as it was always hinted before that she was modified in a similar manner to the Bad Batch themselves (and from my opinion to have some kind of super empathy), and part of what connected the Bad Batch to her was that she was basically the same as them. But apparently not any more.
This also shoots down one of the more popular theories on line, that she's a modified clone of Palpatine, but can't be as we now know she's unmodified.

Final Words : I'm not too impressed with where this leaves the storyline, as we just seem to be reset to them working with Cid. But Cid now knows how valuable they are, and has been shown to be very mercenary in her attitude, so it's difficult to see why she won't just sell them out. Especially as their record working for her hasn't been fantastic so far, so they're not proving themselves to be the valuable resource she thought them to be.

But I suppose we'll have to wait and see how things develop.