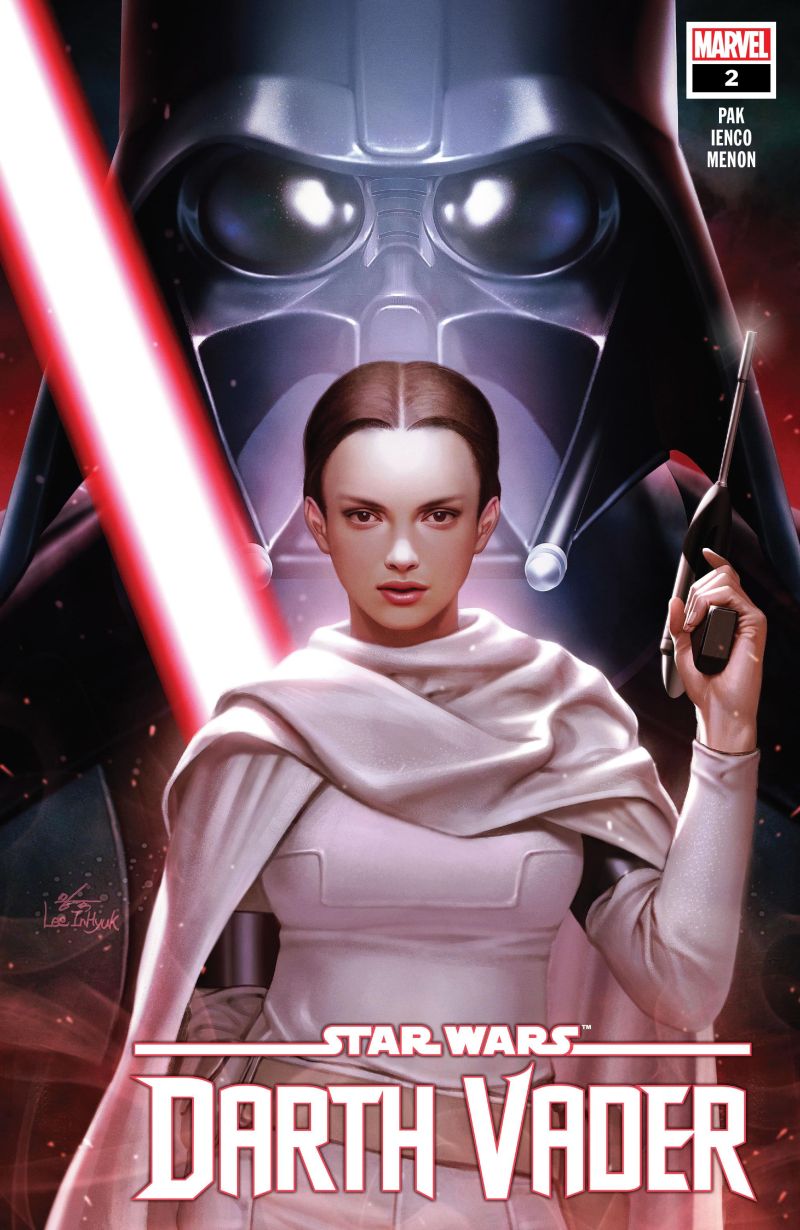 What is it ? : We begin with Vader remembering being with Padme Amidala on Geonosis, the two of them facing danger together as they entered the arena, and Padme declaring her love for him unafraid to face death at his side.
Back in the current time, Zed-67 remarks that the person in front of them bares a remarkable similarity to Padme, down to wearing Naboo style clothing. She asks who the two of them are, and Zed tells her she faces Darth Vader, causing her to immediately open fire with her Blaster Rifle as Zed remarks that she has made a mistake..
Vader easily deflects the blaster bolts, and disarms her, questioning who she is, to which she responds that she is Padme Amidala, Queen, Senator, Daughter of Naboo, back to haunt him to his grave. Vader begins to force choke her, as Zed remarks that she has made another mistake, but Vader flashes back to choking Padme back on Mustafar, and lets her drop to the ground.
She grabs her Blaster Rifle and flees the room, with Vader and Zed in pursuit, only for them to be ambushed by Vendaxian Land Squid, made aggressive and territorial by their once every 10 years breeding season.
Vader easily defeats the couple of creatures which ambushed him, following the woman down into the lower levels of the building, catching up with her, and telling her to be afraid, as he once told Padme on Geonosis, but she responds she is not afraid, she is angry.
Vader realises who it is he faces, one of Padme's bodyguards, the Queens Shadows and Handmaidens from Naboo, who guarded her from when he first met Padme on Tatooine and before. Zed analyses her, spotting the differences, a more pronounced jaw, slightly taller, a deeper voice, she is Sabe.
Vader questions her, telling her that she broke into Padme's quarters on Coruscant, she wanted to know who had killed her, and he wants to know what she found out.
She finds this questioning odd, as she is sure the Empire killed Padme for standing against the Emperor. Vader assures her that this is not the case, as Padme would have joined the Empire, and that Sabe's desire for revenge aligns with his desires, so they could work together to find the truth.
She is sceptical, but hesitantly agrees to work with him, although the urgency is increased as they are attacked by a horde of Vendaxian Land Squid, and have to fight side by side to defeat the creatures.
They fight their way out of the building, and Vader heads for his shuttle, but before leaving Sabe wants to bury her team, telling Zed to help, something he complains about as he is not designed for manual work.
As they complete the cairns for her team, she says that they were good soldiers, but Zed remarks that they were Rebels and Traitors, but Sabe insists they were good soldiers who attended Padme's funeral, and unlike her and Vader, they will be mourned, agreeing to work with Vader so he can serve his Emperor and she can have her revenge.
Aboard Vader's Shuttle, she reveals that after the funeral, she broke into Padme's residence and took the security recordings, but could never decrypt them, something that Zed remarks would be easy for him. She says that they hid the recordings on Naboo, as they were involved with the fight against the Empire and were required elsewhere. And Vader remembers after his wedding to Padme on Naboo, she told him to not be afraid, and he thinks the words from Sabe, I'm not afraid, I'm angry. . . .

High Points : The use of Sabe the Queen's Handmaiden from The Phantom Menace is fantastic, as the entire plotline where Amidala had look a likes to protect her from assassination attempts was pretty much forgotten in later movies, so finding out what happened to at least one of them is brilliant.

And once again the issue ties the events of the movies together with the action, as words between Anakin and Padme link to current events with the dialogue flowing smoothly between memory and action. It really makes these stories feel like part of the movies, just a part we never saw.


Low Points : But although I love the use of Sabe in the story, I'm not a big fan of how she's used. Padme was indeed the Queen and Senator of Naboo who died during the events of the Rise of the Empire, so it is easy to draw a connection between the two. However that totally ignores the fact that Palpatine was also the Senator from Naboo, and was a long time confidant of Padme's.
It makes sense if we were shown Sabe witnessing Padme's doubts about Palpatine, her actions in the early formation of the Rebellion against the Empire. However, those scenes are never seen.
So from the point of view of the Naboo, their guy, Palpatine became Chancellor. He fought the Clone Wars. He was attacked by the Jedi, and forced to form the Empire for everyone's protection. During the Jedi rebellion, his close confidant and ally, Padme Amidala, was killed, so probably as an attempt to get at Palpatine.
It seems overly simplistic to say, Naboo people Good, Palpatine and Empire Bad, so the Naboo dislike Palpatine. Where in reality, he's more local guy done good., their guy who runs the galaxy.

So what do you really think ? : This issue was a lot weaker than the first, while still remaining interesting. They threw a lot of unnecessary fighting into the story, to keep the action quotient up, but really the story didn't need it. But without the action, the story is still lacking, as it's pretty much all exposition. Obviously the writers knew the issue was lacking something, so threw in some action in the hope that it would fill the gaps.

Final Words : So they're off to Naboo. The way this story is piecing together the background, and taking Vader on a tour of background scenes, characters and events to fill in the greater story of the moves is fantastic. Both Vaders visit to the Lars farm on Tatooine, and his meeting with Sabe, the Queens Handmaiden and Double, make so much sense that they would occur at some point, and even though I thought this issue wasn't as good as the first, I'm still intrigued by the story and want to see where it goes next.