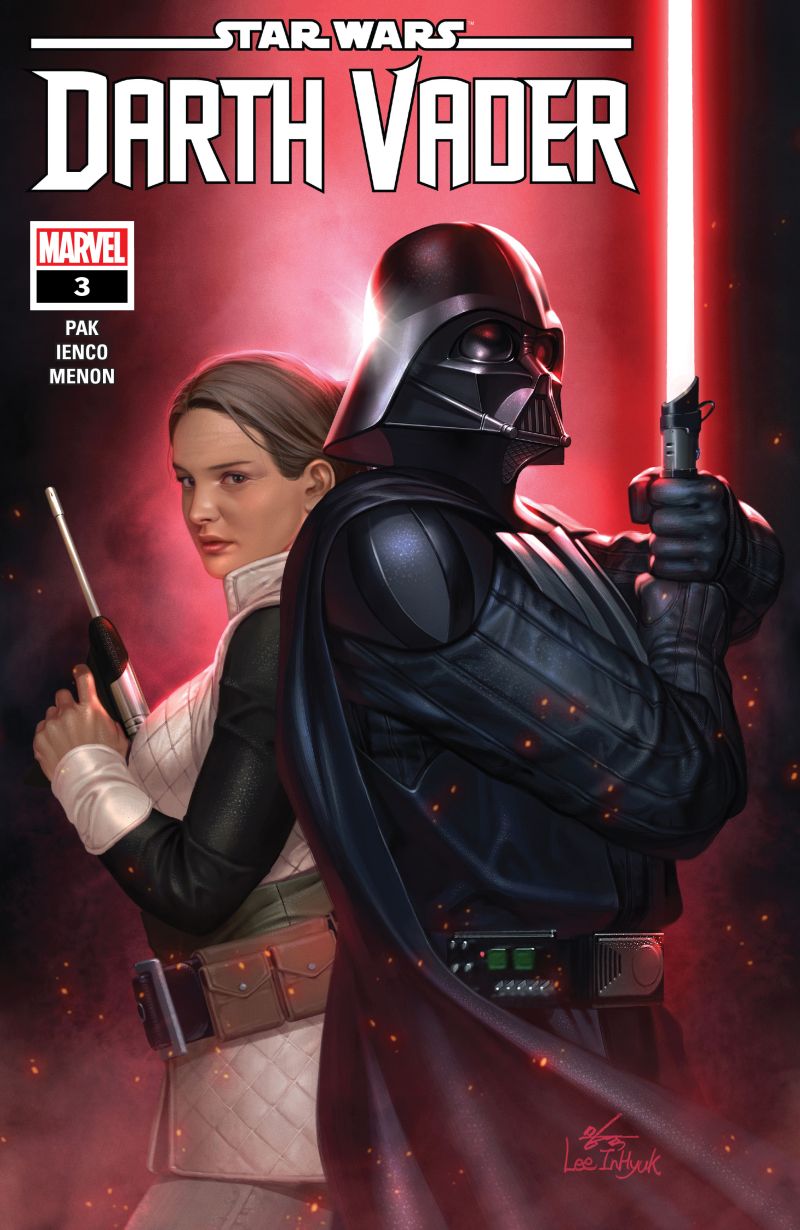 What is it ? : Vader stands in the idyllic fields of Naboo, butterflies peacefully flying past, the lust green grass of the fields and mountains in the distance all under a blue sky filled with wispy white clouds. He remembers picnicking in these fields with Padme, when Sabe brings him out of his reverie, telling him the Naberrie residence is nearby, so he orders Zed-67 to come with him, and the Death Troopers to secure the area as he and Sabe set off for the building.
Inside the building it is abandoned, with foliage growing unchecked and leaves lying on the floor., and Vader remembers eating here with Padme as they flirted and fell in love, when suddenly they come under attack. Vader force chokes the one of the two attackers, but Sabe begs him to stop, telling him it is all a mistake, something that Zed agrees, their mistake.
He drops the figure to the ground, and Sabe reveals that it is Gregar Typho and Captain Tonra, both once responsible for Padme's security, asking them why they attacked when she had signalled not to. But they reveal that they saw Vader and assumed she was under duress. Vader considers still killing the two men, but they reveal that Sabe doesn't actually know where the recordings are, only these two men do, so Vader spares them.
They lead Vader down into a hidden basement of the building, speaking about all the assassination attempts they stopped on Padme Amidala's life, remarking they were helped by a Jedi Knight named Anakin Skywalker, who later himself was killed.
In the basement there is a aged yet functional Gungan Bongo Submarine, and they board it and set off into the deep waters of Naboo. As they travel, Zed-67 attempts to fill in his records on the two men, as their histories after the Trade Federation aren't well recorded. Panaka tells them that he was responsible for Padme's security right until her death, when she left for Mustafar for private reasons, although he thinks he should not have allowed her to go. Tonra reveals that Padme once sent him to Tatooine, as Jedi Skywalker's mother was still a slave there, and she wanted her freed, but he couldn't track down where she had gone, although managed to free a few dozen others, telling Zed that it their greatest shame they couldn't do more.
With a crash the Bongo is attacked by a massive Colo Claw Fish, and as the Submarine bursts open they all swim free, and Vader strikes the massive creature making it bleed which attracts others of it's species who tear it apart.
Fortunately they are close to their destination and swim down to a dome of Gungan construction, and inside they find it decorated commemorating the alliance between the Naboo and the Gungans which defeated the Trade Federation.
Vader pauses, looking at an image of himself as a child, and Sabe explains that this is Anakin Skywalker, who disappeared around the same time as Padme, and they mourn his loss as well.
They retrieve the recordings, but when played they show Sabe, Typho and others swearing as a group revenge on whoever killed Padme, calling themselves the Amidalan's. Vader demands an explanation, and they know that Padme and Skywalker went to Mustafar, and that Padme died and Skywalker went missing, and Mustafar is Vader's domain, so they accuse him of killing them.
Vader agrees that of course he did, and Tonra presses a signaller button causing a Giant Sando aqua monster to attack the dome . . . .

High Points : Again the way the story weaves it's way through the prequels is wonderful, and we journey through places we've seen before, as they revisit the Naberrie house, and into the oceans into a Gungan dome.
Zed-67 does a lot of the heavy lifting in this issue, as his constant questioning reveals the background story as he babbles constantly about what he knows of events, and attempts to complete his knowledge on those events we never witnessed before.
One of those things is Captain Tonra being sent to Tatooine by Padme to try to free Shmi Skywalker. This does fill in a gap that many had questioned, as to why the Jedi or the Queen, both fairly well off groups, never returned to Tatooine to free Shmi. Although Jedi aren't supposed to have attachments, it was definitely going to remove a burden from young Anakin's mind if he knew his mother was now free and living somewhere in comfort. So it's nice to know at least Padme made a token effort to help her.

Once again the flashbacks are perfectly placed, as Vader remembers people as they're mentioned, and remembers places and scenes when he returns to them. It's also quite fun to have him find what is virtually a shrine to the memory of the child Anakin who helped save Naboo, and for the disconnect between who he is and who he was be so great that the people around him explain who he is looking at.

Low Points : My first problem with this issue starts on the cover, a lovely image of Vader and Sabe fighting back to back. However, the image is not of Sabe, as portrayed in The Phantom Menace by Keira Knightley, it's obviously Natalie Portman's portrayal of Padme Amidala. Now we know by this point that it's not Padme, but Sabe, and the only reason for this image to be drawn this way is to try to drag in readers who haven't been reading the series, as they might wonder why Vader and Padme are together. But that's a con, and it annoys me.

I'm also still not happy of the motivations of the Naboo characters, as they're out for revenge for Padme's death and squarely blame Vader and Palpatine, although I have no doubt that Palpatine would have spun her death as an attempt by the Jedi to get at him, since he is also from Naboo. It's just so obviously written as Palpatine is a bad guy, the Naboo are good guys, so they must automatically hate Palpatine. Even though part of what makes Palpatine interesting is his disguise as a good guy, who uses the good guys by manipulating them.

So what do you really think ? : Still not up to the heights of the first issue, this one at least doesn't have a fight thrown in for no reason, and flows a lot better than the second.

Final Words : For a cliffhanger ending, the use of the Sando aqua monster is a bit weak, as we obviously know Vader will survive, but more than that, it's just a big fish, hardly a real threat to him.
But now we've got a hidden cult of Amidalan's who want revenge of Vader for the murder of Padme, and the murder of Anakin Skywalker, with Vader playing up to their accusations against him, the story could go in a very interesting direction and I look forwards to further adventures on Naboo, and what other characters from the movies turn up (I'll admit I'm kind of hoping for an aged and bitter Jar Jar here).