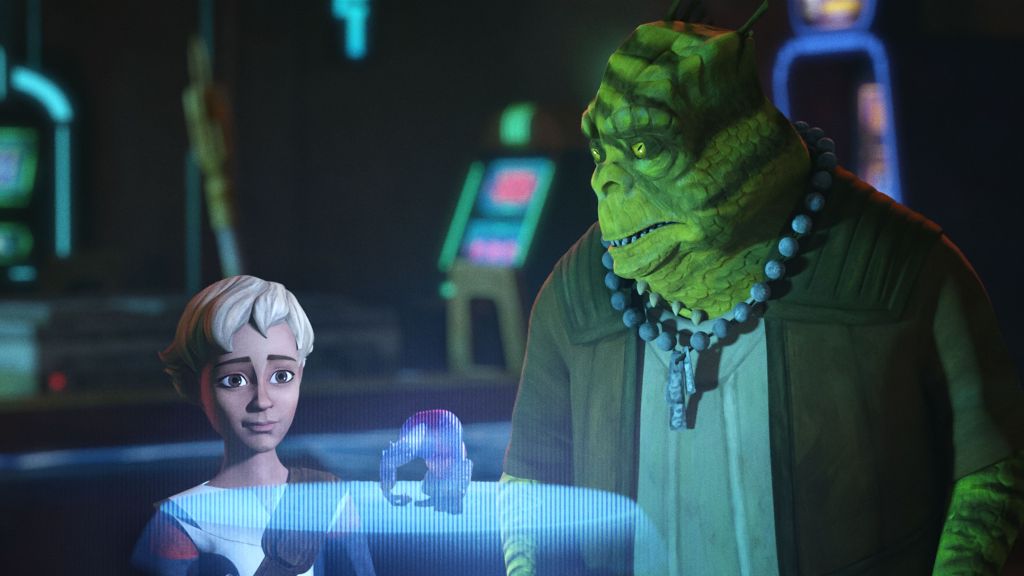 What is it ? : The Empire has taken control of Raxus Secundus, the former capital of the Confederacy of Independent Systems. They are holding an assembly where they are announcing new rules such as a curfew, and to promote that they are there to bring peace after the ending of the Clone Wars.
They bring out Senator Avi Singh to publicly support the Empire, but when he is speaking he decides he cannot support the occupation, so is dragged off much to the annoyance of the crowd, who are then dispersed by Clone Troopers and AT-TE's. As he is removed, his droid, GS-8 follows his previous instructions for such a circumstance and leaves to follow it's orders.
The Bad Batch are returning to Cid's after a successful mission, and are discussing that two bounty hunters are searching for Omega so they need to lie low. However Cid has a highly paying mission for them, and when Hunter is hesitant to take her into combat again, Cid offers to look after the girl, telling them that she is motivated by profit as the contract is worth a lot to her.
They leave Omega behind, and head to Raxus Secundus, somewhat aggrieved that they are now working for former separatists, and meet with GS-8 who wants them to rescue the Senator and smuggle him off the planet.
They manage to break into the palace and rescue Senator Singh with relative ease, however alarms are triggered, and they are forced to steal an AT-TE to blast their way out, but it becomes disabled by another walkers, leading to a desperate firefight as Tech attempts to re-enable their walker. They eventually get cornered in a dead end, but the Senator lets them know where to place explosives, allowing them to slip out through a side tunnel collapsing it behind them.
Meanwhile on Ord Mantell, Cid is playing Dejarik and losing, when Omega who she has put to use cleaning the bar, offers some advice and she wins easily. Cid questions her on how she plays so well, and Omega reveals that it is just strategy, something she is naturally good at, which gives Cid an idea.
Escaping from the city, the Bad Batch, Senator Singh and GS-8 return to the Havok Marauder, but Singh is hesitant to abandon his homeworld and people, but they convince him that he can do more good by surviving, so he leaves with them.
They arrive back at Cid bar, to find that she has put Omega to use winning games of Dejarik in gambling tournaments, where they discover she has cleared all of their debts to Cid. As Cid takes the Senator away to discuss payment, Hunter makes a wager with Omega that they'll never leave her behind again if she beats him at Dejarik, and the screen fades out.

High Points : This really felt more like an episode of Rebels to me than the series has before, with the team rescuing a political figure who has stood up against the Empire, we're in territory that we're familiar with.

The action and dialogue is snappy, but does all feel a little generic and formulaic, although there is a fairly good use of tension as the Bad Batch get involved in a quite heavy battle with walkers.

Low Points : Now I've wondered a lot about what's happening on the Confederacy worlds now the Clone Wars are over, and we now discover that they're not really getting treated any worse than the former worlds of the Republic.
They led a war against the Republic, and the Empire is it's successor state, so I expected them to be treated quite brutally, with the Empire crushing these worlds into exactly what it wanted rather than need to be a little more politic as it did with the Republic world. But we now see that the Empire is keeping Separatist Senators in power if they work along with the Empire, allowing public gatherings and the like.
I really expected a more Berlin 1945 vibe to Raxus Secundus, with burned out buildings, and a crushed defeated people. Somewhere the Empire didn't need to pretend to be nice, and could just get down to the brutal control that it really desires.

There's also the fact that Senator Singh comes across as a nice guy, this was basically Count Dooku's right hand man, as Dooku led the CIS, and Singh led the Capital of the CIS. Which doesn't really seem like a role where you could be of a radically different political view. Now while the politicians of the CIS kept their hands quite clean, as obviously their armies were droids, so there were no messy body counts coming back from the military campaigns, no lists of citizens children who'd died. But I still find it hard to believe that the supporters of a Sith Lord, would be completely innocent.

I'm also not a fan of Omega being naturally good at Dejarik, just because she's a natural strategist. Especially as there always seems to be just one move she can make which takes all of the opposing pieces, more like she knows the cheat code to the game tables than knows how to play (how can opponents not see there's a winning move open to her when there's only one of her pieces in play, and only two of theirs, the game looks like Chess, and any such move should probably be quite apparent),

So what do you really think ? : This episode feels like a missed opportunity to see a defeated CIS, instead we just get another world under the boot of the Empire, like virtually every world we saw in Rebels.

We also get the plotline of them being in debt to Cid, and therefore being forced to work for her thrown aside, because Omega's good at a game.

Final Words : So we're getting quite close to the end of the first season, with 6 episodes to go and the next one called "Devils Deal", going by the standard formula of Star Wars animated series, we're going to get a few plotlines tied up over the next couple of episodes, and the scene set for the season finale. So the real question is, which "devil" will they have to make a deal with . . . .